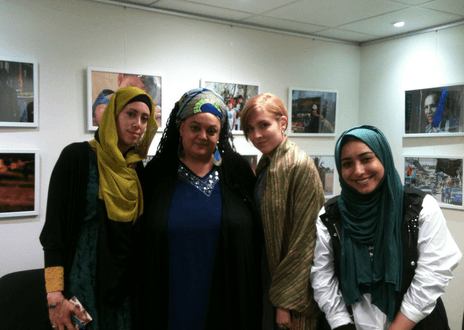 The panel were welcomed by a full room ready to discuss the subject on hand. The discussion opened with a message from photographer Muhsin (Jak) Kilby who himself has been to Palestine several times in different capacities. Each of the panellists – who were artists in their own right – had brought select images to show to the crowd.  Nasreen began the conversation with a still image from a viral video clip that displayed violence and aggression. Sara, Aimee and Zita all had images of their own work to show the audience – both Sara and Aimee had recently travelled to Palestine while Zita had painted an image from a recent pro-Palestine demonstration.

The conversation that ensued was very relaxed with many members of the audience comfortable voicing their thoughts and opinions. A debate resulted with some wanting to recognise the importance of documenting Palestine in order to ensure that the narratives of the Palestinian people are maintained and not forgotten. Others felt differently, pondering whether we as activists are in fact hindering the ‘the struggle’ through our current conventional means of support. Do we instead end up fetishising the Palestinian people through our art and photography? Zita Holbourne brought up the topic of the Barbican’s human zoo – a piece of ‘art’ that is purported to document history but is instead simply reproducing and recreating a racist and oppressive structure.

The discussion had initially been about photography and documentation but it evolved into so much more with new ideas pushed to the forefront. It was an enlightening event that showcased the importance of discussions of this nature as they allow us to be critical of ourselves as activists.