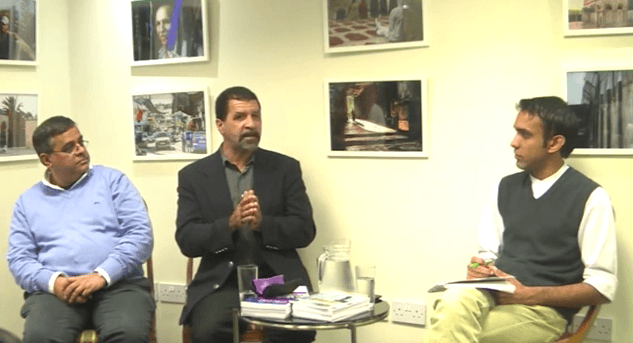 Read the summary of the launch and links ot the books, after the video.

11 October 2014 saw IHRC host the launch of a new book series ‘Decolonizing the Mind’ with contributing authors Sandew Hira and Stephen Small both in attendance. The series has been set up by the International Institute for Scientific Studies and focuses on the legacy of colonialism in knowledge production and distribution as well as the relevant social movements that struggle against this legacy.

The first two books in the series were recently launched: ’20 Questions and Answers on Dutch Slavery and its Legacy’ by Stephen Small and Sandew Hira; and ’20 Questions and Answers on Reparations’ by Sandew Hira. Each author gave a brief presentation on the books they were involved in producing. The topic of slavery was intrinsic to the discussion taking place and it was immediately noted that transatlantic slavery was different to anything of its kind that had occurred before it. It was not only a case of physical enslavement but mental as well. This is explored in much greater detail in both books in the series.

The authors also talked about the case for reparations – detailing the arguments typically made against it and then systematically debunking each of them. Speaking about the problems with current mass knowledge production, Stephen Small stated that they disagreed with the dominant ideology in schools and universities regarding the definitions of terms like ‘slavery’, ‘racism’ and ‘colonialism.’ He even spoke about his childhood growing up in Liverpool, tying in his lived experience to the material being presented.

A Q&A with the audience then followed. It was a lively discussion where participants probed old thought and proposed new ideas. Questions were asked about Islamic slavery, terminology, reparations in the context of abolition and the depiction of slavery in popular culture was addressed as well.