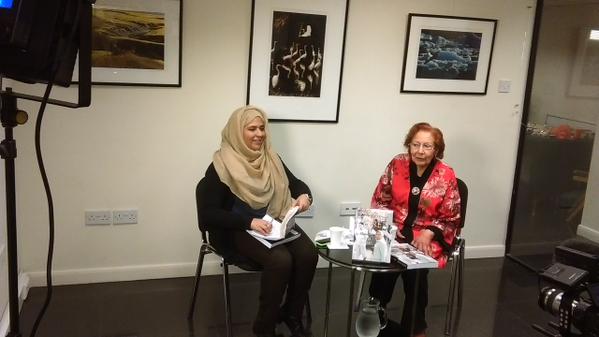 On 3 September 2015, IHRC hosted an Author Evening with the legendary aid worker Saida Sherif. Having lead a life that spans World War II, the Partition of India and the genocide in Bosnai – Saida treated the audience to a host of stories both moving and enlightening.

Her memoir ‘Sparks of Fire’ was recently published and IHRC’s Author Evening was a chance for her to expand on her work in more detail, share memorable accounts and relive important memories. The event was well attended by those who especially wanted to pay tribute to the life of a woman who has spent the past many decades helping those who are helpless.

The event began with Saida reading a specially-prepared speech where she thanked everyone for coming and spoke of her intention in writing ‘Sparks of Fire.’ Her hope remains that the younger generation will be ready and willing to take up her mantle. The message that remained throughout the evening was the importance of caring and aiding those who are suffering in whatever way we can.

Moving chronologically as she did with ‘Sparks of Fire’, Saida discussed her early years and life in Geneva after being raised in India; her struggle to adapt and knowing that what everyone wanted was for her to be a “European wife.” The same challenges were thrown at her when she moved to the UK but this time it was while raising her children. Admirably she says it was her own children who helped instil and develop her Faith through their personal love of Islam.

Saida also detailed the harrowing work she did in Bosnia – the awful things she saw, the sorrow witnessed and the powerful hope too. She has since been involved in numerous educational projects throughout the world – setting up schools in many different countries. Her contributions have been vital and she spoke at length about the trials; the ups and the downs.

It was a moving event that brought tears to Saida’s and the audience’s eyes.