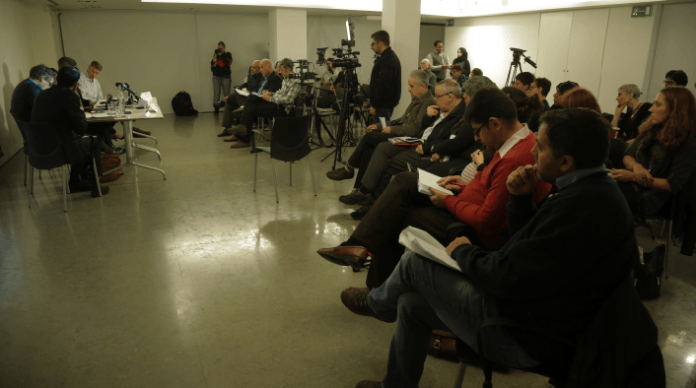 IHRC launched its second UK-wide study, ‘Environment of Hate: The New Normal for Muslims in the UK’. It is an indispensable work which draws on rigorous survey findings and academic studies to address the candid realities of Muslims in Britain based on thoughts and experiences, the normalisation of Islamophobic rhetoric and increasing anti-Muslim hate crime.

Held at the P21 Gallery in London on Tuesday 17 November 2015, we had a panel of speakers including co-author of the report and Head of Research at IHRC, Arzu Merali, Head of Advocacy at IHRC Abed Choudhury, journalist Peter Oborne and academics Nisha Kapoor and David Miller. It was chaired by IHRC’s Raza Kazim. We were joined by a number of academics, community activists and journalists as well as press including Al Jazeera Arabic, Al Jazeera English, Press TV and IRNA London, to name a few.

Arzu Merali began with a brief background to IHRC and how problems of Islamophobia were present back in 1997, when the organisation was set up. Arzu introduced the report, providing an overview of each chapter with a focus on chapter five which consist of the key findings in experiences; it does not paint ‘a happy picture’. Reflecting on the report findings from the 2010 report, Arzu made mention of the levels and patterns of types of discrimination which have doubled and frightening statistics such as, the percentage of respondents who experienced physical attacks rose from 14% in 2010 to 18% in 2014 and a staggering 94% of respondents saw negative stereotypes of Muslims in the media in 2014.

What the report argues, Arzu states, is that we are living in a myth of a post-racial society which ignores structural racism and unless we realise that, we are not going to do more than scratch the surface of the issue. As well as drawing upon recent events and developments in policy, Arzu highlights the cultural and paradigmatic shifts and the tiring arguments that it is communities that are backward and problematic and it is up to the community to change the situation. In this way, the government institutions do not bear responsibility for the way such communities are being treated. We end up with laws that treat people differently, for instance anti-terror legislation, the Prevent strategy and this is also seen in events like the Trojan Horse scandal. Furthermore, Arzu explains political discourse and media discourse do not help the situation. Arzu ends with discussing some of the recommendations which can be found in the report.

Raza made mention of the recent atrocities and killings that have taken place over the last few days in various parts of the world and that we condemn all violence equally in that respect. The discussion was opened to the audience whereby the panel answered questions and comments regarding the relationship between Islamophobia and racism, incidents of violent hate crime and the processes of dealing with acts of discrimination.

Next to speak was Peter Oborne who writes a weekly column for Middle East Eye and The Daily Mail, said a few words about Islamophobia being a structural problem and the utilisation of ignorant terminology amongst the official state apparatus.

Nisha Kapoor, a lecturer in Sociology at the University of York, discussed the anti-democratisation that is taking place and criminalisation of sections of communities as one of the most effective strategies for retaining racism and racial hierarchies. Touching upon disenfranchisement of communities through imprisonment, Nisha made mention of starkly disproportionate ratios in Britain whereby Black people comprise less than 3% of the total population in the UK yet they make up 13% of prison population and likewise, Muslims constitute about 4% of the British population they also make up 13% of the prison population.

Furthermore, Nisha highlights strategies like Prevent and Channel criminalise Muslims on the basis of suspicion, religious profiling and display of political dissent on British foreign policy and criminalisation as such has been passed as reasonable.

David Miller is a Professor of Sociology in the Department of Social and Policy Sciences at the University of Bath and he argued that the British state has not always been the best in standing for the underdog. Drawing on the report, David was critical of government policies, such as the counter-terrorism legislation and Prevent strategy, are key in disadvantaging the Muslim communities. He asserted that racists are a product of decisions made by people in positions of power, which systematically and structurally disadvantage Muslims even though they may not be Islamophobic. Furthermore, David stated such policies have not evolved as a result of a Conservative/coalition government but elite organisations and think tanks such as the Henry Jackson Society push the government away from dealing with terrorism and those engaged in political violence. Rather, the focus is geared towards non violent extremism and fostering the notion of nationalism.

Abed Choudhury, IHRC’s Head of Advocacy, completed the event by expanding on the work of IHRC’s advocacy department which goes hand in hand with research work. Abed mentions the cases IHRC receives deal with Islamophobia in all walks of public life, including in schools, education and employment and provided examples of such cases.

Lastly, we screened a video on anti-Muslim hatred in the UK, based on the findings of the study which can be viewed HERE

To read some of the media coverage CLICK HERE

To find out more about the study CLICK HERE