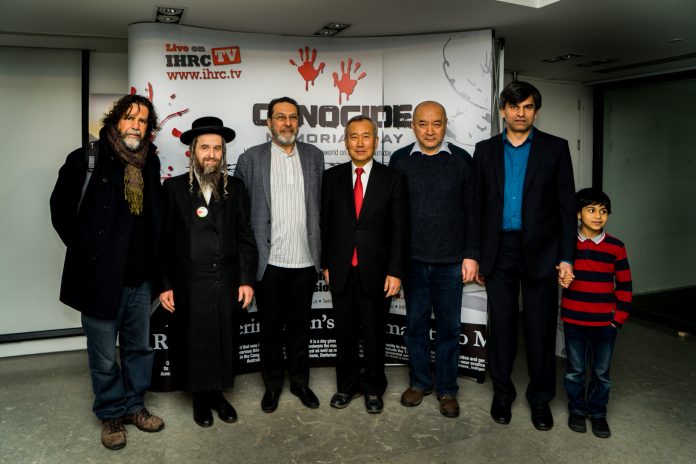 The Islamic Human Rights Commission held their annual Genocide Memorial Day conference for the 6th year running since its inception in 2010. Every year attendance grows, as does global media attention and reporting from it, and this year GMD continues to grow as a global event with Birmingham, Paris and Brussels joining in with simultaneous events. The theme for this year’s event was ‘Genocidal Weapons’.

More than 50 attendees packed the conference room in Central London, with the conference opening up with a message from Raza Kazim, one of the managers at Islamic Human Rights Commission, of avoiding the creation of a hierarchy of victims of genocide. Additionally, there was an emphasis on the need to commemorate the deaths of the many victims of genocides not known to many.

Before starting with the first panel, consisting of Dr. Amina Inloes and Dr. Enver Tohti, we had a spoken word performance by Mizan The Poet. Mizan spoke of his encounter with the concept of genocidal weapons, for the first time in his life, when he heard of the white phosphorus attacks in Iraq. This left him feeling distraught but also became aware of the possibility and consequences of owning genocidal weapons.

Dr Amina Inloes, a teacher at the Islamic College, and an academic specialising in Islamic history and the particular history of women. She explored the notions of genocidal weapons through the prism of Islamic Law with the use of various hadiths and Qur’anic verses. The questions and answers to her talk were related to the contemporary issues related to the Middle East as well as the complexities surrounding the use and ownership of genocidal weapons by different nation-states.

Dr. Enver Tohti, a cancer surgeon by profession who, between 1994 and 1996, secretly and systematically recorded the details of cases of cancer, after he became alarmed at the disproportionately high rates of the disease amongst Uighur patients. Through his power point presentation, Dr. Tohti explores the sites where the nuclear tests took place across China and the impact they had on the civilian population within the vicinity of those sites. Furthermore, he spoke about his ban from various countries in Central Asia since his exposure of the government’s activities with nuclear weapons.

The second panel consisted of two speakers: Professor Ramon Grosfoguel and Dr. Tadatoshi Akiba. During the break the IHRC’s annual poetry competition for children ages 11-18 was promoted on our slides. The winner’s prize includes an all expenses paid trip Bosnia.

Professor Grosfoguel, a professor in the Department of Ethnic Studies at the University of California at Berkeley, elaborately spoke about the expansion of Christianity through establishing Christendom as a power house via violent means in order to establish power and control over populations deemed sub-human. He explicitly differentiated between Christianity and Christendom where the former is the reference to the religion and the latter referring to the creation of an entity clearly marked by using the former.

Lastly, he was followed by the former mayor of Hiroshima, Dr. Tadatoshi Akiba who shared some detailed stories of the impact of the bombs dropping in Hiroshima. He spoke of his tireless campaign to encourage countries to dismantle the ownership of nuclear weapons and to learn the lessons from the history of Japan, especially with the focus on Hiroshima and Nagasaki.