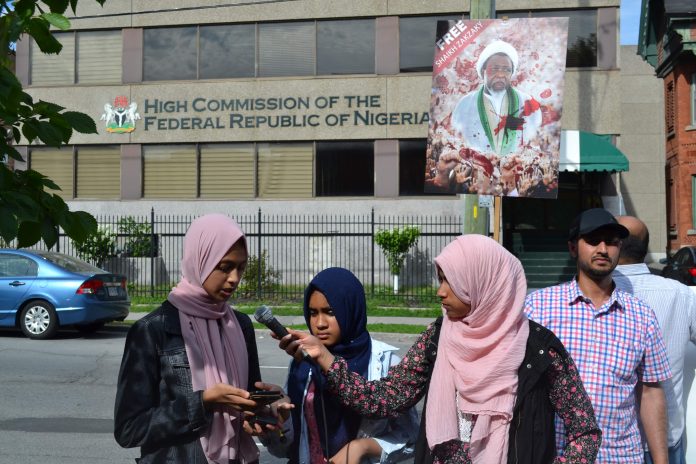 Hundreds of Canadians of all faiths and backgrounds battled the heatwave warning and gathered in the nation’s capital on July 19, demanding the immediate release of Sheikh Ibraheem El-Zakaky leader of the Islamic Movement in Nigeria (IMN) from the clutches of the Saudi backed Nigerian government after reports emerged of poisonous amounts of lead and cadmium was found in his blood.

The demonstrators gathered in front of the Saudi Arabian embassy and categorically condemned Saudi government for paying top dollar to Nigerian Government, military and the governor of Kaduna for eradicating Zakaky and his movement in Nigeria.

The procession proceeded to the Nigerian high commission as many onlookers witnessed the many peaceful men, woman and children as they marched through the streets of Downtown Ottawa, Canada.

The speakers repeatedly expressed grave concern about the well-being of Sheikh Ibrahim el-Zakzaky after reports emerged about his worsened health conditions.

The representative gathering of Canadian human rights organizations, mosques and civil society groups, also strongly condemned the brutal massacre of thousands of innocent Zakzaky followers by the Nigerian army in 2015.

Protesters urged Nigerian President Buhari and Army to focus its resources on fighting the Boko Haram terrorists (the Nigerian equivalent of ISIS) rather than turning its guns on unarmed peaceful citizens it is obliged to protect.

The son of Nigeria’s Muslim leader Sheikh Ibrahim al-Zakzaky warned about the deteriorating health of the 66-year-old cleric after visiting his father early in July, Mohammad, stressed that his fathers’ conditions have reached critical levels and the Nigerian officials are intent on murdering his father as they have taken no actions to provide treatment.

The UK-based Islamic Human Rights Commission (IHRC) has previously announced that the treatment they require can only be fully accessed outside Nigeria.

The demonstrators further urged justice-seeking people all over the world to support the just demand for the immediate and unconditional release of Shaykh Zakzaky, his wife and faithful followers.

Demo organized by and above copy from Canadians Against Injustice canadiansagainstinjustice@gmail.com