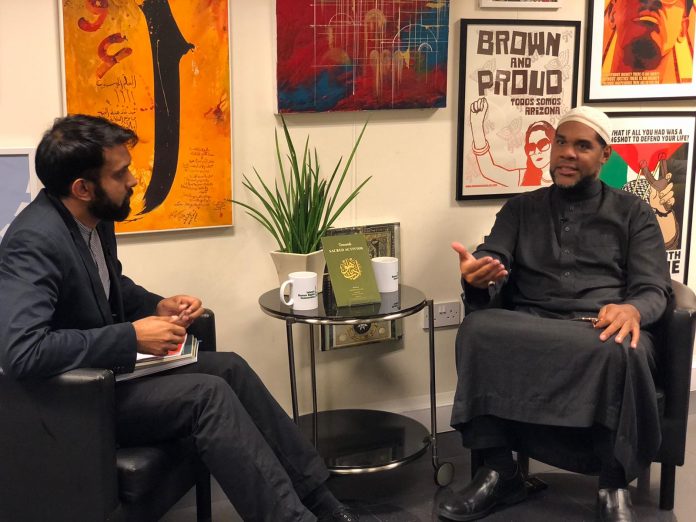 Abed Choudhury (Head of Legal and Advocacy at IHRC) chaired the author evening with Imam Dawud Walid on Friday, 1 November 2019.

The author evening began with Imam Dawud Walid introducing his book Towards Sacred Activism as an attempt to try to walk in the footsteps of our beloved Prophet Muhammad (peace and blessings be upon him). He said that although he believes that Towards Sacred Activism can give some general parameters about sacred activism in the West from an Islamic perspective, “the book is informed by the particular experience of a descendant of enslaved Africans who were brought to America and that he has lived in the United States of America for the majority of his life, so that’s what is informing the context behind the text.

Sacredness is bestowed and defined by the Divine Creator, so the Arabic word for sacred is related to haram like Masjid ul Haram, the Sacred mosque. Haram is also an area that means there are certain precincts and boundaries which within there are certain things that should be stayed away from and there is a certain heightened awareness and consciousness. The activism has to be within sacred parametres and boundaries – God is the One who sets these boundaries. Anyone who is involved in or supports that which is trying to bring about positive social change, when we talk about the issue of social justice we as Muslims cannot define truth based upon feelings. The whims of emotion or public opinion polls cannot be our primary standard of what justice or morality is. If we are operating from a sacred perspective, our morality should be subjected to public opinion polls because what is considered just today could be considered unjust tomorrow, and it may not be fundamentally just or unjust.

We have a hadith about what is our standard – how will you be when you see the good and the just as bad and unjust, and conversely, how will you be when you see injustice in public behaviour as something actually being good? Our Prophet Muhammad (peace and blessings be upon him) predicted the day would come when Muslims would actually do this; they will be totally confused about what is fundamentally justice and injustice. Our parameters have to be based on sacred criterion. These things are the Qur’an which is the unadulterated word of God that we believe has no doubt. The authentic sunnah, the teachings and practice of our beloved Prophet (peace and blessings be upon him) and we have ahadaith of this authentic sunnah that transcend the sectarian boundaries.

Also, the imja’ (consensus), that the scholars of this deen, there are certain aspects relating to halal and haram, and things that are laudable and recommended, and those things that our ulama, male and female, have agreed upon for 1400 years, are part of the deen, and these are also sacred. Anyone who is trying to go against this consensus that all of the Muslims on certain issues have agreed upon in the last 1400 years, it is not Islam, it is something else. Everything is not open to reinterpretation.”

Abed asked, “what is it that prompted you to write this book?”

Imam Dawud explained that he part of a fellowship of a major university in America with a number of American Muslim leaders and organisers and he saw beginning to take place “an effort of people from outside of the American Muslim community, trying to groom Muslim activists to take certain positions that are based purely in secularism that strips the sacred in how Muslims organise and view issues relating to social justice. I saw the Muslims ourselves taking on a lot of secular sensibilities and a framework coming from the so-called progressive left in the USA. Many of these people in the progressive left have islamophobia just as the right does as well but they use the American Muslim community as a type of a wedge group in their identity politics, but in reality they are hostile towards many mainstream islamic beliefs. This is what prompted me to write this book to re-centre Muslims in general in the West,  around what is important when we talk about justice activism and organising.

Abed mentioned the focus on the concept of enjoining of good and forbidding the evil which Imam Dawud describes as the starting point of Islamic activism, so Abed asked, “what is the islamic basis for activism for Muslims?”

Imam Dawud said, “all throughout the world, the foundation of a noble way of life is enjoining in good and justice and forbidding the evil and injustice  – this is very clear in the Qur’an and hadith that it is a community obligation that the Muslim community should be organised wherever it is at and to have a social critique based upon sacred parameters to look at what is going on in society. Those things that are going well in society, Muslims should be the foremost of those promoting good and justice in society. Likewise where there are people who strip others of their human dignity and human rights based upon what we value as truth, then we should be at the foremost placing barriers and trying to change those injustices.”

On justice, Imam Dawud Walid said justice is part of Islamic ethics. “God says He loves people of justice and our beloved Prophet (peace and blessings be upon him) is the foremost of living whatever God says He loves in human beings. If we want to come closer to the presence of the Almighty, we have to be a people of justice. Justice cannot be simply defined as feelings, there has to be a parameter based in truth so anything that God curses, attaches punishment or is angry at, we can’t take that as an issue that is what we would celebrate or promote as a justice issue. One of names of Allah is Al ‘Adl, He is the Most Just. More specifically, it is God who put everything in its proper place as He intended it to function. So when human beings work to restore the God-given rights that the Almighty gave for people and within those parameters, then that is justice. However when people deny God-given rights, this is taking things outside of its proper place and it is wrongdoing and oppression.”

Abed and Imam Dawud also discussed the relationship and responsibility among scholars and activists. Imam Dawud said, “scholars have to be in conversation with activists and vice versa. Activists have to take some guidance from the scholars and scholars have to understand the social and political environment of what’s going on not only in their country, but the policies of their country and how it is affecting other people across the world.”

Other topics discussed in great detail and various questions from the audience included the call-out culture among activists and how Muslims should go about doing this, issues around the LGBTQ community, Malcolm X, white supremacy, British politics and much more.

Purchase your copy of Towards Sacred Activism here.

Dawud Walid is currently the Executive Director of the Michigan chapter of the Council on American-Islamic Relations (CAIR-MI) and a Senior Fellow at Auburn Seminary based in New York.