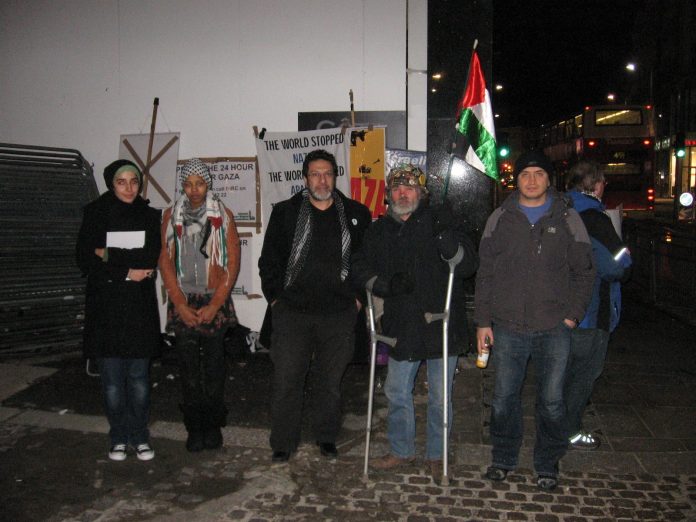 The 22 day war waged by Israeli forces against the Palestinians in Gaza at the end of 2008 and beginning of 2009 caused world-wide consternation and protest.

In London, IHRC organised a 24/7 vigil outside the Israeli Embassy in London, UK.

Below are some extracts from the blog that documented the event and photographs. We asked the vigil organiser for some thoughts ten years later on why he organised the event.  He responded thus:

“I simply wanted to show solidarity with the oppressed Palestinians. At the time, the scale of atrocities carried out against the Palestinians was so grave that many conscious people around the world were holding demonstrations in solidarity with Palestinians and against the Israeli oppression. It was a moment that the lines of justice and injustice were drawn clearly; and anybody who cared about these values took side with the Palestinians and show it any way possible. I thought it would be meaningful to manifest these feelings through having a constant vigil in front of the Israeli Embassy in London. To me and many others, it was the representative of all the bad things that have been happening to the Palestinians. Many people already had regular demonstrations there. So why not keep it a peaceful regular event so that the oppressors would know so long as they continue to oppress the Palestinians, there would be some people who would take it upon themselves to hold the Israelis accountable for their atrocities and demand justice for them.”  ~ Kara

This vigil was started on Friday 9th January 2009.  Amongst the many supporters of the vigil were FOSIS (the Federation of Students’ Islamic Societies) and IJAN (International Jewish Anti-Zionist Network).

We were privileged to have the late Brian Haw attend some evenings. People from around the country, including Scotland and Cornwall attended.

Read testimonies from the blog below the photos album.

I arrived just after 5pm, finding Br Mez in deep conversation with a pro-Palestine supporter and another sister busy listening to another activist. I looked around, a handful of protestors were gathered opposite the embassy, preparing for the daily demo that usually begun at 5.30. Amazing people- they’re outside here every evening, unrelenting, and in defiance of the police who have in the past few days told them to ‘stay away’! How dare they!

All in all, my evening went pretty well…kind strangers popped over to have a word or two; one lady, who looked like she just left work for the evening, walked past then came back and looked around at our posters. She came up close to us and said ‘My prayers are with Gaza and with you- I totally support what you are doing’ and then quickly dashed off. Her kind words stayed with me and the other sisters on my shift all night, and her sentiments were shared out loud by many who walked past. I would also like to thank all those who hooted as they drove past – and also all those who have signed up to join the vigil – may you all be rewarded for your prayers, concern and activism. Ameen ~ Taubah

A middle age man, whose origins I could not guess, approached me today and handed me £20 for IHRC. He apologised for not being able to attend the vigil.

A little after this, an elderly Caucasian women approach our vigil. She stopped by the candles and bowed her head. Initially I intended on approaching her, I changed my mind after realising she was deep in prayer. Seeing this women standing in the middle of Kensington High Street with her head down, eyes closed and deep in prayer touched me deeply, and gave me a renewed sense of hope. ~ Mez

Kara was awoken from the tent where the night team have been sleeping in shifts, by nearby screams and shouts. On joining his colleague on the pavement he was informed that a group of men associated in one way or another with the nearby branch of Starbucks (some 30 feet away) had been raging that “this lot had smashed up Starbucks so lets bomb and get these terrorists” by “terrorists” them pointing out the guys at the vigil.

The first part of the night was full, with IHRC’s chair, Massoud Shadjareh, veteran activist and journalist Victoria Brittain, a local authority councillor and four others holding fort until the all night team arrived.

As the days pass, more and more people are booking to attend, and everyone is welcome. With no sign of the atrocities waning – 60 raids on Gaza during the night according to the BBC – and with police becoming increasingly more violent at the other demonstrations, this vigil is gaining even more importance.

The night saw taxi drivers come up to the team and express support, as well as an inebriated Zionist who took the opportunity of being the sole other person at 3am on the street to launch into a pro-Israeli rant.

Still the messages and greetings, all forms of support for the vigil are growing. Last night they lit candles and the mood became even more sombre in remembrance of the 900+ dead and the thousands injured and maimed.

Just finished my first shift at the Vigil. Although in the past I have been critical and pessimistic about the benefits of such actions, I know now their importance.

In just four hours, hundreds of passers by were able to read our banners and slogans, “The World Stopped Nazism, The World Stopped Apartheid, The World Must Stop Zionism.” I could see on the faces of many passing by, the beginning of a thought process. It is the instigation of these very thoughts, getting people to think about the evils of Zionism, that makes such vigils so important.

In the first half an hour a few van drivers horned and gave me a thumbs up in support. I was particularly touched by one elderly lady who came over to me, gave me a long stare, and said “you are absolutely right.”

I had conversations with Africans, Arabs, Caucasians and others, all united by their humanity.

The cold has subsided.