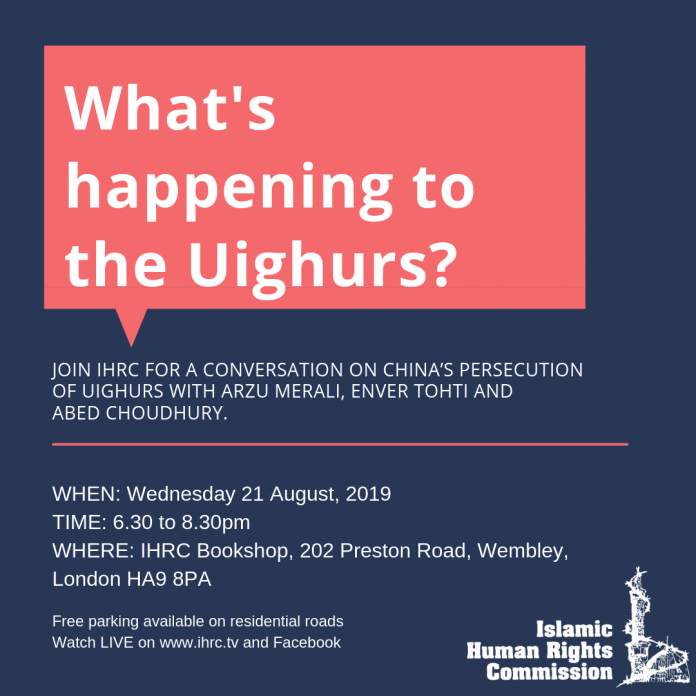 Massoud Shadjareh chaired an event with Enver Tohti Bughda, a former surgeon in China, and Abed Choudhury, Head of Advocacy at IHRC, on 19 August 2019, to discuss the long history of mistreatment and persecution of the Uighurs, the eradication of Uighur culture and heritage, religious persecution, mass transfers of populations in and out of Xinjiang and political suppression.

Tohti delivered a presentation on the history of East Turkistan and the people of East Turkistan. In every province in China, there is a state-run cancer. One such hospital established in 1994, contained 500 beds. In 2007, there were additional expansions to the hospital which included 2500 beds, in a province with a population of 25 million, which is evidence of dubious taking place, otherwise why would there be such high incidences of cancer. Exposing this disparity was one of the reasons Tohti had to leave China. In 1995, Tohti carried was ordered to remove the liver and kidneys from a Uighur Muslim prisoner, whom he was told was executed, however, during the procedure, Tohti saw that the man’s heart was still beating, and he realised the prisoner was deliberately left unconscious and not killed, in order for his organs to be removed.

When he was working at the hospital, parents of teenagers would ask Enver to check if their children were missing organs and if he thinks they had their stolen organs. In the early 1990s, had examined more than 100 children and 3 of them had scars on their bodies. Plus, ultrasounds confirmed that one of their kidneys were missing.

In 2017, Tohti showed images from three different airports, where there were clearly marked priority lane signs in Chinese, Arabic and English specifically for organ transportation.

Tohti shared a couple more images and videos showing the oppression of Uighur people and sharing anecdotes of people’s experiences.

Abed Choudhury discussed his recent travels to Istanbul with other IHRC staff members to interview Uighur Muslims to talk about what is happening in the Xinjiang region. One of the initial reports by IHRC about the oppression of Uighur Muslims was published in 2009 which found systematic abuse and discrimination against the Muslim community, from criminalising those who performed Hajj, forcing Uighur women to marry non-Uighur men, forcing movement of people to change demography and forcing Uighur men to drink alcohol in open, public spaces as a way of humiliating them. Choudhury described the situation for Uighurs as a police state, from the moment they step out of their homes, wherever they go, they are being followed by CCTV, being inspected by police officers and being required to give biometric information, such as fingerprints and eye scans on a consistent basis.

Choudhury was told by one parent that students are being interviewed by their teachers, whereby the teachers put the Arabic alphabet on the wall and asked if anyone knows what these are. A few children raised their hand and began reciting the Arabic alphabetical letters, which prompted the teachers to ask where they learnt this. The young children, aged 3 to 5, would innocently explain that their mother, father, or brother, etc. taught them. The following day, the family members were arrested.

Such tactics are used to create a climate of fear. One of the torture methods implemented was intended to prolong the people’s misery for as long as possible. The violence would be inflicted but the torturers would not let their victims die; there were also incidences of rape used to humiliate Uighur women. Many witnesses mentioned their families were taken to camps as soon as they left China for Turkey to seek refuge. Ultimately, what is happening is state-sponsored persecution of the Uighur Muslim community. The state has taken it upon themselves to control every aspect of the Uighur Muslim community’s lives with harsh and oppressive regimens to control them and to put people into camps to try to turn them into Chinese citizens and rid them of their Uighur heritage.