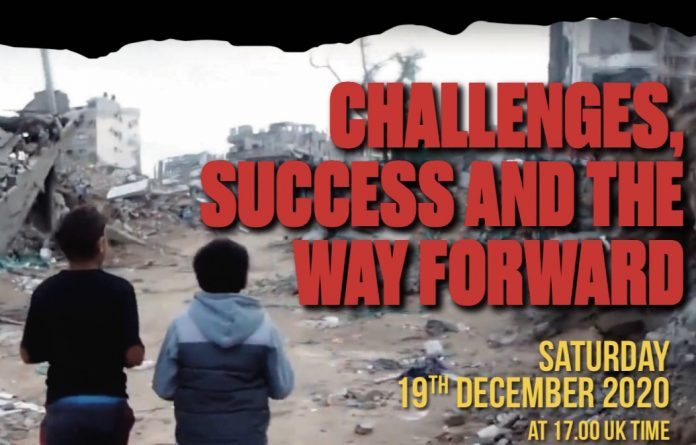 IHRC hosted an online webinar (with supporting organisations: Scottish PSC, Jewish Network for Palestine, BRICUP, AIM, Inminds Human Rights Group) on the Successes, Challenges and Way Forward of the campaign for Boycott, Divestment and Sanctions (BDS) against Israel. The event took place on Saturday 19th December 2020 and was available to view live on IHRC.tv, Facebook and YouTube. As of yet, the webinar has 163 views on YouTube and 151 views on Facebook.

Raza Kazim chaired the event and introduced the first speaker of the evening: Zwelivelile Mandela, the grandson of Nelson Mandela and a long-term activist advocating for the human rights of Palestinians – Zwelivelile is the Chairperson of the portfolio committee of agriculture, land reform and rural development; a member of Parliament in South Africa and Chief of the Mvezo Traditional Council. Raza asks Zwelivelile about the common comparison between what was seen in apartheid South Africa and what is seen today with the discrimination against Palestinians living under zionist rule as well as his views on current affairs with regards to BDS challenges, successes and the way forward.

Zwelivelile starts off by explaining how the birth of the BDS campaign in 2005 has been the most significant development in the struggle since the initial occupation in 1948, which is not to discount others, but because it provides the united front that had been missing for so long.  It has been successful in capturing not only the hearts and minds of the people but also the attention of authorities in occupied Palestine as well as the USA and Europe. The formation of BDS was as a result of six decades of struggle and six million Palestinians in exile; it is a response to apartheid Israel’s impunity and total disregard of international law and Palestinian rights.

Zwelivelile then goes on to explain how recent developments such as Trump’s term in office has caused an increase in the support shown to Israeli apartheid by western imperialism and colonialism. He uses the example of Morocco’s normalisation of ties with Israel in exchange for recognition of sovereignty over Western Sahara as a demonstration of Trump’s impacts on the campaign. On the opposing side, Zwelivelile uses the BLM movement in America as an example of a positive development that brought new life into the importance of social activism and standards of international accountability.

To close, Zwelivelile gives us hope on how the BDS campaign can expect to move forward. The three demands that BDS currently employs and must continue to stress upon in order to be successful are as follows:

It will also be imperative that the BDS campaign focuses on securing further grassroots support from the global trade union movement which may lead to support from younger people and students; here Zwelivelile uses the example of Mary Manning who took part in the Dunnes Stores strikes from 1984-87.

Overall, Zwelivelile stresses that although it may seem that the BDS movement has hit a hiatus due to the increasing normalisations of ties with Israel, it will in fact serve to fuel the support of the campaign.

Les starts off by examining previous successes of the BDS campaign including at the 2016 BBC Proms, where the broadcast was successfully cut short in response to the performing of the Israel philharmonic orchestra.  He also discusses his work and experiences with the academic boycotts targeting the complicity of British Universities in supporting Israeli funded companies and institutions.

When discussing the challenges the BDS campaign has faced, Les stresses on the importance of clarifying the reason for conflict before being able to address it; BDS to an extent has aimed to do this right from the start by stating the specific aim “to pressure Israel to comply with international law and to end international support for Israel’s regime of settler colonialism and apartheid”.

He goes on to explain how the Reut Institute report describes the BDS campaign and works against it, by recognising BDS as a threat the institute goes forward to shaping the counter BDS strategy. One of these strategies is what Les calls the “Don’t Mention Palestine” strategy which aims to blunt political education. Examples of how this counter strategy has manifested itself include, institutions such as universities or football clubs not giving clear justifications or reasoning behind divestment from Israeli complicit organisations for fear of antisemitism; which in turn disillusions youth activists.

To summarise, Les describes these issues as pertinent to the BDS campaign following a statement made by Matt Hancock 2016:

Raza then introduced the final speaker for the evening; Mick Napier, from the Scottish Solidarity campaign, has been on trial for five years for his activisms and work on the frontline.

Mick starts off his talk by strongly agreeing with Zwelivelile in that there are many observable parallels between what was South Africa’s apartheid regime and the way Israel is run today. The issue runs so deeply within British society that politicians such as Pretty lol Patel have had instances of meeting covertly with Israeli officials to discuss how humanitarian aid should be received directly by the army. As well as this, there are more risks starting to present themselves for activists who take an interest in the issue of Palestine such as the notorious Prevent Programme getting involved.

Mick offers a more hopeful outlook on the situation and argues that these more blatant attempts to shut down the BDS campaign are a natural response to the successes the movement has procured. So overall the extent to which the response aims to shut the campaign down is proportional and reflective to the threat the campaign poses. Ron Prosor, a former representative of Israel to the UN, describes Britain as a high-rise building; in the top floor everything’s wonderful, Israel has great relations with corporate and political elites – but every other level is imbued with toxic anti-Israel hatred. Should this hostility continue, Ron warns the UN it will damage state to state relations. It can therefore be said that it is at this level that the BDS campaign should be focussing its efforts on.

To close, Mick goes back to the example of the Dunnes Stores boycotts mentioned by Zwelivelile in the first speech and emphasises that it is most important that for the BDS campaign to keep the morale of the Palestinian people high, by continuing to show them that the world recognises their struggle and condemn Israel. He urges all people watching the webinar to get in touch with IHRC or the speakers to find out more how you can get involved.

For the final part of the webinar, Raza poses questions to the speakers sent in from the audience. The topics covered include the speakers’ opinions on why the BDS movement lacks structure and what can be done to build upon that front; how to overcome the feelings of the enemy being too well established and connected; the importance of discussing previous victories and closing remarks on ways to move forward.