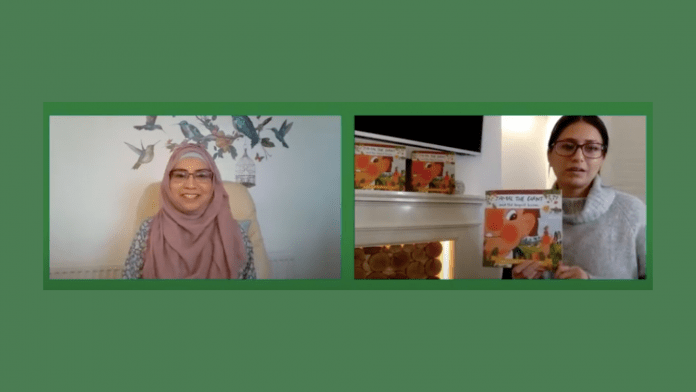 Warisa Hussain chaired the event with Mariam Hakim for the book launch of Jamal the Giant and the Largest Lesson on Monday, 15 March.

Mariam began with describing the stunning illustrations by artist Nezba Yousef and encouraged viewers to visit the Waw Stories website (wawstories.com) to find out more about the book, including the illustrations, background to the story, more about the characters and how to book was made.

Set in a forest in Bosnia, the book is about a naughty giant who has been disruptive to his neighbours and the villagers are fed up with his behaviour. The villagers create a plan to see if they can get Jamal the Giant to make some changes.

Warisa asked Mariam what inspired her to write the book. As a mum of two children, Mariam discussed how parenthood can be frustrating when dealing with tantrums and there was a part of Jamal the Giant which was inspired by her experience with her own son when he was a toddler. Like most toddlers, despite being so small, her son was at times quite bossy and held tantrums. As such, children’s characters can have such a large impact in the home. She wanted to find a way to talk to her children about their behaviour but instead of doing a story about an actual child, she blew it up into a giant so that when children read the story, they can understand the impact of any human or action.

Mariam also mentioned she told the story first, before turning it into a book. Followed by some further discussions with Warisa, such as how parents can utilise the book to manage children’s challenging behaviour during the lockdown, Mariam generously offered a reading of the book.

Common questions about the book:

What was the inspiration for this book?

“Jamal the Giant is actually based on my son, who (when he was a toddler) was like a little tyrant sometimes with his tantrums – as many toddlers are! As he grew older I wanted to teach him a way to understand the impact of his actions and how he should care for others around him and his environment. That’s where the idea of a young giant who was a bit naughty and needed to be taught a gentle lesson came from. I liked the idea of scale, and making Jamal a giant figure where everyone else can feel the impact of his actions. It’s a really creative way to explore good actions vs bad actions and the qur’anic quote is perfect for kids”.

Why is the book set in Bosnia and Eastern Europe?

“When I was growing up most giant stories that I had heard of were set in the UK or in Europe. So I had a picture of a very quaint little (mainly) Muslim village in my mind, that is set amongst a back drop of green hills, forests and lakes. This could’ve been anywhere in the world, but I decided upon Bosnia as it was the site of a major conflict and trauma. The book has themes of conflict, resolution and rebuilding so it seemed to fit well with how Bosnia is rebuilding itself as the book focuses on positivity in spite of bad things that have happened.

I’m very keen to show underrepresented cultures and communities and I don’t think there are many children’s books that feature this setting.  It helps to support the cause of Bosnia in some way as they rebuild.”

Why are there East Asian and Black African characters in this book set in Bosnia?

“I wanted to show off the diversity of the Muslim ‘world’ and Ummah and I also think representation is very important for young children. I never saw my heritage reflected when I was growing up in books so it’s something I’m conscious of. These characters especially are business owners, market traders and Muslims have a long history of migration based on trade. So the book has echoes of this heritage and it’s entirely possible these characters could exist in this wonderfully diverse and mixed village in Bosnia.”

Why are the villagers protesting in the book?

“Originally they were going to force Jamal out, and they had sticks in their hands, but I decided this may look too angry and violent. I wanted to promote a peaceful protest and show children about activism, how we can raise our voices first etc. Lucky for everyone in the book that Jamal was already going through a change at that point through the words of a tiny mouse who had stood up to him!”