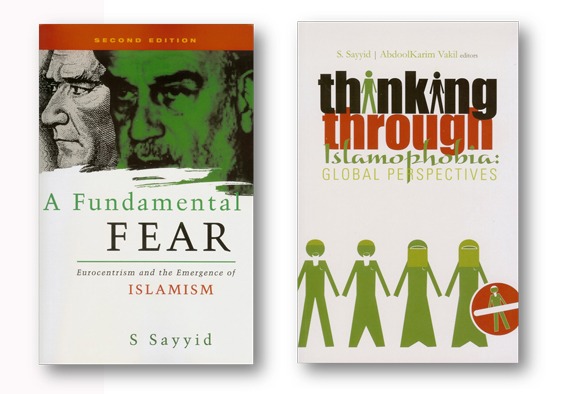 Sayyid discussed two of his most prominent books ‘A Fundamental Fear: Eurocentrism and the Emergence of Islamism’ and ‘Thinking Through Islamophobia: Global Perspectives’ (co-edited with AbdoolKarim Vakil).

Both books provided a unique perspective on Islamism in the West.  In ‘A Fundamental Fear’ Sayyid provided an interesting account of how Islam has taken form as a political identity in recent decades and the ways in which it has challenged the notion of European/Western supremacy.  He explained that “the de-centring of the West” is currently taking place and how the West has to recognise that it is only one amongst many other civilisations that deserve equal recognition.

Sayyid went on to discuss that Islam cannot be based or measured against what Western Christianity has become; as universal values do not necessarily have to mean Western values, they can still be universal without having to be originated from Europe and the Americas.  Salman Sayyid took this concept further by explaining that if people believe that there is only a ‘western’ model to have a good society this creates problems as it does not allow for other societies and or cultures to practice and progress adequately without facing opposition from the Western powers.  He provided the example of Islamism and how from the 1980s and Islamic revolution in Iran to the current Arab Spring has resulted in the phenomenon of major historical transformation and that Islamism will not disappear until key impotencies in society like that of the single  model state disappear.  However Professor Salman Sayyid was not too optimistic about this transformation as he expressed that the world currently does not cater for Muslim aspirations or opinions.

Sayyid then went on to discuss his recent book ‘Thinking Through Islamaphobia’ and the use of the of the term Islamophobia by taking it out of the focus on the West and giving it an independent identity in its struggle for justice.  He explained how the global north deny political agency to Muslims by banning Islamic values such as halal food, circumcision and niqab etc in its attempt to suppress the Muslim voice.

One question that came from the online audience that was watching the event live on IHRC.TV was ‘To what extent has the war on terror impacted the confidence of Muslims to express themselves as Muslims?’  Sayyid explained that Muslims have a tendency of apologia which he terms as ‘Islamese’ where Muslims are forever apologising for values of their religion and are constantly expressing that Islam is a religion of peace.  He states that Islam is Islam, it is neither a religion of war or peace, but it includes both concepts as it depends on your circumstances, for example if you are a Palestinian you would be interested in the message of resistance and if you are living a comfortable life you would associate with the messages of peace in the religion.

Salman Sayyid concluded the discussion by explaining the mainstream media’s contradictory behavior on their interpretation of the Arab Spring.  He expressed that he was perplexed about how the media and western governments were stating that the Arab Spring was driven by a secular crowd and the youth; however they used to wait for the Friday prayers, a holy Islamic day to see what is recited in the sermons about the political uprising.

Both books are available online at https://www.ihrc.org.uk/catalog/ and the video of the event will be online soon on the IHRC YouTube TV channel.