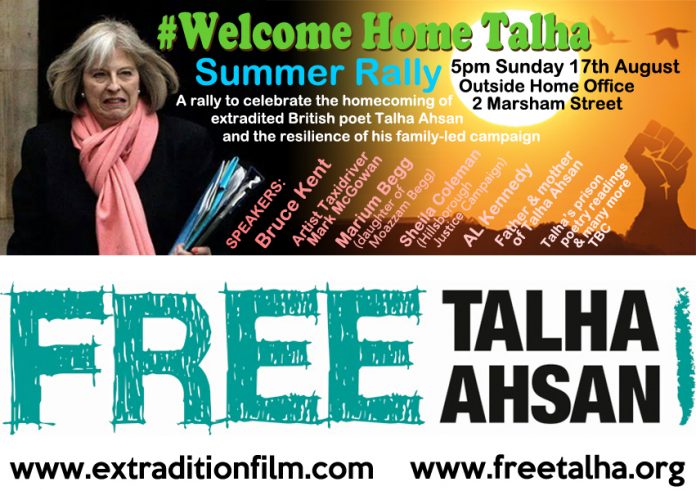 A rally to celebrate the homecoming of Talha Ahsan and the resilience of his family-led campaign and the ongoing struggle against unjust extradition laws.

“Wasn’t great to say goodbye?” boasted Theresa May in the cruel extradition of Talha Ahsan. Talha is a British-born citizen, who suffers from Aspergers syndrome like Gary Mckinnon, was extradited to indefinite solitary confinement in US Supermax prison housing death row inmate after over 6 years of detention without trial, charge or prima facie evidence in the UK.

Now it is time to say #WelcomeHomeTalha

Let all gather together to say “SHAME ON YOU, Theresa May”

US-UK EXTRADITION is ruining the lives of too many British citizens and guest – and must be reform urgently.

Event will be filmed for a future documentary currently commissioned as the sequel to Extradition film by Turab Shah www.extraditionfilm.com

Caroline Lucas MP says #WelcomeHomeTalha “I am so pleased for Talha, his friends and his family that they are, at long last, to be reunited. This case has highlighted the extent to which a British citizen’s fundamental rights can be breached if the US so decides. It highlights the grave flaws in UK law, such as on extradition and on detention without trial. And it highlights the amazing resilience of the human spirit, the determination to fight for justice and freedom. Talha has gone through a horrendous ordeal, including conditions in a US jail that equate to torture. I wish him the very best as he decides how best to rebuild his life, surrounded by those who love him dearly.”

Forwarded for information purposes only, for more information please refer to the original website freetalha.org