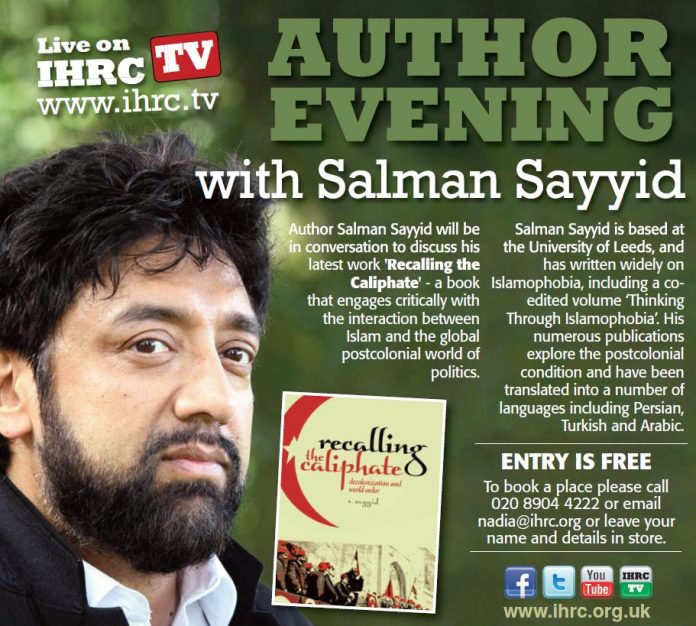 Join us for our latest Author Evening where Salman Sayyid will be in conversation to discuss his newly published book ‘Recalling the Caliphate.’

Recalling the Caliphate’ engages critically with the interaction between Islam and the global post-colonial world of politics. Sayyid focuses on how demands for Muslims autonomy are debated in terms such as democracy, secularism, liberalism and even cultural relativism. This allows him to both analyse how decolonization is continually deflected in the Muslim world and evaluate the possible ways in which decolonization can be accelerated within the Ummah.

Tweet your comments and questions to @IHRC – the event will be streamed LIVE around the world HERE.

Dr. Salman Sayyid – is currently based in the University of Leeds. From 2010 to 2013 he was inaugural Director of the Centre for Muslim and non-Muslim Understanding in Australia. His main intellectual interests lie in the areas of critical Muslim studies, decolonial political and social theory, and rhetoric. His numerous publications explore the postcolonial condition and have been translated into a number of languages including Persian, Turkish and Arabic. His first book A Fundamental Fear was upon publication nominated for British Sociological Association’s prize for the best first monograph, however, subsequently it was banned by the Malaysian government. His recent publications include a co-edited volume:Thinking Through Islamophobia and a co-authored book Racism, Governance, and Public Policy. He is a joint editor of the monograph series: Postcolonial Horizons/Decolonial Studies published by Pluto Press, he is founding editor of ReOrient: The Journal of Critical Muslim Studies. His new book Recalling the Caliphate was published in 2014.

You can download a PDF copy of the poster below