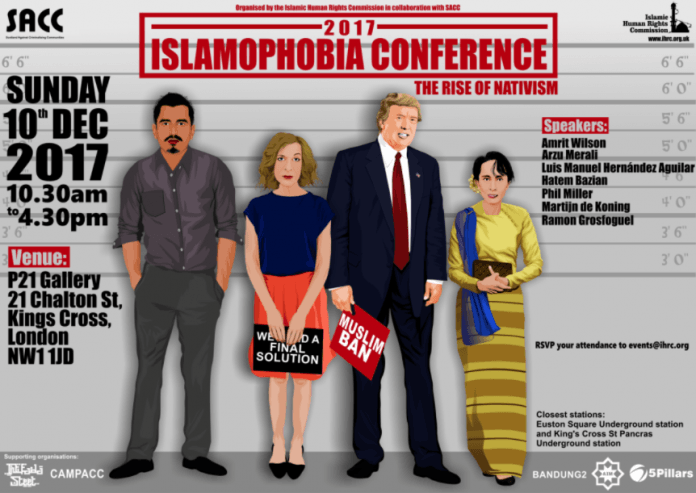 Last year’s Islamophobia conference discussed the creation of a police state in the UK. While the policies aimed at surveilling, criminalising and extraditing Muslims, refugees and migrants have continued unabated, we have seen alongside this the alarming growth of nativism in the UK and around the world.
Nativism is the political policy of promoting the interests of “native” inhabitants against those of “immigrants”. It is racism masquerading as patriotism.
This racism reared its ugly head during the Brexit debates. Anti-immigrant sentiments were fanned to ensure a victory for the leave camp. Since then, incidents of racism and Islamophobia have been on the rise. Following the vote, people were attacked on the streets and told they now had to leave the UK since the leave vote was successful. The ‘leave’ result has further legitimised the environment of hate we already exist in.
The election of Trump in America has allowed nativism to enter mainstream politics. He branded Mexicans as lazy and as rapists, Muslims as terrorists and imposed a ‘Muslim Ban’. His anti-immigration stance and his plan for a wall on the Mexican border has resonated with people who feel they have been marginalised and silenced by immigrants, foreigners, the ‘other’ who are destroying their way of life. Trump’s rise to power mirrors a rise in hate crimes against minorities. Black communities continue to struggle against systemic violence, as well as racism from their fellow citizens, while Trump publicly undermines any criticism voiced by black communities. Trump’s presidency has emboldened Nazis to openly march on the streets again, galvanised the so-called alt-right and fractured community relations across America.
Across Europe we see a similar trend; the rise of the far-right has been fuelled by nativist sentiments. Ideas of foreigners taking over, of destroying indigenous cultures and imposing their own alien way of life have been the main talking points for the likes of the Afd in Germany, Marine Le Pen in France and Geert Wilders in the Netherlands. Recent elections in Germany, Austria, France and the Czech Republic saw major electoral gains for far-right parties / candidates. Europe’s shift to the right signals a new era of nativist policies, and foreshadows a future of uncertainty and instability for minority communities.
WHERE: P21 Gallery, 21 Chalton St, Kings Cross, London NW1 1JD (nearest stations: Kings Cross St. Pancras / Euston / Euston Square)
WHEN: Sunday, 10 December from 10.30am – 4.30pm
Speakers:
Click here for speakers’ bios
Click here for the programme
RSVP your attendance to events@ihrc.org
For information on Scotland’s Islamophobia Conference please click here