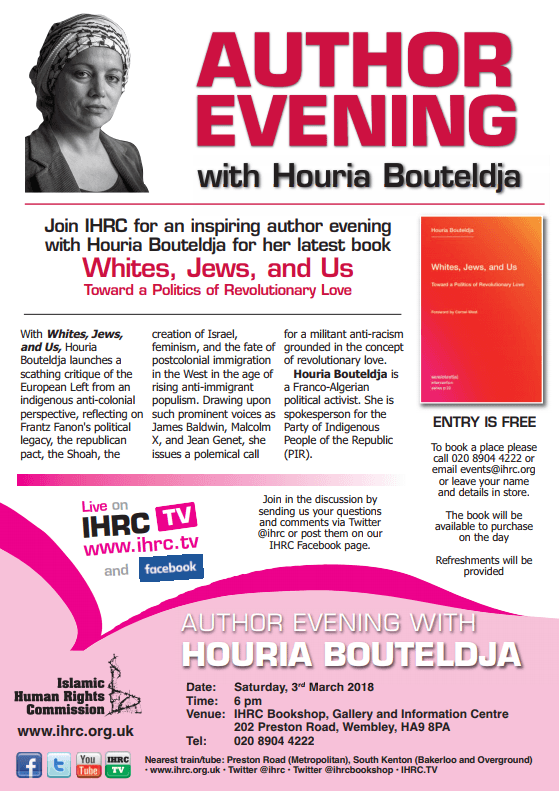 Join us for an exciting Author Evening with Houria Bouteldja – she’ll speak about her book, her work and more and as always, there will be an opportunity for great audience discussion.
About the book:
With Whites, Jews, and Us, Houria Bouteldja launches a scathing critique of the European Left from an indigenous anti-colonial perspective, reflecting on Frantz Fanon’s political legacy, the republican pact, the Shoah, the creation of Israel, feminism, and the fate of postcolonial immigration in the West in the age of rising anti-immigrant populism. Drawing upon such prominent voices as James Baldwin, Malcolm X, and Jean Genet, she issues a polemical call for a militant anti-racism grounded in the concept of revolutionary love.
WHEN: Saturday, 3 March from 6pm
WHERE: IHRC Bookshop, 202 Preston Road, Wembley HA9 8PA (nearest station: Preston Road / Metropolitan line)
About the author:
Houria Bouteldja is a Franco-Algerian political activist. She is spokesperson for the Party of Indigenous People of the Republic (PIR).
FREE EVENT
Refreshments will be provided
Watch LIVE at www.ihrc.tv and on the IHRC Facebook page
RSVP or request more info: events@ihrc.org