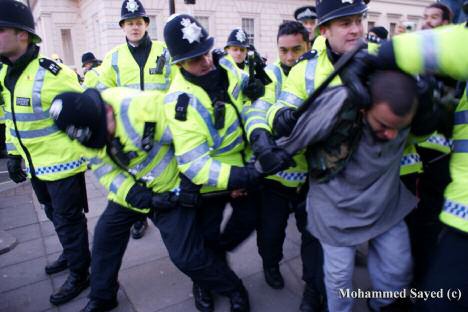 Many thousands of us came out to demonstrate against Israeli war crimes committed against the people of Gaza in January 2009. Motivated by images of violent death and destruction, and a desire to express solidarity with the people of Gaza, adults and children spontaneously gathered at the Israeli Embassy in London to demand justice.

Following these protests 119 young people were arrested. They were predominantly Muslim and aged between 16-19 years, the youngest was 12. So far 78 people have been charged with offences, the vast majority of these are public order offences which hold a maximum of 5 years imprisonment.

22 young people have already been sent to prison. Their sentences have ranged from 8 months to 2 years.

The next hearing is scheduled for the 26th March, at 9.30 at Isleworth Crown Court. It is important that as many people as possible come out to show that they support the young people and recognise the unfairness of these convictions and will not stand for it. Our present aim should be to campaign for reduced sentences, release of prisoners, and dropping of charges. This is the very least that these brave and conscious young people deserve.