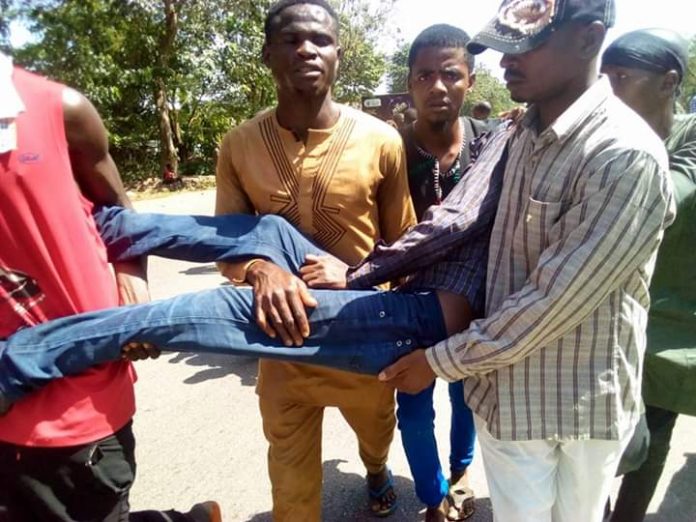 Armed forces are once again firing on an unarmed religious procession making its way to the centre of the Abuja a day after tens of people were killed in an attack on a similar procession in a suburb of the Nigerian capital.

Photographs show army personnel and vehicles blocking the path of marchers as they attempt to reach the city centre to hear speeches at the climax of annual processions marking 40 days after the anniversary of the death of the Prophet Muhammad’s grandson, Husayn, over 1300 years ago.

Organisers fear another bloodbath after a peaceful procession yesterday was attacked by soldiers in the suburb of Karu. At least 100 people are believed to have been killed and scores more injured after they were fired on with live rounds in a bid to stop them reaching the centre of Abuja.

Horrific pictures obtained by IHRC show the many victims being carried away by fellow marchers. Some are visibly lifeless and others injured and covered in blood. Some of the victims are reported to be bystanders. Some were mowed down by passing cars as they panicked to escape the attack. Most however were hit by bullets.

Eye-witnesses have told IHRC that the Nigerian army is using heavy weaponry against the marchers.

There is a shortage of medical supplies with victims not being able to afford the treatment they urgently need. Organisers have also appealed for doctors and surgeons to come and treat the injured.

Processions from all over Nigeria converge on Abuja every year climaxing in a huge rally in the centre of the city. Since 2015 they have been regularly targeted by Nigerian security forces but this year’s violence has reached a whole new order of magnitude as the authorities seem bent on preventing marchers from continuing to their destination.

Today’s procession again appears to have been attacked without warning and without provocation in what is a continuation of the Nigerian authorities’ crackdown on supporters of the Islamic Movement of Nigeria which organises the processions.