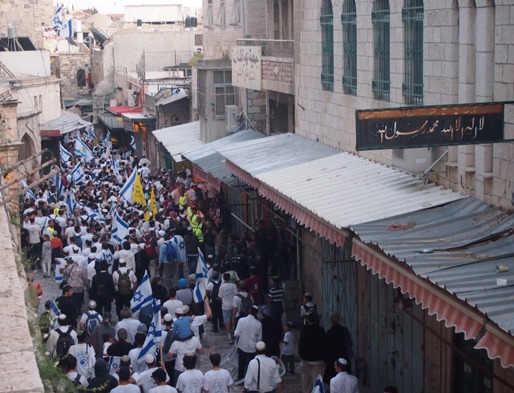 May 20 this year marked the forty-fourth “Yom Yerushlayim” (Jerusalem Day), one of the most highly venerated days in the Zionist calendar. Jerusalem day marks the “reunification” of Jerusalem after the 1967 Arab-Israeli war which up to that time had been under the control of the Hashemite Kingdom of Jordan, who annexed the territory after the 1948 war. For most Israelis it is a euphoric day, on which many take part in a rambunctious march around the Old City; for the Palestinian residents of the Arab Quarter however, it is a day of fear and intimidation.

Bolting down the cobbled streets in the late noon in  the Old City is something a young boy cannot normally do, this area of the city is usually packed with market goers, school children and tourists and even taking three steps forward is a chore. However on May 20 this year the streets are deserted, bar a few sizeable Hassidic families lumbering their numerous prams up from the wailing wall and a cluster of IDF soldiers at street intersections. As the young boy skips through the darkened alleys you can tell his rush is not that of a playful youth, but one of anxiety. The scampering of his feet is just one display of the fear that has festooned itself across the city on this day. The shops are bolted shut, the call to prayer is mute and the streets are ghostly quiet. As the boy scampers away down a darkened alley I hear what he is running from. A crowd of young men holding a familiar flag, chanting songs that aren’t so familiar. These men, numbering in the tens of thousands, represent to this boy an occupation he was born into, and a government which he will have no say in.

For the past forty years there has been a slow but steady encroachment of Israeli settlers into East Jerusalem. This Judaisation began in earnest after the 6 day war in 1967 with the Knesset illegally extending Israeli jurisdiction to the eastern part of the city in the Asharaf Quarter. According to PASSIA (http://www.passia.org/) 135 houses, 2 mosques, shops, pantries and the Abdeen Plastic factory were razed to the ground which left over 650 Arab citizens homeless. Walking through this neighbourhood the only plaque commemorating the destruction of buildings is that outside the rebuilt Beit Yacovv Synagogue which was blown up by Jordanian forces in 1948. Honouring certain atrocities that happened on her soil and whitewashing others is all part of the Israeli narrative and is brazenly visible around Jerusalem; the “Yom Yerushlayim” march is just one manifestation of this state policy.

Despite the erosion of their lineage to Jerusalem a courageous Palestinian community stands tall in the face of planning restrictions, racial discrimination in the workplace, restricted movement, police harassment and settler encroachment into their homes. As the latter march past me I’m reminded of the BNP marches through my home town Leicester; flags, young men with pent up testosterone, hatred, and the most important ingredient: a distorted view of their own history. The songs which the Israelis euphorically singing are about the city of David and how it should eternally be the home of the Jews. The term “City of David” is actually a rather recent phenomenon, even within the recent phenomenon of political Zionism itself. The term was originally coined by French archaeologist Weill in 1920 and adopted by Israelis in the 1960s, according to Pullman and Gwiazda of the Jerusalem Quarterly. There are so many painful ironies that come with this march, such as the carving of Stars of David on Palestinian shops, screams of death to the Arabs. However, amidst all this there are touching signs of resistance. Behind a fence and four sluggish looking IDF guards I noticed three Palestinian boys and their father, as the entranced Israelis waltz by the Palestinian boys jovially and sardonically mock the procession, ushering them through. The IDF soldiers beckon them away as a band of Settlers attempt to throw bottles at them but they remain, smiling and imitating the settlers who at this junction, number in the hundreds. As a group of settlers march past and glare forebodingly at me and my camera and I decided to leave; I’m not as brave as the Palestinian children. The march ended with ten Palestinian arrests and five Israeli arrests.

This is the first edition of “Al-Quds under Threat”, a series of articles written for the Islamic Human Rights Commission, dedicated to documenting the human consequences of the illegal Judaisation of East Jerusalem by the State of Israel. It is dedicated to the Palestinian people, in Jerusalem, the West Bank, Gaza and in the refugee communities spanning to Chile and beyond; never give up hope. You will return.