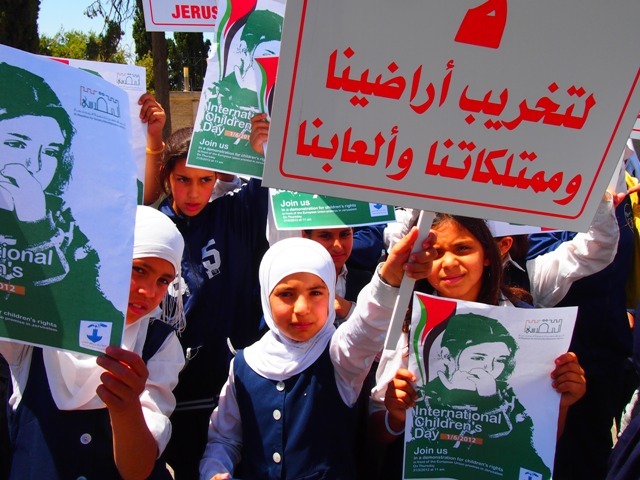 Friday June 1, marked International Children’s day, a day that is observed around the world and is used to draw attention to the plight some of the most disadvantaged, impoverished and oppressed young people on the planet. In East Jerusalem, children face a plethora of human rights abuses from the Israeli occupation forces which are engineered in order to eventually Judaize the whole city. Since the annexation of the West Bank in 1967 these policies have become more entrenched in Israeli law and manifest themselves in variety of areas of Palestinian life: from the labour market, to housing, to social services to education. All of these realms interlock intimately with the Palestinian child’s life, who for the Zionist enterprise, represent the future threat to a complete and united Jewish “Yerushlaim”.

Since The Second Intifada, it would appear that Israel is engaged in a war with the Children of Palestine, recent figures released by the Palestinian Ministry of information shows that 1,456 Palestinian children have been shot dead by Israelis since the al-Aqsa uprising in late 2000. To the Israeli occupation forces, many of these won’t have been classed as children, with the state classifying Palestinian children as under the age of 12 years old. In this “war” it appears that the children of East Jerusalem constitute the front line; of the 1,000 Palestinian children arrested in 2010, 500 were from the occupied city.

Upon the sight of a grassy knoll, the boys sprint free from the orderly lines their teachers have organised them into and throw themselves down the green slope. Open spaces like this are almost non-existent in East Jerusalem due to planning restrictions. If a young boy wants to play football on an open field o he has to travel to West Jerusalem, where the city’s municipalities have generously bestowed countless green spaces upon the Jewish wards. As one of the teachers storms after the rebellious boys, who have shown little regard to their uniforms or limbs, the girls cluster into small groups and cackle away. After a period of time dedicated to herding the children and sitting them down, they are informed why they have taken a bus to this area of Jerusalem and what they will be doing. Moaz from Al Maqdese the Society for Development explains that his organisation, a non-profit NGO that works for the human and civil rights of Palestinians in Jerusalem  have organised for the children to demonstrate outside the EU consulate. The demonstration aims to call on the EU to apply pressure upon the Israeli forces to fulfil its duties to the Palestinian children of East Jerusalem.

“We are here to protest the forced evictions and housing demolitions in Al-Quds” said Moaz to the children, “my house was demolished last week” said one girl whose hair was bound into the tightest of pony tails. The only thing that was more shocking than the content of her statement was the candid nature in which she delivered it, as if it were an inescapable fact of a little girl’s life that her house should be bulldozed down. In 2012 thus far there have been 22 Palestinian structures demolished in the East Jerusalem area, according to UNWRA statistics. The following reasons are often given by the municipality for housing demolitions:

All of the above are bound in legalistic language which is often undecipherable for Palestinian families who rely on a legal aid system which is hopelessly underfunded.

The detention of children has proliferated in recent years with most cases of detention taking places in areas that are subject to gross misconduct by settler organisations or Israeli security forces, such as Silwan, which has seen a burgeoning presence of Israeli settlers in recent years. However this is not confined to Silwan as Sheikh Jarrah and Al-Eisawiyeh have similar experiences. Already this year there have been over 126 children detained. Once arrested, the status of the children is like that of their adult counterpart and they are often subject to physical and psychological abuse which can result in post-traumatic stress syndrome. The cases of post-traumatic stress were so common during the First Intifada that the East Jerusalem YMCA established a rehabilitation programme dedicated to psycho-social support, empowerment and rehabilitation. A report released by the East Jerusalem YMCA details that 98% of children were subject to physical or psychological violence during their arrest and that 90% suffered nightmares, bed-wetting, anxiety and other forms of trauma upon release. 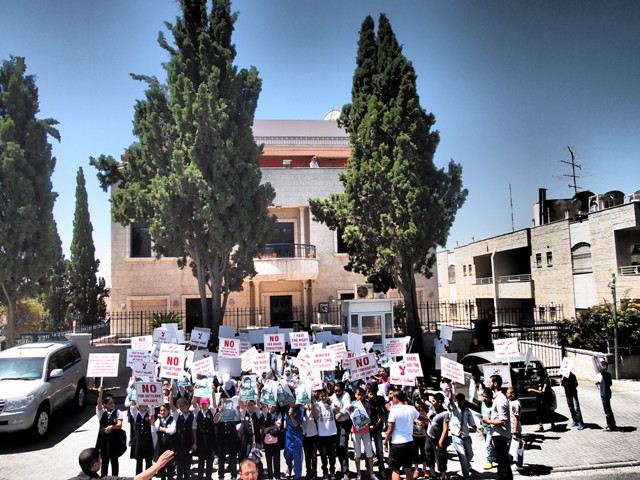 Despite the harassment of the police the children show their defiant character. As a police car sauntered past the demonstration, with the well-armed officers gazing out ominously the children began to jeer and mock. A delegation of them was invited into the EU consulate’s building to meet with some of its members and deliver to them their demands. Momentarily they emerged with EU t-shirts and footballs and a promise from the EU to highlight their cause and fight for them. A victory? Or a microcosmic metaphor for the “Peace Process”? It matters little in the grand scheme of things as the pleas of the children of Jerusalem have been ignored repeatedly since 1967. As the young boys sprint back to grassy knoll, ball in hand, I am remembered how young they actually are, and that even something as sacred as childhood is under attack by the occupation.

This is the second edition of “Al-Quds under Threat”, a series of articles written for the Islamic Human Rights Commission, dedicated to documenting the human consequences of the illegal Judaisation of East Jerusalem by the State of Israel. It is dedicated to the Palestinian people, in Jerusalem, the West Bank, Gaza and in the refugee communities spanning to Chile and beyond; never give up hope. You will return. By “Al-Kuds”.