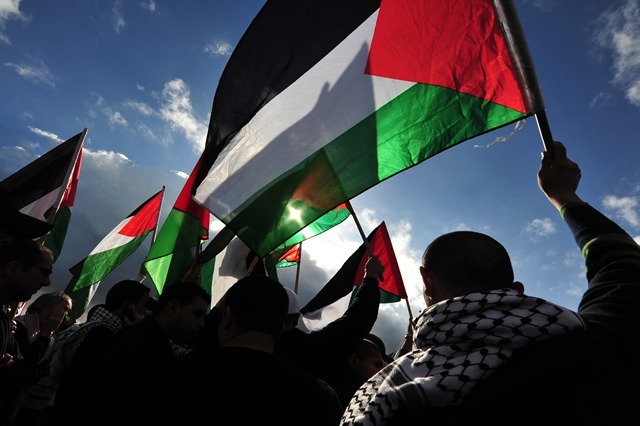 Nature of apartheid which creates crisis and unless that is addressed it will continue.

To stand up for the Palestinians, raise the flag!

IHRC is calling on supporters of justice everywhere to stand up for the Palestinians by way of flying Palestinian flags. In such a moment of need for international support, the campaign would show solidarity and raise awareness of the dire needs of the Palestinians for justice and peace. IHRC also urges Muslim leaders to adopt sensible and workable policies to ease the suffering of the Palestinians.

The recent Israeli aggression against the Palestinians in al-Aqsa Mosque and plans for the eviction of Palestinians from Sheikh Jarrah neighbourhood to give their homes to Jewish settlers are the manifestation of 70-year of military occupation and aggressive dispossessions of Palestinians. The most recent Israeli aggression has sparked yet another bloody conflict. Palestinians are massively outnumbered, outgunned and abandoned by Muslim countries, and their political elites whose primary concern has been to not upset Israel and its main supporter, the US. Whenever Israeli aggression escalates, Muslim leaders worldwide play the game of condemnation of the Israeli atrocities. Yet, as soon as the situation calms down, they get in line to establish warm mutual relations with Israel. The fact that Israeli aggression continues unabated is prime evidence of the untenability of such hypocritic policies.

The de facto occupation of the West Bank forced the displacement of Palestinians from Jerusalem, and the effective siege of the Gaza Strip, including regular aerial bombings, continue. At the same time, most of the world turns a blind eye to abuses and atrocities. And as the Coronavirus rips through countries everywhere, nowhere is the disease being more keenly felt than in Gaza, where millions of people live cheek by jowl in one of the most crowded places on earth.

While Israel has managed to vaccinate 60% of its population, with 54% fully vaccinated with both doses amounting to over 10 million vaccinations, it has restricted the supply of vaccines to the Palestinian West Bank and Gaza Strip. In March, UNICEF announced the arrival of 37,440 doses of the Pfizer vaccine and 24,000 doses of the AstraZeneca vaccine to Palestine as part of the COVAX programme. Previously, Israel had agreed to donate just 5000 doses to Palestine.

Our Fly the Flag campaign calls on supporters of justice everywhere to stand up for the oppressed and oppose the oppressor. We urge people to fly Palestinian flags wherever they can. In such a moment of need for international support, the campaign would show solidarity and raise awareness of the dire needs of the Palestinians for justice and peace.

Dear [the name of the leader],

The former United Nations special rapporteur on human rights in the occupied Palestinian territories, Professor Richard Falk, stated that Israel is an apartheid state. As such, violence, subjugation and displacement of Palestinian is necessary in order to maintain its Israeli control over the Palestinians. This is the reason why we see this never-ending cycle of violence – an oppressive apartheid regime can only be maintained through brute force.

Every time violence flares up, we see world leaders condemn Israeli atrocities, as though these are isolated incidents. Yet, as soon as the situation calms down, they get in line to establish warm mutual relations with Israel. The 70-year history of Israeli aggression towards Palestinians shows us that it is not enough to just condemn violence only when it occurs. This is an ongoing crime, and the world must take action to end this continuing injustice. Over 70 years of condemnations without sanctions has only emboldened Israel to the point that it can almost uniquely flout international laws and carry out the worst atrocities with absolute impunity.

The world is tired of insincere platitudes from politicians drawing a moral equivalence between the victim and the aggressor and asking both sides to sort out their differences. As the continued oppression of Palestinians shows us, Israel, like Apartheid in South Africa, is not something that can be negotiated with nor can it be reformed. Racism, dispossession and violence against the other are just as inherent to apartheid Israel as they were to apartheid South Africa and likewise it must be dismantled.

I urge you to take a stand against the apartheid regime of Israel. So long as those in power remain silent about apartheid in Israel, Palestinians will continue to be oppressed.