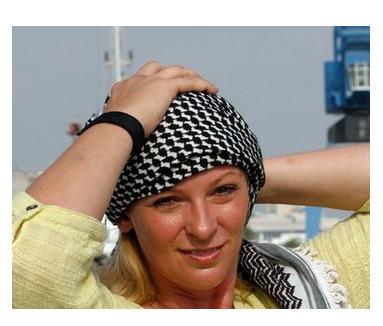 Congratulations on your political memoir becoming an instant bestseller. I’m in Iran and have the only copy in the country. I can tell you, its so fiercely fought over, it’s worth its weight in WMDs. Note to Random House: have ‘A Journey’ translated into Farsi and Arabic asap, it’ll fly off the shelves in this part of the world.

Tony, yesterday I went the Al Quds day protest in Tehran. You may have heard of it? It’s the rally where Iranians gather to protest against Israel’s illegal occupation of Palestine, including the Holy city of Jerusalem.

I’m being sarcastic by asking if you’ve heard of Al Quds day, because I know you have. It is your very worst nightmare right? After all Tehran is the place where politics and Islam intertwine.

Personally I’ve never understood this fear of ‘political Islam’ it seems to me that religious people should always be educated on world events rather than kept in ignorance. Like say, Mid West Christian Zionists in the US The kind of folk who can’t find their home city on a map of their state but re certain they hate Islam even if their not sure whether its a type of curry or a foreign make of veh-ic-ule.

Anyway, yesterday, I stood in the midst of more than one million Iranian Muslims all chanting in unison ‘Marg Bar Isre-hell!’ and ‘Marg Bar Am-ri-ca!’ You know what that means Tony I’m sure ; ‘Down with Israel, down with America’. The men, women and children around me withstood a day of no water and no food (it’s called Ramadan, Tony, it’s a fast). Coping with hunger and thirst in the hundred degrees heat, as if it were nothing. They can withstand deprivation in the Muslim world. Here in Iran they feel proud to suffer in order to express solidarity with the people of Palestine. It’s kind of like the way you express solidarity with America only without illegal chemical weapons and a million civilian deaths.

Some mothers at the rally wept, not out of hatred for ‘the West’ but out of empathy for the mothers of Rafah, Khan Younis, Nablus and Jenin. Do you recognise these place names Tony, as Middle East peace envoy you really should. Israel has massacred children in all of these cities in recent years. Didn’t you know?

Today when the streets of London reverberate with cries of ‘Allahuakbar!’ and ‘Down Down Israel.’ Christians and Jews will join the thunderous cries of ‘Down Down Israel, marching shoulder to shoulder with the ‘political’ Muslims you say you fear so much.

Perhaps you believe that I am in danger in Iran, especially on a day like Al Quds. Well here again Tony, you’ve been fed and have consumed in its entirety, a massive lie. The lie that says when Muslims express an opinion in groups, in public, it is always spurred on by hatred of ‘us’ infidels. As if all protests that are led by Muslim communities are a kind of long held grudge against the Crusades.

Perhaps they should be more, not less angry here than they are Tony. Because having read the postscript to your bestseller its clear you are on a modern Crusade.

The ‘conflict’ between Palestine and Israel is according to you all about religion and has nothing at all to do with the ethnic cleansing of the Arab population, nor the degradation of those who remain beneath the boots of their Israeli occupiers. You say that Arabs have and always will see ‘Jews’ as enemies. For God’s sake Tony do your history. And if you’re going to run a ‘Faith Foundation’ then better gen up on Islam 101 don’t you think? Did your pals in Tel Aviv forget to tell you how many thousands of Jews lived in Historic Palestine in harmony with their Arab neighbours before 1948? Do you really not know that even today tens of thousand of Jews reside contentedly in Iran?

I’ve sat with Muslim families, those whose children have been burned by Israeli/US phosphorous bombs. Those who are still suffering hunger due to the Israel siege of Gaza. Those who have lived through the early days of sanctions against Iran when they needed food vouchers just to live. And every single Muslim in these suffering families has the same message ; ‘We don’t hate anyone for their race or their religion. We cannot hate Jews they are in our holy book it is against the teachings of the Koran.’ But Tony let me ask you this. Why should any people, Muslim or otherwise, be expected to put up with this kind of constant threats from you and your bosses in Tel Aviv and Washington? Do you have any understanding of what it is like to live in Gaza? Under siege, attacked with chemical weapons, your children’s schools razed to the ground by Israeli missiles, your hospitals shelled, your electricity limited, your water undrinkable?

Actually Tony I think you are a sympathetic person. I actually think that you do feel twinges of pain at the hardships suffered by millions in the Middle East as a direct result of your support for Israel. Then you put that feeling to one side, because on a fundamental level – you think ‘they’ deserve it don’t you?

In your book you say you knew full well how many Beirut homes were flattened, how many civilians died in Lebanon in 2006. Yet you dismiss Lebanese rage about Israeli occupation of ‘Shebas Farm’ as being an irrelevance, about a ‘tiny’ amount of land. You cannot see it as part of the constant pressure on Lebanese society as a whole by their heavily armed aggressive Israeli neighbour. You see it as: ‘Israel is attacked. Israel strikes back.’ As if Israel lives in placid peace, being kindly to all around it in between these massacres.

As other world leaders came out to demand Israel immediately cease its 2006 bombing raids on Lebanese cities, you stayed silent.

‘If I had condemned Israel’ you say in your book ‘I would have been more than dishonest. It would have undermined my world view.’

Your world view is that Muslims, are mad, bad, dangerous to know. A contagion to be contained. Your final chapter is a must read here in the Middle East Tony, congratulations! For it lays out the ‘them’ and ‘us’ agenda of your friends in Washington and Tel Aviv.

In the final chapter you say; ‘we need a religious counter attack’ against Islam. And by ‘Islam’ you mean the Al Quds rallies, the Palestinian intifada (based on an anti Apartheid struggle Tony, NOT religious bigotry), against every Arab who fails to put their arms in the air as the F16 missiles rain on their homes and refugee camps and sing a rousing chorus of ‘Imagine all the people…’

When you say ‘extremism’ must be ‘controlled and beaten’ you mean that you and your kind of morally bankrupt (but filthy rich) world leader wants control over the rising solidarity spreading through the Ummah and being joined by activist of all creeds on the streets of Paris, London, Bradford, Rome.

‘Not only extremism must be defeated’ you have written but ‘the narrative’ ‘has to be assailed.’

They are highly aware of the history of this region, the wrongs perpetrated by Israel against Palestine and the political machinations of the US and the UK governments to isolate them.. All thing considered and nice as the people have been during my stay. I wouldn’t recommend coming over on a book tour though…