Anti-Zionism is Not Anti-Semitism 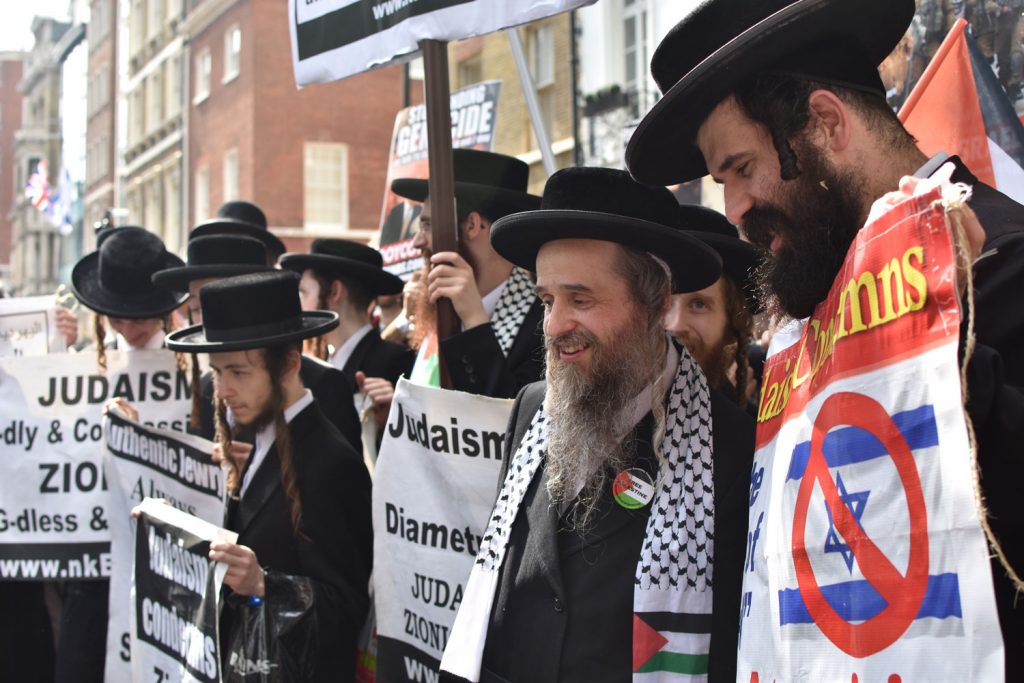 At the heart of the recent furore surrounding the Labour Party’s adoption of a controversial definition of anti-Semitism is the relationship of Zionism to Jewry and Judaism. The International Holocaust Remembrance Alliance’s definition with its eleven non-exhaustive examples has been foisted upon countries and institutions in what is a cynical political campaign to render off-limits any criticism of Israel and its founding philosophy.

The aim of those who wish to equate anti-Zionism with anti-Semitism is simply to curtail opposition of any kind to Israel and its policies. Although the distinction between the two is self-evident and well documented the friends of Israel would like us all to sign up to a collective act of intellectual self-censorship so that the uncomfortable facts remain unspoken and, by extension, unchallenged.

Those in the Labour Party who opposed adopting the full definition, including leader Jeremy Corbyn, took issue with four examples in particular arguing that they would restrict the party’s ability to criticise Israeli human rights abuses and atrocities:

• Accusing Jewish people of being more loyal to Israel than their home country;

• Claiming that Israel’s existence as a state is a racist endeavour;

• Requiring higher standards of behaviour from Israel than other nations;

• Comparing contemporary Israeli policies to those of the Nazis.

The second example is perhaps the one that irks Israel and its allies the most since it strikes at the heart of the Zionist enterprise. As the foundational ideology of the state of Israel, any criticism of Zionism as racism is an attack on the existential claims of the state itself. Yet this and other claims to statehood remain contested by politicians, academics, religious leaders and activists alike. Some of the staunchest critics hail from the Jewish community itself, making the attempt to give Zionism some form of special protection tendentious at best.

Among these is Rabbi Ahron Cohen who represents a strain of orthodox Jewish thought that trenchantly opposes Zionism as a religious heresy. Crucially its proponents differentiate between Zionism and anti-Semitism viewing the first as a political ideology and the latter as an “illogical bigotry”.

In his essay “Anti-Zionism is not anti-Semitism” Rabbi Cohen describes Zionism and Judaism as “mutually exclusive”. While Judaism is a divinely revealed way of life showing people how to live a moral, ethical and religious life in the service of the Almighty, Zionism by contrast, with its origins in the nationalism of post-Enlightenment Europe, is the brainchild of secularised Jews who had, for the most part, cast off any attachment to their faith.

Zionism adopted that part of Judaism which was useful for its political ends, namely the idea that the Jewish people were promised a homeland by God. It rejected the hitherto conventional Jewish idea that God himself had thrown the Jews into exile as a result of their failure to uphold their religion. The regular anti-Jewish pogroms that broke out in Europe during the 19th century persuaded Zionists that Jewish exile was a consequence of the Jews’ own weakness and that they needed a nation-state, preferably in Palestine, to reverse centuries of subservience.

For Rabbi Cohen not only is the idea of a self-ended exile problematic but also the way Zionists went about this through the dispossession, subjugation and oppression of Palestine’s inhabitants. This was hardly accidental but an integral part of Zionism and its creation of Israel. In 1895, Theodor Herzl, the founder of the World Zionist Organization, wrote that the physical removal of Arabs from Palestine is part of the Zionist plan to “spirit the penniless population across the frontier by denying it employment … Both the process of expropriation and the removal of the poor must be carried out discreetly and circumspectly.” (Herzl’s Complete Diaries, June 12, 1895 entry)

In 1919 Dr. Chaim Weizmann who would go on to become the first president of Israel was reported by British Foreign Minister Lord Curzon to want “a Jewish State, a Jewish nation, a subordinate population of Arabs etc. ruled by Jews; the Jews in possession of the fat of the land, and directing the administration.” (D. Ingrams, Palestine Papers, 1917-1922, p. 58.)

The process of establishing Zionist superiority and supremacy has been reinforced over the years by statutes such as the 1950 Law of Return which guarantees every Jew anywhere in the world the right to be a citizen of Israel (while those Palestinians who were forcibly expelled by Zionist aggression are denied the right to return to their ancestral land) and most recently the Nationality Law 2018 which reinforces and perpetuates the subordinate status of non-Jews in Israel.

Rabbi Cohen goes further saying that the wrongs of Zionism are themselves a cause of anti-Zionism overflowing into old fashioned anti-Semitism. Somewhat paradoxically Zionism and anti-Semitism have a symbiotic relationship with Zionism actually feeding on anti-Semitism by using it as a means to attract more Jewish immigrants to its state. Rabbi Cohen’s conclusion is that the Zionist State has no right to exist from either a Judaic or ethical standpoint. The absurdity is that under the IHRA definition this view, expressed by an orthodox Jewish rabbi, would be anti-Semitic.