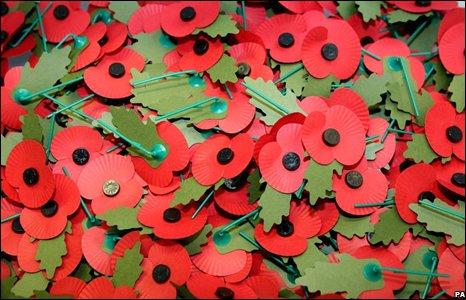 Much excellent writing has been published in this year critiquing the current Remembrance Day culture or giving reasons why not to wear a poppy.  Joe Glenton, a former Afghanistan veteran jailed for his refusal to serve a second tour, wrote powerfully about the failure of Remembrance today to reflect the brutal reality of war, instead proffering jingoistic platitudes that mask not honour the soldier.  Assed Baig and Roshan Salih offered critiques from a Muslim perspective.  Baig spoke of his own family who had fought in the Great War for Britain and how he too feels that the poppy symbolises an encouragement to more wars without just cause.  Salih gives his view as an erstwhile war reporter,  who has witnessed countless deaths at the hands of those who are now venerated by the poppy campaign. He also refers to others with similar views from the Catholic and nationalist communities in the North of Ireland, who see the poppy as emblematic of those who brutally oppressed them.

Most powerfully and poignantly of all was Harry Leslie Smith, the 91 year old veteran of the Second World War, who wrote how this year would be the last time he would wear a poppy, because remembrance has been twisted by those in power to justify unjustifiable conflicts in the present age, not least the debacles in Afghanistan and Iraq by NATO powers, including and especially the UK.

With such good writing, I didn’t think there was a need to write anything myself, despite my views on this being strong, despite what seemed to be a the relentless ‘poppy’ test being foisted upon Muslims by government AND other Muslims, to prove their loyalty to the nation.  Then I read a piece on Remembrance Day and Ashura.  I won’t name the writer, as she originally posted it as a Facebook post which was then widely circulated by enthusiastic friends.  I do hope she reads this, as it is not a response to her piece but prompted by it.  She or anyone else who wants to agree or disagree with me can contact me via this blog or tweet me.  I will recount my journey as a British born, and like the author of the anonymous piece,  also of Indian heritage Muslim, who also commemorates Ashura as the day of the martyrdom of Hadrat Hussain a.s., who has also written about Ashura and a type of modern day remembrance, and who cannot agree that:

“This year when these 2 dates [Remembrance Day and Ashura] fall within days of each other I see the similarities. How closely related the values are of those we honour; how their messages are somehow intertwined.”

This – against type from me – is not a decolonial tract.  This is my past and my present, and how the values of the mainstream that I grew up with and which I could relate to have been manipulated and eradicated in a way I could never have imagined.

Are they now forgotten?

I thought the upcoming 100th anniversary of the Great War would be remembered the way it was taught to me and so many of my generation, not offered up for generations to come as the exact opposite.  A chance remark by Joe Glenton to me after I interviewed him for an IHRC TV event last summer about the efforts by David Cameron et al to remake the idea of First World War into a war with just cause, fought for rights, led by commanders and government inspired to do good, made me me reflect on my youth and the inculcation of values from an early age through school and university culture about what was being remembered.

Early summer of Year 9 – 1985 – was a landmark for me.  The whole year in History we had learned about the interwar period (circa 1918 – 1939 CE), the rise of fascism, the consolidation of the Soviet Union, appeasement, the fall of the Weimar Republic and so on.  Our fieldtrip, however, was a three day sojourn in the Belgian town of Ypres, site of some of the bloodiest battles of the First World War.  We visited war cemeteries, watched one of the daily Last Post ceremonies at the Menin Gate, visited old trenches and dugouts, listened to archivists and historians explain the bloodshed and horror of those years.  In cross-curriculum preparation for the trip we had watched Peter Weir’s epic Gallipoli and seen a theatre production of the acerbic Oh What a Lovely War!.  And of course we read poetry – lots of it, like the above from Wilfred Owen.

Some years later, the image of all of the above, so sombrely presented to us as teenagers, was repeated this time by a mainstream comedy, Blackadder Goes Forth.  Here as with Weir’s Gallipoli, we saw the buffoonery of English generals and the elite classes sending hundreds of thousands of young men to their deaths – to be senselessly slaughtered – whilst they, the great, good and powerful, sat drinking tea.  The men died in battles over No Man’s Land, a strip of land between two opposing trenches over which enemies fought those four bitter years.  “Who would have noticed another madman around here?” ends the eponymous hero, as the ensemble of characters go over the top.  The madness he describes, as do all the other works, the people we met, our teachers and those who had survived the war that we were able to listen to, all spoke of the same thing: the pointlessness of what was essentially a series of failed land grabs and imperial jostling.  There was nothing to die for here – there was nothing noble, just the realisation that even young British men were expendable in the pursuit of empire.  More recently, a toned down critique for children from the BBC’s Horrible Histories, described the cause of the war as ‘complicated’.

This is what we were taught at school until our university years.  I didn’t attend some bastion of ‘left wing lunacy’ as many schools at that time that bucked the Thatcher narrative of Britishness were described.  I went to a mainstream grammar school, good then, better even now ranking recently in the top ten state schools in England.  This was not a decolonial history of the Great War that we were being taught.  There were no attempts to humanise the other side, pay tribute to fallen black soldiers and the forgotten of the Commonwealth or speak to the horrors inflicted whilst the European bloodletting was in full sway, perpetrated on colonised peoples by all the imperial powers simultaneously.  Some uncomfortable criticism did emerge – Alan Bleasedale’s drama The Monocled Mutineer was shown only once, after the BBC capitulated to government pressure not to repeat it.  It dealt with issues of desertion, the Étaples Mutiny by British troops, and touched on soldiers suffering post-traumatic stress disorders (many of whom also deserted and were executed as traitors).  However, the main story was simply thus.  Young men, mainly working class, in their hundreds of thousands were sent to slaughter for no reason except the glory of the elites that ruled them without a care.

How has this then turned into a narrative described by a Muslim woman of similar heritage as my own as a fight ’for freedom, for human rights’ that is commensurate with the events on the day of Ashura?  It is clear that this decade of death and destruction past has been achieved through the wholesale manipulation of its own colonial history.  What was once seen rightly as an event to be abhorred for its carnage is now recast as glorious and good.  Ben Elton, the comic and writer who co-penned Blackadder Goes Forth, once stated in an interview that he hoped had he been alive at the time of the two world wars, that he would have had the courage to conscientiously object to fighting in the first, and have the courage to enlist without conscription for the second.  The distinction is gone and replaced by a narrative that demands war led by the superior civilisation against those deemed inferior.

There is hope to be had, and it comes from surprising places.  Whilst we are subsumed by language and categories that demean, distort and perpetuate racism, from the labelling of others, including other Muslims as terrorists to the adoration of soldiers who have been used to perpetrate extreme violence on civilian populations of colour according to the prevailing narrative, some have broken out of this bind.  Whilst the well worn commonplace “One man’s terrorist is another man’s freedom fighter” often punctuates our lips when we disagree with each other, times of real change come when, like this veteran of the recent Iraq war from the US shows, a realisation of what you actually are comes.  Listen to the lot, but pay attention at 36 seconds: “We were told we were fighting terrorists, but the real terrorist was me, and the real terrorism was this occupation.”

As for Ashura, I once wrote for Q-News, some time in the mid-1990s a piece on commemoration ceremonies in the UK.  It began something like this, though I have no copy left to quote from:

It brought the ire of many onto me, but aside from the usual suspects who berated any commemoration of the events of Karbala, I was surprised to find that a supposedly Shia organisation had complained to the editor stating that the events being commemorated had no political currency and were to be venerated without context to the present time.  Said organisation went on to have a cosy relationship with successive governments in the 2000s and it seems clear that message of Hadrat Hussain not to give bayah to a tyrant was indeed lost on them.  From the piece I aver to above, it seems a generation of Youtube ulema have not helped to make matters clearer for new generations of Muslims growing up in the UK.  It is not their fault that neither Ashura nor the Great War are understood, but the thought of where the misappropriation of both is and will take us all is frightening beyond words.

Arzu Merali is a writer and one of the founders of Islamic Human Rights Commission.  You can contact her via the main IHRC email info@ihrc.org or tweet her @arzumerali