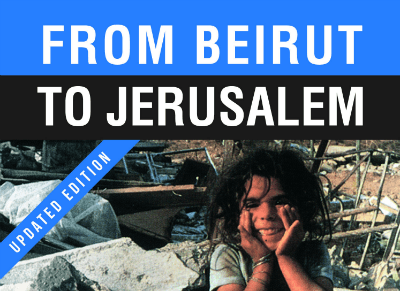 Dr Ang Swee Chai grew up supporting Israel. Arabs, she was told, were terrorists. But in 1982 the British media broadcast the relentless bombing of Beirut by Israeli planes. Shocked, her view of Israel began to change. It was then that she heard of an international appeal for an orthopaedic surgeon to treat war victims in Beirut. The petite woman – she is just under 1.5 metres – resigned her job in London, bade her husband farewell and set out on a journey to civil war Beirut.
From Beirut to Jerusalem is the true story of one woman’s journey to make the world notice the plight of the Palestinian people.
“I still have with me my picture of destitute Palestinian children of Shatila camp standing amid the ruin and rubble. They survived the massacre but lost their parents and homes. We thought all was lost. But they raised their hands making the victory sign and said to me: “We are not afraid, let Israel come”. I have returned many times to the camp but never been able to find those children again. They must have perished since. But they live forever in my heart. Whenever the situation becomes unbearable, I revisit this picture for strength” – Ang Swee Chai

To book a place or to find out more please email ashiya@ihrc.org.

Dr Swee Chai ANG, Consultant Trauma and Orthopaedic Surgeon, Barts Health, was born in Penang, Malaysia. She grew up and studied in Singapore. In 1973 she obtained her medical degree and in 1976 her master’s in occupational medicine at the University of Singapore. She was silver medallist for her undergrad, and gold medallist for her master’s. She joined her husband in exile in London in 1977, and became a refugee herself. She obtained her FRCS (Eng), and completed her orthopaedic surgical training in Newcastle-Upon-Tyne in Northeast England. She is the first female orthopaedic consultant appointed to the St Bartholomew and the Royal London Hospitals.

In the eighties and early nineties, she took time out to work as trauma and orthopaedics consultant in the refugee camps of Lebanon and later for the United Nations in Gaza and World Health Organisation in the West Bank. She is Co-Founder and Patron of British Charity Medical Aid for Palestinians.

She had also treated the victims of the Pakistan (Kashmir) earthquake, and as consultant trauma and orthopaedic surgeon operated on and looked after the victims of the 7 July 2005 suicide bomb victims in the Royal London Hospital.

Dr Ang is co-author of War Surgery and also of Acute Care of the War Wounded, in addition to other orthopaedic publications, also wrote From Beirut to Jerusalem documenting her experience in the Palestinian Refugee Camps in Lebanon and Gaza. Dr Ang told her personal story on Making a small difference | Ang Swee Chai | TEDxUCLWomen.