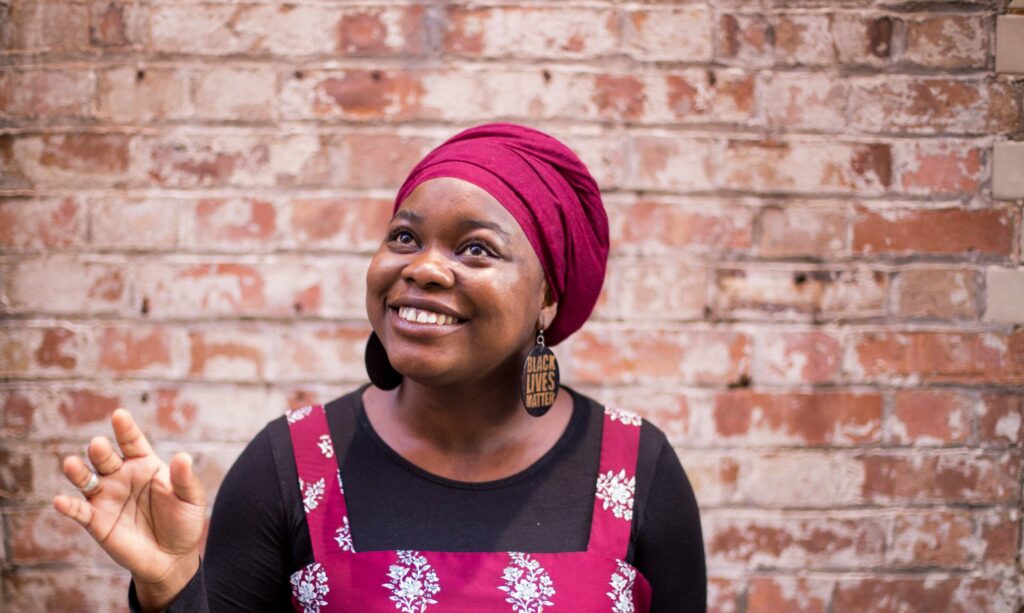 It was with great sadness that IHRC heard the new on 7 March this year, that Dr. Azeezat Johnson had passed away.  Dr. Johnson was one of the most inspiring of a new generation of critical thinkers, bringing a rigorous academic critique to her field and making her voice heard beyond the ivory towers of academia.

We were blessed to have Dr. Johnson’s participation at our events, notably the Islamophobia.  When this project was in its infancy Dr. Johnson’s contributions as both panellist and audience member helped set the trajectory of discussions for years to come.  We append some of her video contributions below.

We share below, the moving tribute by Iram Sammar, upon hearing of Dr. Johnson’s passing.  We pray that Allah swt grants the Marhuma with the most abundant and beautiful blessings on her continuing journey beyond this world and life.  Inna Lilla wa Inna Ilayhi Rajioun.

Great souls are remembered by those they leave behind, for what is left behind goes not to waste – they are bright gems for those to come.

Dr Azeezat Johnson, a brave and heroic author, an anti-racist geographer passed away on the 7th of March 2022. An unimaginable loss for family, friends and colleagues. Her family tweeted ‘Indeed, to Allah (ﷻ) we belong and to Allah (ﷻ) we shall return’ Inna lillahi wa Inna ilayhi rajioon (إِنَّا لِلَّٰهِ وَإِنَّا إِلَيْهِ رَاجِعُون). As I read on, my eyes welled up and my heart became heavy, she was a ‘sister, aunt and friend’ to all who knew her – but why did my own heart feel so much pain? We never met, yet I feel like I have lost a sister, someone I was learning so much from. A sister I looked up to and aspired to be like, one I had so many questions for. Who will I learn from now? She was saying and writing all that I felt in my heart – powerfully entering senseless spaces of prejudice and discrimination, obliterating parameters constructed to breed racism and Islamophobia. Even so, I write this piece with love and care, so those who are familiar with Azeezat’s work will gleam with joy – and those who are not, will discover: who is this inspirational luminary?

I had just been reading extracts from Azeezat’s co-edited book The fire now: Anti-racist scholarship in times of explicit racial violence and her shared website written pieces for Geographies of Embodiment Research Collective (https://gemcollective.org/), when it occurred to me to get in touch with her. As I opened my Twitter account, I was shocked to find out that Azeezat had passed away. I could not reach out to anyone who knew her to sooth the pain and shock I found myself in. My lack of connections in the spaces she glowed in was apparent. I turned to my mother, only she could comfort me at that moment, so I cried in her arms and said ‘Ammi (mother), I was going to contact Azeezat, but …inna lillahi wa inna ilahi rajioon’.

My mother comforted me and said, ‘great souls are remembered through their sadaqa jariyah’. In Islam sadaqa jariyah is charity which is not always material/monetary – it can be in the form of education, that continues to benefit mankind not only in the here and now, but in years to come beyond death – with rewards seen on Earth and in the Hereafter, bestowed by Allah (ﷻ), for the charity giver and all who benefit. So, I believe that Azeezat’s work will benefit not only those who are here now, but those who are yet to be born – especially women from every race/ethnicity and religion.

Azeezat brought a deeper meaning to the discussions around the geographies experienced by Black Muslim women. For me personally, as a Muslim woman living in Britain from the Pakistani heritage, her work gave me hope that there is a narrative beyond the fragile white privileged one we are sometimes forced to accept – or become accustomed to. Azeezat offered a reflective account of what it means to be a Black feminist in academia, beyond the White/Western feminist narrative. This is brave and very difficult at times, especially if you enter spaces where you are looked upon as the ‘other’ or ‘different’. It is not always easy to show courage, sometimes you just want to scream out loud and say: the ‘other’ to who, or ‘different’ to what? Why is there a norm to conform to?

What amazed me most was her rationale for her PhD thesis, which was completed at University of Sheffield – a university with an impressive association with important anti-racist scholars, such as Muna Abdi (@Muna_Abdi_Phd). Azeezat clearly identifies in her writing that Black Muslim women are homogenised into the categorized group of either Black or Muslim, therefore not seen as an intersectional existence which changes the lived experience of the actual Black Muslim woman narrative. Her works places emphasis on the clothing practices of Black Muslim women and the hostility they may face living in Britain and beyond its national borders. Experiences in the airport are perhaps another blog. I often think to my myself, it is so exhausting defending the hijab/niqab/veil. My take on this issue is: oh you, with your disapproving gaze, let us be. Why should I tell you why I wear what I wear – surely it is my choice?

As I embark on my own doctoral studies based on conceptualising anti-racism and decoloniality in school geography, I feel Azeezat’s work resonates with my own.  Her work on social geography are based on her interests in discussions about intersectional approaches to Black (and) Muslim geographies which resist and confront the marginalisation of Black women. This work is praised for its capabilities to unpack ‘how whiteness is neutralised within spaces of power and how that impacts everyday lived experiences, particularly for Black Muslim women’ (https://www.qmul.ac.uk/geog/staff/johnsona.html ). It is ground-breaking and inspirational not only for Black Muslim women, but also schools and institutions who struggle to address issues of racism (and) islamophobia through meaningful discussions/training on inclusion, diversity and equality as well as equity. These are important aspects of the racialised/homogenised Black Minority Ethnic (BME) lived experiences for institutions (commercial and public/government) to consider fully, not a mere tick box to show that there is an EDI (Equality, Diversity and Inclusion) task force in place.

Just reading through her twitter account you can see and feel the impact she had on all who knew her. She is a major loss to the Geography community, for her work was unique and inspirational. Azeezat was described by colleagues as a ‘remarkable person in so many ways’ (@AlastairHackney) and some joined Azeezat’s family and loved ones for her Jinazza (funeral) to express their condolences on behalf of her University, Queen Mary University of London. I also studied geography (BA) at the same university, so I had planned a visit which did not materialise. It was evident that Azeezat was ‘a bright & brilliant mind and soul’ (@jonorcup) and touched so many people with her critical contribution to the discipline of geography and beyond. Deepest condolences tweets were shared on her twitter account, one describing her as a ‘bright light in this world and an inspiration to so many’ (@mcneilwillson). No doubt, the academic world was devastated and shared their sadness, as this is a ‘great loss to Geography, feminism and humanity (@ParvatiRaghuram). The GEM collective wrote: ‘”stars don’t shine, they burn” and Azeezat burned so fiercely, so brightly, and will continue to do so for all of us who loved her’ (@gem_collective).

The picture that accompanies this article is of a star, which I painted in honour and gratitude of her soul and Azeezat’s short time on this Earth – the light shone bright مَا شَاءَ ٱللَّٰهُ, something I could not capture. I took inspiration for the painting from Azeezat’s work beautifully transpired in the GEM Research Collective – where a an amazing community of scholars exercise their desire to demand and embody liberation in a space free from the discriminatory gaze. They have successfully built a ‘different reality’ that refuses to isolate their embodiment of experiences from their engagement and production of critical scholarship. As a research community, GEM aim to make their ‘lives more livable’, as do I and many others who might look like us. Through the reconstruction of knowledge production, this space seeks to ask questions that are yet to be explored. For me, their statements pierce the heart to enable the trapped flow of hurt and suffocation caused by being treated like the ‘other’ in a place I always called ‘home’ – Europe, Great Britain, United Kingdom or England.

A warm thank you for reading this reflection, it comes from the heart. Azeezat’s life mattered, her work mattered and her legacy will matter. I was looking for an excuse to visit and meet this wonderful scholar, sadly this remains a wish that did not come to pass. Allah (ﷻ) grant her Janatul Firdous (the highest level of Heaven). Ameen.

Read the original of this on Salaam Geographia.

At the 2015 Islamophobia Conference

Challenging the panel at the 2014 Islamophobia Conference