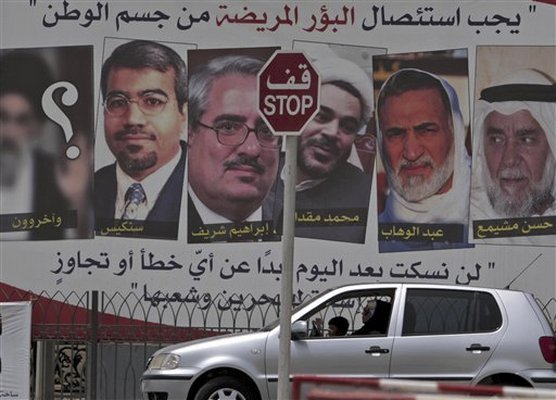 Please write to the Foreign Secretary of your country and urge him to actively campaign for the release of the 14 February Uprising detainees, who were unjustly targeted by the Bahraini authorities, and some of them sentenced to life imprisonment for their protests and activism.

The 14 February Uprising leaders were the most revered figures of the Bahraini revolution, whose commitment to democratic values and reformist discourse is unquestionable. Alongside the members of the “Bahraini Thirteen”, they have been sentenced to life imprisonment and subjected to torture during their detention. The main protest-related charges are of “attempting to overthrow the monarchy” and “plotting to topple the government”. With the court decision, the thirteen defendants had exhausted their last chance to appeal and the only avenue that remains for their release is a royal pardon.

In the wake of the uprisings in Egypt and Tunisia in 2011, Bahrain has witnessed its wave of revolutionary mass protest demanding for constitutional changes, greater freedom and equality.

From January 2011, activists and protesters camped for days at the Pearl roundabout, which became the centre of the protests. After a month, the government showed its brutal force in repressing the pro-democracy movement, and one month later it requested troops and police from the Gulf Cooperation Council. On 14 March, around 1000 troops from Saudi Arabia and 500 troops from UAE arrived in Bahrain to quell the protests, while martial law and a three-month state of emergency was declared.

In June, under the invitation of the international community the Bahrain Independent commission of Inquiry was established to assess the allegations of torture and false imprisonment.The report was released on 23 November and confirmed the Bahraini government’s use of systematic torture and other forms of physical and psychological abuse on detainees, as well as other human rights violations

Despite of the damning findings of the BICI report on many form of physical and psychological abuses perpetuated by the Bahraini authorities, there has been little changes in the government’s response: still practices such as the use of electro-shock devices, suspension in painful positions, beating the soles of the feet, beatings, threats of killing or raping the detainees or members of their families seem to occur to date. What is more, since the issuance of the BICI report in 2011, Bahraini authorities do not seem to have shown any signal of turnaround. As of 15 March 2013, the government was found responsible for 122 deaths as a result of excessive use of force by the police officials and of teargas during the demonstrations. According to the Bahrain Youth Society for Human Rights, only during the year 2013 the Bahraini Courts issued imprisonment verdicts against 651 citizens based on security charges related to the protests, while there are approximately 517 political prisoners currently detained in Bahrain -either arbitrarily or as a result of their pro-democratic activities.

The International community expressed its concern on illegal and unfair trials, alongside with mistreatment during detention, conducted by the Bahrain authorities by addressing false allegations using the “terrorist label”.  As a fact, the public prosecution invoked the same accusations of “setting up terror groups to topple the royal regime, changing the constitution and collaborating with a foreign state”.  Other charges included “insulting the army, inciting hatred, disseminating false information and taking part in rallies without notifying the authorities”. Following their arrest, the major revolt leaders were kept in solitary confinement for weeks and sent for trial before the National Safety Court, a special military court expressly set up in March 2011 to try the supporters of the Bahraini uprising.  They were allegedly subjected to the following:

1. Violations during the arrest and detention.

2. Torture by the National Security Apparatus

3. Physical and psychological torture at the military prison, including sexual assault.

4. Violations related to the interrogations done by the National Security Apparatus and the Military Prosecution.

5. Violations related to trials before the Military Court.

6. Vengeance on relatives of the detainees.

All trials constituted an example of misconduct and illegality in blatant contradiction to international human rights frameworks by which Bahrain should abide. The arrest of prominent opposition leaders represents undoubtedly the latest move by Bahraini authorities to tighten the noose on political opposition in the country, and silence anyone seen to be critical of the authorities.

For all these reasons, Islamic Human Right Commission believes that there are no legal grounds for the continued imprisonment of these activists. The lack of international standards sanction the invalidity of the sentences issued. Consequently, all trumped up charges should be immediately dropped and all detainees released; on the contrary, all allegations of torture and ill-treatment by the Bahraini forces should be thoroughly investigated.

Please write to your foreign secretary urging him to raise this case at the highest levels of the international community. For further details about the case please visit: the background briefing: Three Years and Counting – The Bahrain Revolution and its Imprisoned Leaders

I am writing with deep concern about the case of extreme injustice committed by the Bahrain government in crushing the massive pro-democratic protest in Bahrain since January 2011, and sentencing its top leaders under the pretext of supporting terrorism and plotting to topple the government.

Despite of the damning findings of the BICI report on the many forms of physical and psychological abuses perpetuated by the Bahraini authorities, there has been little change in the regime’s response: still practices such as the use of electro-shock devices, suspension in painful positions, beating the soles of the feet (falaka), beatings, threats of killing or raping the detainees or members of their families seem to occur to date. As of 15 March 2013, the government was found responsible for 122 deaths as a result of excessive use of force by the police officials and of teargas during the demonstrations. According to the Bahrain Youth Society for Human Rights, only during the year 2013 the Bahraini Courts issued imprisonment verdicts against 651 citizens based on security charges related to the protests, while there are approximately 517 political prisoners currently detained in Bahrain -either arbitrarily or as a result of their pro-democratic activities.

Despite of the aggressive manner in which Bahrain’s security forces handled events in 2011, the UK does not seem to intend to abandon any of its Gulf partners nor make a stand on humanitarian grounds. Such a hypocritical approach poses a credibility problem to the UK and puts it in a difficult position, caught between its core regional allies and mounting concern at the erosion of human rights and political space.

The most prominent leaders of the protest, namely, Khalil Al-Marzooq, leading figure of the major opponent party Al-Wefaq and ex-MP pf the Council of Representatives; Hassan Mushaima, founding member of Al Wefaq, currently the secretary-general of the Haq Movement and founding leader of the “Alliance for the Republic;  Abdul Al-Jalil Al-Singace, head of human rights bureau of the Haq Movement; Nabeel Rajab, chairman of the Bahrain Center for Human Rights, member of the Advisory Committee of the Middle East Division of Human Rights Watch, member of the Advisory Board of the Bahrain Rehabilitation and Anti-Violence Organization and president of Gulf Center for Human Rights; Ali Salman. the Secretary-General of the Al-Wefaq party.

All of them categorically deny all charges. After their first criminal trial at the Military courts, the civilian court confirmed the sentence of the former court against all the defendants. In the criminal trials that ensued, the government failed to produce substantial evidence or witnesses to prove these charges, whereas the trials have been conducted in breach of international standards. In fact, all arrests have been ordered without a legal warrant; the defence was denied the right to interrogate the prosecution witnesses and to present a verbal pleading or to fully assist the victims. In addition, the trial was semi-private as the court authorities refused to allow a number of independent human rights observers to attend the hearings, and lastly the medical records which included evidence of severe torture, have been deliberately neglected by judges.

Thus, in an utter disregard of lack of evidence and shocking miscarriage of justice, the defendant have been or are expected to be sentenced  to life imprisonment. The court decision marks the end of the judicial process for the detainees, the only avenue for their release is a royal pardon, and may lead to a bleak future behind bars for a crime they have never committed or ever intended to commit.

I strongly urge you to raise this case to the highest level in the international community and campaign for these five men who were just trying to fulfill their obligation to their fellow human beings. They are the best amongst us due to their concern for the oppressed yet they suffer the worst.