Home
Events
Barry Gardiner: Withdraw your invitation to the ‘butcher of Gujarat’!-PROTEST 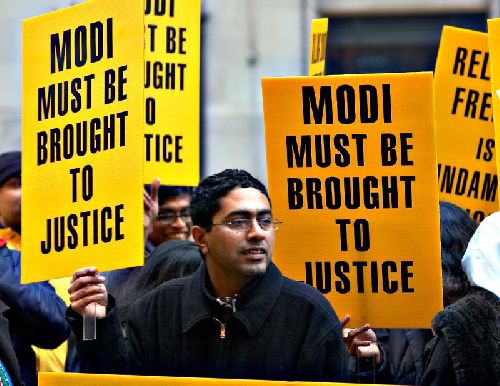 • Narendra Modi is the Chief Minister of Gujarat, the Prime Ministerial candidate of the Hindu supremacist Bharatiya Janta Party (BJP) and an avowed admirer of Hitler and his policies.
• In 2002, Modi presided over the genocidal attacks in which over 2,000 men, women and children from Gujarat’s Muslim minority community were systematically killed.
• This is the man whom Labour MP for Brent North Barry Gardiner has invited to come and address the House of Commons on the subject of ‘The Future of Modern India’.

What happened in Gujarat in 2002 has been amply documented and there is clear evidence (1)(2)(3) that the violence was orchestrated and sponsored by the state. The police had been instructed not to intervene while Hindu supremacist mobs linked to the BJP murdered and raped, selectively targeting the addresses occupied by Muslim families . According to a leaked report by the British High Commission in India the violence ‘had all the hallmarks of ethnic cleansing and that reconciliation between Hindus and Muslims is impossible while the chief minister [Narendra Modi] remains in power’ and that ‘far from being spontaneous’ it was ‘planned, possibly months in advance, carried out by an extremist Hindu organisation with the support of the state government.'(4)

Modi is currently making a bid to become India’s next Prime Minister and has launched a campaign using openly fascistic and anti-minority rhetoric. At the same time he is claiming that he has been absolved of wrong doing in connection with the massacres of 2002 by the Supreme Court of India. This is untrue, see for example (6).

While in the wake of the 2002 genocide and the clear evidence and documentation of Modi’s role in coordinating and sponsoring it, the UK, EU and US were compelled to distance themselves from Modi, more recently the British government is rehabilitating him. At a recent meeting with Modi in Ahmedabad, the Minister of State for the Foreign and Commonwealth Office Hugo Swire made it clear that this was in ‘the UK’s national interests’, meaning the interests of British big business (7) (8).

Now Barry Gardiner on behalf of the ‘Labour Friends of India’ has invited Modi to come and address the House of Commons on the subject of ‘The Future of Modern India’. The Conservative Friends of India have supported this invitation. This is purely an attempt to help British corporates sell their products and services in Gujarat in the interests of larger profits. It makes a mockery of human rights and ignores the three British citizens who were murdered during the genocide and whose families are yet to receive justice.

Modi’s past visits to the UK have been used to raise extensive funds and support for communal violence. A visit at this time is particularly dangerous and must be stopped.
We condemn this collusion in Modi’s attempts to deny his role as a mass murderer.
We demand that the invitation to Modi is withdrawn.

Notes
(1) See Human Rights Watch: ‘ “We Have No Orders To Save You”
State Participation and Complicity in Communal Violence in Gujarat’, April 30, 2002
http://www.hrw.org/reports/2002/04/30/we-have-no-orders-save-you
(2) Amnesty International: ‘India: Justice — the victim in Gujarat’ [Full Report] 27 January 2005 http://www.coalitionagainstgenocide.org/reports/2005/ai.27jan2005.gujarat.pdf
(3) ‘Threatened Existence: A Feminist Analysis of the Genocide in Gujarat’ Report by the International Initiative for Justice (IIJ) December 2003
http://www.gujaratfiles.net/files/iij.dec2003.report.pdf
(4) bbc.co.uk: UK report censures Gujarat rulers (http://news.bbc.co.uk/1/hi/world/south_asia/1951471.stm
(5) Amnesty International: ‘A decade on from the Gujarat riots, an overwhelming majority of victims await justice in India’ 29 February 2012
http://www.coalitionagainstgenocide.org/reports/2012/Amnesty-International-A-decade-on-from-the-Gujarat%20riots.pdf
(6) Sahmat – Citizens for Justice and Peace: ‘Press Release- Supreme Court clean chit to Narendra Modi ?’ http://www.kractivist.org/press-release-supreme-court-clean-chit-to-narendra-modi/ which explains in detail how the Supreme Court has NOT in fact absolved Modi of responsibility for the 2002 genocide as he has falsely claimed.
(7) See The Hindu ‘Embracing the Darkness’ October 23, 2012,http://www.thehindu.com/opinion/op-ed/embracing-the-darkness/article4023194.ece
(8) bbc.co.uk: UK India envoy to visit Gujarat for first time since riotshttp://www.bbc.co.uk/news/world-asia-india-19907453