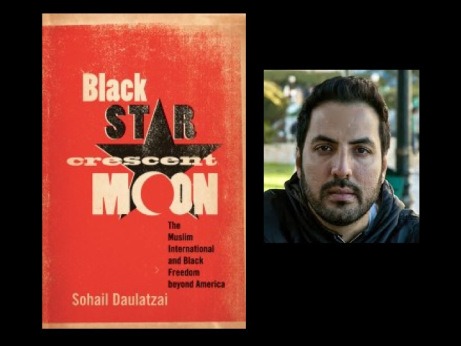 Black Star, Crescent Moon: The Muslim International and Black Freedom beyond America traces the interactions between the Black radical imagination and the Muslim Third World from the 1950s to the present.

Sohail Daulatzai is associate professor in the Department of Film and Media Studies and the Program in African American Studies at the University of California, Irvine. He is coeditor of Born to Use Mics: Reading Nas’s Illmatic.

Buy the book from the IHRC on-line store here

If you are based in or around London, UK and want to join the audience, please contact events@ihrc.org and book a space.  Space is limited so please book early.

The current post-9/11 climate has placed lslam and the West on an inevitable collision course, creating a climate of fear that has manifested itself in anxieties around immigration, the build¬ing of mosques, increased American intervention abroad, and the continuation of the “War on Terror.” The election of Barack Obama, however, was hoped to be a turning point in relations between the U.S. and the Muslim world, and his 2009 speech in Cairo tried to assuage fears and build bridges. But to no avail, as the specter and threat of Muslims to the U.S. and the larger West persists, even linking to Obama himself, as the “Arabian Candidate” in the twenty-first century.

As a result, Blackness, Islam, and the politics of the Muslim Third World are now a central part of the public and political discourse in the United States. But surprisingly, this is not new in American history. As Black Star, Crescent Moon reveals, there was a pre-history to 9/11, a pe¬riod beginning after World War II and leading up to 9/11 that was also marked by struggles over Blackness, Islam, and the Muslim world. As Malcolm X said in 1962, “the same rebellion, the same impatience, the same anger that exists in the hearts of the dark people in Africa and Asia, is existing in the hearts and minds of 20 million black people in this country who have been just as thoroughly colonized as the people in Africa and Asia.”

As a pre-history to the current “Arab Spring,” Black artists and activists linked discontent and un¬rest in Harlem and Los Angeles to anticolonial revolution in Algeria, Egypt, Iraq, and elsewhere, frequently looking to the anti-imperialist movements and antiracist rhetoric of the Muslim Third World for inspiration. In Black Star, Crescent Moon, Sohail Daulatzai maps the rich, shared his¬tory between Black Muslims, Black radicals, and the Muslim Third World, showing how Black artists and activists imagined themselves not as national minorities but as part of a global major¬ity, connected to larger communities of resistance. Daulatzai traces these interactions and alli¬ances from the Civil Rights movement and the Black Power era to the “War on Terror,” placing them within a broader framework of American imperialism, Black identity, and the global nature of white oppression.

From Malcolm X and Muhammad Ali to contemporary artists and activists like Lupe Fiasco and Mos Def, Black Star, Crescent Moon reveals how Muslim resistance to imperialism came to oc¬cupy a central position within the Black radical imagination, offering a new perspective on the political and cultural history of Black internationalism from the 1950s to the present.

“Timely and provocative, this globe-trotting book takes you down an almost forgotten road of Black freedom: the one that connects the struggles of the burning ghettos of America to the rage against imperial power in Muslim lands. Shining light on the artists and activists who helped pave that road, Black Star, Crescent Moon vividly shows that Black freedom struggles, whether through art or politics, are always global in scope. Written with an urgency that our times de¬mand, my man Sohail does what we in hip-hop have been doing for decades: uncovering histo¬ries, drawing connections, and trying to make people move. Rebel reading for right now!”