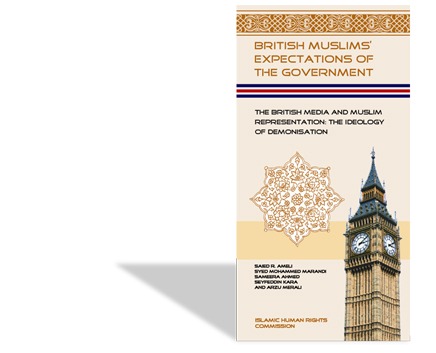 A study by the Islamic Human Rights Commission (IHRC), “British Media and Muslim Representation: The Ideology of Demonisation,” has found that British Muslims overwhelmingly perceive the Media as Islamophobic and racist. This is of particular concern as the media is the main source of information about Muslims for people who do not meet Muslims in their daily lives. Misinformation and negative stereotypes heighten tensions in intercultural relations and legitimize war against Muslims. The media needs to take account of Muslim views, monitor output to see how Muslims are represented, and improve accountability. The government must ensure that Muslims are protected from hate speech.

The report opened with a review of literature that explores the power of the Media to shape discourse and influence public perceptions. Thereafter, it is divided into two parts. The first analyzes the representation of Muslims on television, in the cinema, and in popular literature. These were chosen because they are seen as the main source of information about Muslims. Part two presents the findings of the study into British Muslim’s perceptions of the media and presents the recommendations.

Previous research has shown that the media is one of the major factors creating and perpetuating Islamophobia and negative attitudes towards Muslims. It was also shown to be a factor in Muslims feeling ambivalent about their identity as British citizens. Negative attitudes intensify discrimination among British Muslims. A survey of what Muslim school children wanted from the government found that media bias was their biggest concern. The report argued that the government and media must do more to tackle the negative portrayals of Muslims and create a cohesive and fair society.

The media has immense power because it shapes the way we understand reality, especially when we have no direct experience of what it shows us. It has “symbolic” power to “mark, assign, and classify.” What we see on our screens or read in our books does not merely reflect reality. Reality is presented to us through imagery and discourse that tend to reflect the cultural consensus of the dominant hegemony. This is bad news for minorities, who often find themselves being defined by their difference and represented in stereotypical and negative ways.

The report quoted the work of Whittaker who identified four Muslim stereotypes: intolerant, misogynistic, violent, and different. These stereotypes are deeply rooted in history. Orientalist discourse constructed a monolithic “Other” “as its barbaric, despotic, and inferior opposite or alter ego,” according to Edward Said. A discourse that divides the world into two camps of unequal power leads inevitably from domination to demonization, even in the absence of malicious intention.

This tendency to divide people into two warring camps finds echoes in the words of US president George W. Bush when he declared “You’re either with us or with the terrorists.” Muslims find themselves suspected of being a fifth column or of having divided loyalties. This is reflected in the portrayal of Muslims as “the enemy within” in the Hollywood movies, (both released before 9/11) The Siege and Executive Decision.

The report found that movies generally portray Muslims in negative ways, even the secular ones, typically as terrorists or wife-beaters. Particularly disturbing is the way in which this behaviour is linked with the religion of Islam itself. Thus, scenes of violence and terror are interspersed with shots of Muslims praying, to the extent that terrorism is elevated to the level of a “religious ritual.” Even Disney chose to begin the cartoon Aladdin with a turban-wearing camel-rider riding across the desert singing “O I come from a land, from a faraway place…. Its barbaric, but hey its home.” The report noted the propaganda power of movies with reference to the Creel Commission that through a movie turned “a pacifist population into a hysterical, warmongering population” within six months.

Due to the preponderance of negative news stories concerning Muslims, the report argued that news must be put into context. Most people are familiar with left- or right-wing political comment, but when it comes to foreign or minority issues, awareness of possible bias is lacking, as is historical context. The astonishing findings of the Glasgow University Media Group showed that despite plenty of television news coverage, only 9 percent of viewers interviewed knew that Israel was the occupier and the settlers were the Israelis. This figure was less than the 11 percent of viewers who mistakenly thought that the Palestinians were the occupiers and the settlers were Palestinian.

Popular literature from Byron to Bridget Jones was also analyzed. In contemporary fiction, there are two major genres pedalling negative stereotypes about Muslims. The Muslim as terrorist is a popular subject for thrillers by writers such as John Updike and Frederick Forsyth, in books that the report described as “openly racist.” Then there are books about life in Muslim lands written by “captive minds,” orientalists willing to interpret the East to the Western audience in a way that panders to the prejudices of their “masters.” Examples include Among the Believers by VS Naipal and Reading Lolita in Tehran by Azar Nafisi. Even “chick lit” is not free from stereotypes. “I hate Christmas … it makes you want to emigrate to a vicious Muslim regime, where at least all the women are treated as social outcasts.” (Bridget Jones’s Diary)

Dissatisfaction With the Media

Findings from the survey of British Muslims across the UK found that dissatisfaction with the media rose with age, citizenship, and with educational achievement. Respondents held that reports on Muslims in Britain were “selective, biased, stereotypical and inaccurate” and that they confused Islam and the action of Muslims. Movie portrayals of Muslims were also seen as negative, with a few exceptions, such as Morgan Freeman in Robin Hood. Muslims also complained of marginalization or of misrepresentation by a Muslim spokesman who did not reflect mainstream views at all, but minority voices, such as extremist views, or at the other extreme, Munira Mirza who spoke on the Danish cartoons issue as a secular Muslim but who later admitted she was an atheist.

The report noted that many Muslims did not complain about negative portrayals because they thought that there was no point; and of those who did complain, most did not get a response.

All the respondents concurred that the media is responsible for widening divisions between Muslims and the rest of the society. The report called for the government to get involved with encouraging a debate and commissioning studies on this problem. Specifically, it called for protection against hate speech to be extended, to give Muslims comparable with that extended to other faith communities such as Jews and Sikhs, and for this to be reinforced by “watchdogs with teeth” that could penalize non-compliance. The media should take responsibility for monitoring how Muslims are represented and should aim for balance through positive presentation of Muslim characters including in dramas.  It also requested both Media and politicians to improve access to minority groups including Muslims, so that different points of view can be heard. A contextualization of news reports and consultation with scholars were appropriate were also recommended. IHRC hopes that this will lead to better programs, better reporting, and a more harmonious society.