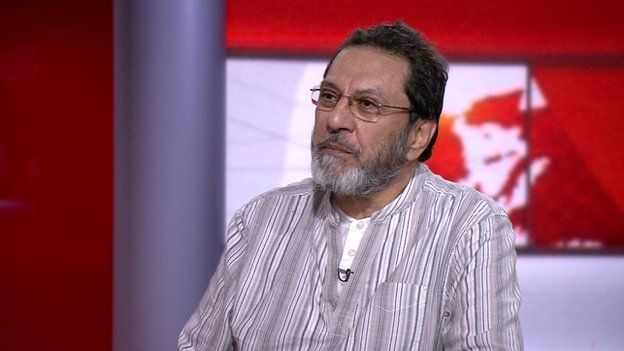 Prime Minister David Cameron has warned of the dangers posed by those who “quietly condone” Islamic State militants’ extremist ideology.

Speaking at a security conference in Slovakia, he also stressed the importance of tackling radicalisation at its source.

Mr Cameron highlighted the role families and communities can play in countering such radicalisation.

His comments came as a UK family were reported to have travelled to Syria.

Bradford sisters Khadija, Sugra and Zohra Dawood crossed the border into Syria with their nine children earlier this week, an Islamic State (IS) smuggler has told the BBC.

And Talha Asmal, 17, from Dewsbury, West Yorkshire, is thought to have become the UK’s youngest-ever suicide bomber when he reportedly blew himself up in Iraq on Saturday.

The prime minister said IS was “one of the biggest threats the world has ever faced”.

He said the police and intelligence agencies were not responsible for people deciding they wanted to go, and that recent cases show how young people from Britain are at risk of sliding towards violent extremism.

Mr Cameron said: “The cause is ideological. It is an Islamist extremist ideology, one that says the West is bad, that democracy is wrong, that women are inferior, that homosexuality is evil.

“It says religious doctrine trumps the rule of law and Caliphate trumps nation state and it justifies violence in asserting itself and achieving its aims. The question is: How do people arrive at this worldview?”

He said one reason was members of the Muslim community who “don’t go as far as advocating violence, but who do buy into some of these prejudices”.

Mr Cameron said it “paves the way for young people to turn simmering prejudice into murderous intent”, and to “go from listening to firebrand preachers online to boarding a plane to Istanbul and travelling onward to join the jihadis”.

He acknowledged there were other factors that contributed to radicalisation, “not least questions of national identity and making sure young people in our country feel truly part of it”.

A number of the families of men and women known to have travelled to Syria and Iraq – including the parents of 20-year-old Aqsa Mahmood from Glasgow – have said online grooming played a part in their decision to leave the UK.

However others, such as a friend of Talha Asmal, have said the idea that a teenager would cross borders solely because of online grooming “doesn’t fit”.

There was criticism of Cameron’s speech from some quarters.

Former government minister and Conservative peer Baroness Warsi accused the government – and both previous coalition and Labour governments – of “disengagement” from the issues, because they considered some British Muslim groups to be “beyond the pale”.

Labour MP for Bolton South East Yasmin Qureshi said Muslims were tired of constantly being called on to apologise for the actions of extremists.

“It feels absolutely awful. In Charleston you had a white man who went and killed nine black people in a church. I don’t hear anybody saying that the whole of the white population has to apologise for the action of one white man,” she said.

Massoud Shadjareh from the Islamic Human Rights Commission said it was “misguided and dangerous” to suggest that the solution was to tackle the ideology of Islam.

“The government for a very long time had associated barbaric groups like ISIS with not just Muslims, but the ideology of Islam – that they are somehow inter-tangled. The reality is that’s not the case,” he said.