In the last decade public opinion in Britain has swung far more pro-Palestinian than ever before, and an outcry for Palestinian human rights has also been seen by many different activists, including by the youth. The existing Palestinian movement has become unable to deal with this huge shift in the reality of the issue, and has been unable to capitalize on it as effectively as they can do. This could be due to a myriad of reasons, but amongst these is a failure to accept the different ideological views of humans who are concerned with human rights, and therefore support the issue of Palestine.

It was therefore a breath of fresh air to see the Convivencia initiative being launched, attempting to replicate the harmony between different faiths in Al-Andalus, an era which historians have dubbed “Convivencia”. This alliance of Muslim, Jews and Christians within the British anti-Apartheid movement, could then go a long way to working with the three different communities in Palestine and work towards the formation of one democratic state with the three communities returning to the state of living side by side in harmony as they did before Zionism divided the land.

The main speakers were from different organisations, being led by the Jewish Network for Palestine and the Islamic Human Rights Commission.

The first speaker was Haim Bresheeth-Zabner, of JNP, who is also a professor at SOAS and an author, as well as the son of holocaust survivors. He spoke at length about the history of the three communities living together in Al-Andalus and Palestine, making the point at how this enriched the culture. He mentioned how the Jews and Arabs of Al-Andalus reintroduced ancient Greek texts, which had been lost to Europe during some very extremist forms of anti-Classical philosophy-Christianity had taken hold over the continent, and that this year we have seen Easter, Passover and Ramadan come at the same time, which traditionally would have been a time of coming together in Palestine, where everyone passed gifts to each other of different faiths, but now that is impossible, the reason being Zionism. 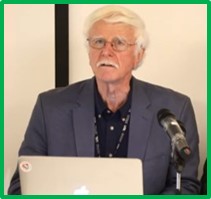 He also made clear that the racism and brutality of Zionism had nothing to do with Judaism. He spoke about the Nakba, how 2/3 of Palestinians were ejected from their land in order to create Israel, whose creation has nothing Jewish, liberal or just about it. He then made clear that the problem was also the media description of these events, such as the BBC who in their 100 years of existence have never spoke about the issue of Palestine as if there was a solution, in the same way that they speak of Ukraine, as if there is a solution.

Massoud Shadjareh from the Islamic Human Rights Commission, spoke about how the division between faiths perpetrated by Zionism in Palestine, has affected relations between religious groups Worldwide. Likewise, he said that whilst the activists themselves had been trying to create a movement for unity in the Middle East, they had themselves, across all three mainstream Abrahamic faiths, become like family. 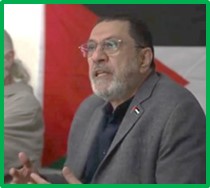 He also looked at how interfaith actions have been used in the past to normalize Zionism, and often held on the basis of either forcing participants to accept, or stay quiet on Zionism, making clear that to support Zionism is to support apartheid, war crimes, colonialism, and the killing of children, and that within all three faiths, “Apartheid is the most ungodly thing”. He reiterated that when fighting against apartheid in South Africa, they weren’t fighting against the white, but were fighting against apartheid, and not only in a part of South Africa, but across the whole country. 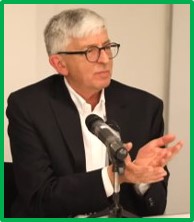 Reverend Doctor Stephen Sizer then spoke, saying how it has always been his dream to see Christians, Jews and Muslims working together to bring about peace, justice and reconciliation in Palestine. He said that it is heartening to see Christian leaders in Palestine so enthusiastic to support the alliance and that he was optimistic that British Christians leaders would join themselves. This was especially important in his view due to the fact that 9 out of 10 Zionists are Christian, and therefore he believed that Christians have a responsibility to fight for Palestinian human rights. He made clear that Christian support for such crimes was not new, and said it was painful for him to have to acknowledge how some Christians had tried to justify the Trans-Atlantic Slave Trade and the apartheid in South Africa.

Reverend Doctor Sizer then went on to debunk the theological myths propagated by Christian Zionists to support the apartheid, particularly debunking the myth that the bible says that Palestine should belong exclusively to the Jews, by quoting verses from the scripture which said that Palestine and in one case Jerusalem belongs to all those who believe in God. He stated that on occasion people have wrongly equated “choseness” with “supremacy”. 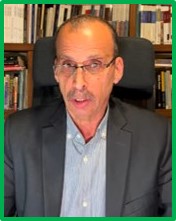 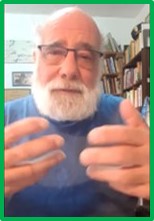 The audience then heard from Jeff Halper of the Israeli Committee Against House Demolitions who sent a video. He spoke of how the ANC were aware that they were not going to get the support of the majority of white South Africans, nor of the governments of the World, “so

they turned to their only ally, which was the people of the World”, and that the same was true of the FLN in Algeria. He also said that ANC knew early on that the whites were going to remain and very early on said that South Africa belonged to all the people in a non-racial society, which is what the One Democratic State Campaign is calling for. Then a video message from the chair of One Democratic State, Awad Abdel Fattah was played, who said that the Palestine case, was the last case of the 19th Century style European colonialism, whilst support for Zionism is still rampant in the colonial powers today, and he pointed out the United States and Britain in particular. He spoke about how One Democratic State Campaign had brought together Palestinian and Israeli settlers to attempt to define a vision of a free and equal democratic Palestine, and give hope to the people. He said that with this vision they will attempt to build a strong connection between activists in Palestine and the international community towards building their vision, for which the Convivencia Alliance will be a crucial. 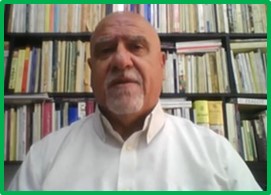 The next video message to be played was from Rifat Odeh Kassis of Kairos Palestine, a coalition of the Christian communities in Palestine, Rifat said that this initiative was coming at the right time, as Israel has become more aggressive in its policies towards the Palestinians, whilst the United Nations had been useless on this issue, and many countries in the EU and elsewhere are creating laws to criminalise non-violent resistance to Zionism, also pointing out that the same time, some countries in the Arab World are normalising their relations with the apartheid regime, “at the expense of justice for Palestine.”, whilst the Palestinian leadership is corrupt and split. “Despite bloodshed, and hardship, and injustice”, he continued “There are people and communities, just like you, who dream of a new land and a new human being capable of rising up in the spirit to love his or her brothers and sisters, that’s why Kairos Palestine welcomes this initiative and joins it.” 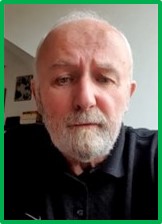 The fourth video to be played was of Mick Napier, from the Scottish Palestine Solidarity Campaign, and spoke regarding the historical lessons we can learn for a Zionist free Palestine. He said that: “it is an axiom of political Zionism that Jews cannot live amongst others, but must relocate to a Jewish state”. He reported that Zionists had murdered anti-Zionist indigenous Palestinian-Jewish leaders who had organised protests against Zionism and that during the Nakba, thousands of Jews had demonstrated against the violence in Jerusalem, and for the right of Jewish and Arab communities to live together, rather than separate into a Jewish Supremacist state. He also mentioned Al-Andalus as a template for how the Jews, Muslims and Christians can once again live together in Palestine.

The final video message was from Professor Ramon Grosfoguel, professor at the University of California, Berkeley, who said that Muslims, Jews and Christians have many things in common, but especially when it comes to the question of justice. He said he wanted to send his full support behind the project. 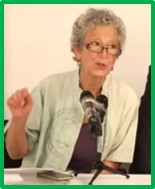 After the videos had ended Naomi Wimbourne-Idrissi, of Jewish Voice for Labour spoke about how in the past, many interfaith initiatives had been infected by anti-Palestinian racism, and at times been used as a front for promoting such hatred. She ended by saying that Convivencia starts dialogue from a basis of all groups supporting justice for Palestinians, filling a gap in the market for interfaith dialogue based on actual peace and justice. 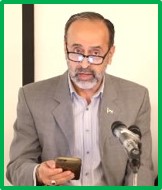 Zaher Birawi, of the Palestine Forum of Britain, spoke next. He thanked everyone for the “completion of this wonderful document” and mentioned the participation of the PFB in helping to write it. He mentioned that the new IHRA definition of anti-Semitism, is being used to deny British-Palestinians their rights and of those who criticize the policies of the apartheid, whilst Zionism has used interfaith groups to promote their narrative, including penetrating Muslim communities in Britain normalising apartheid acceptance in mosques and other Muslim institutions. He continued to say that the Oslo agreement had failed to bring about justice for the Palestinians.

As the event drew to a close, many questions and comments were made, Haim Bresheeth stated that there are few words more frequently used in the Hebrew bible then Shalom (peace) and tzedek (justice). He also said that Convivencia would not only help the situation in Palestine, but also combat Islamophobia and genuine anti-Semitism in the UK. Massoud Shadjareh also added that there can be no compromise with Zionism, and that like in South Africa there is no solution that will cater to an apartheid ideology. 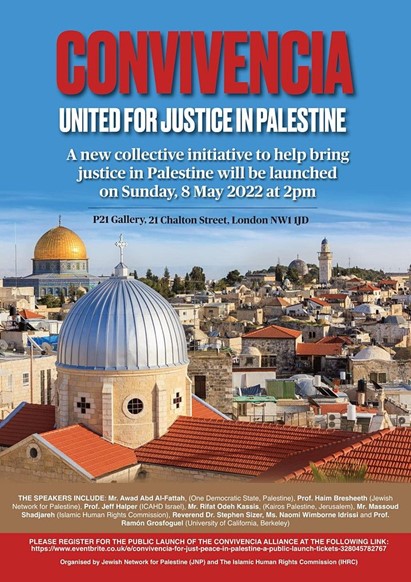 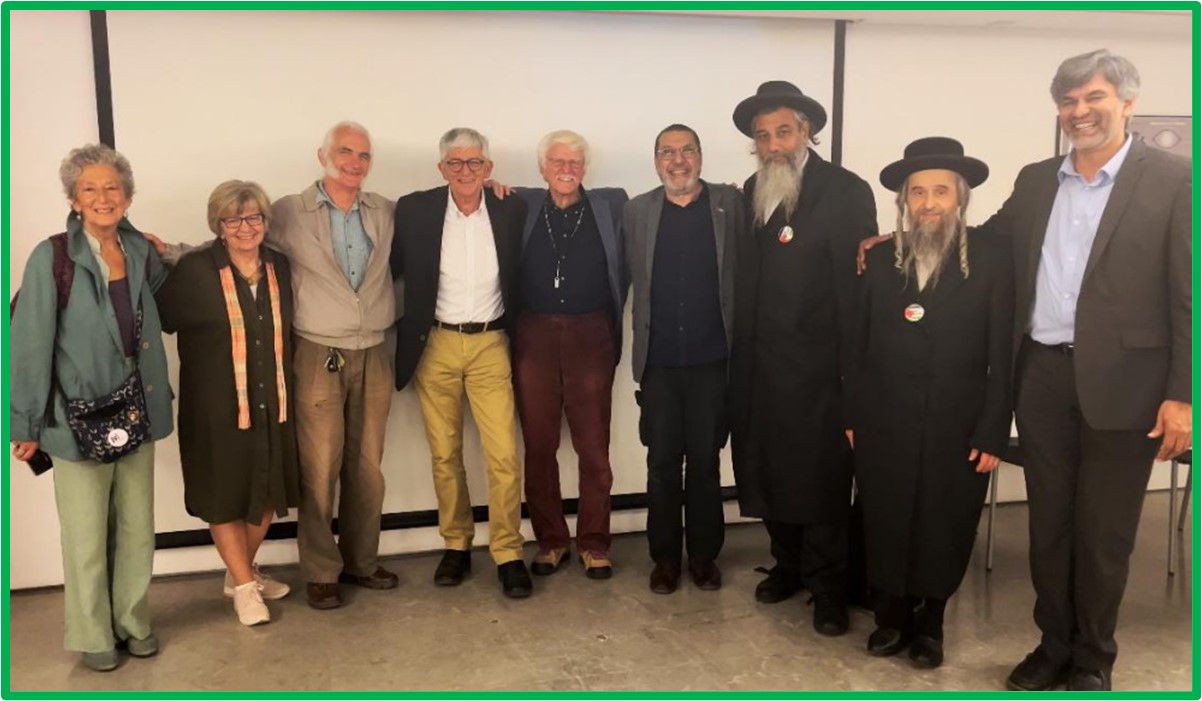 Supporters of the Convivencia Alliance

(TCF) The Cordoba Foundationis a UK-based research and advisory group

Zaher Birawi – Chairman if the Palestinian Forum in Britain

The event can be viewed online at: