Home
Research
Countering Islamophobia through the development of counter-narratives 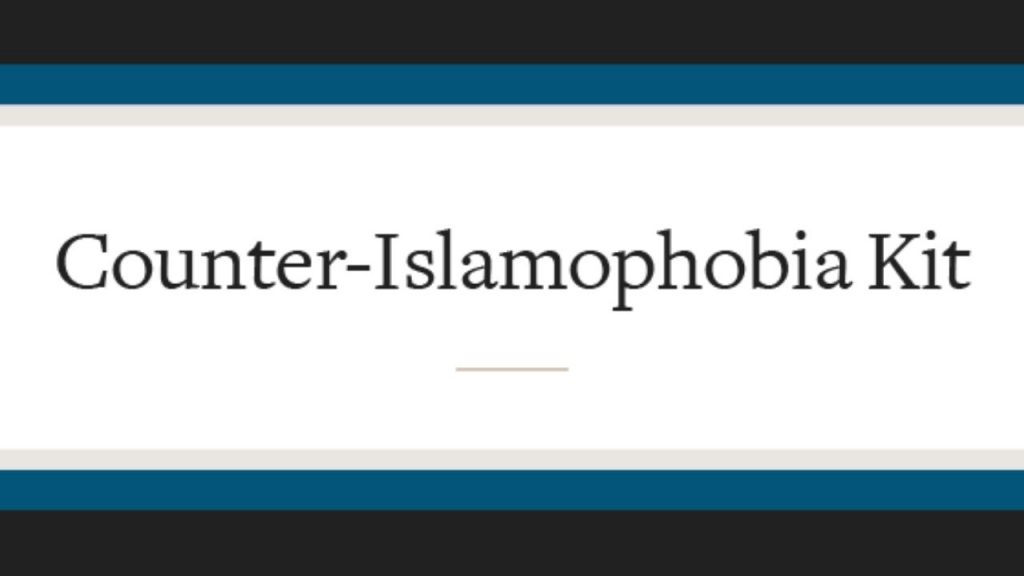 The aim of this report is to categorise prevailing narratives of Muslim hatred within the context of France, identify their key elements and interlocking contextual environments employing the Domination Hate Model of Intercultural Relations (IHRC 2016). First section focuses on existing literature and studies dealing with Islamophobia in France. We shall first explore the history of the term and retrace the evolution of its use in the contemporary period and then reflect upon various definitions of the term adopted by scholars, practitioners and institutions.
…read the full report

The report draws on S. Sayyid’s (2014) conceptualization of Islamophobia through its range of deployments, while stressing the historical, cultural, sociopolitical, and economic contexts particular of Germany. The first section of the report maps the existing literature addressing hatred against Muslims. The second presents an overview of the Muslim population in Germany, and a short description of the formation and development of anti-Muslim hatred predating 9/11 and expanding ever since. The final section unravels the main discursive strands shaping Islamophobia/anti-Muslim racism in Germany.
…read the full report

This report overviews narratives of Islamophobia in the United Kingdom using the Domination Hate Model of Intercultural Relations (DHMIR) (Ameli, 2010) to map the overlapping and interlocking prevalence and impact of such narratives on social and political discourse. This report will overview existing work in the field that measures and narrates the impact of Islamophobia, a background to the Muslim community/ies in the UK, he discussion around definitions of Islamophobia, historical and current events that impact the relationship between the understanding of Muslims in society and their experiences, before outlining the key anti-Muslim narratives operating in British political, media and other discourses. The praxis that reproduces and sometimes undergirds such narratives is pivotal in understanding what Islamophobia is and provides a key tool for policy makers and academics to assess what and how impactful a narrative of Islamophjobia is, and Sayyid’s (2012) argument regarding the performative functions of Islamophobia provides ta key frame for this report in its presentation of the relationship between the environment created by hate discourses (Ameli and Merali, 2015) and its impact.
…read the full report

This report provides an overview and discussion of counter narratives to Islamophobia in Germany, while mapping the actors, initiatives, and institutions engaged in challenging the growing reality of Islamophobia and its manifold ramifications. Moreover, this national report on Germany correspond with the second workstream of the research project Countering Islamophobia Through the Development of Best Practice in the Use of Counter-Narratives in EU Member States. The purpose of this research project involves a critical engagement with the most dominant narratives of Islamophobia, and their comparison vis-à-vis the most salient counter narratives standing against this form of racism.
…read the full report

The search for effective counter-narratives is located in a relational methodology (to be expounded further below) which sees racism as the “interactive relation between repressive racial ideas and exclusionary or humiliating racist practices across place and time, unbounded by the presumptive divides of state boundaries” (Goldberg, 2009). The Domination Hate Model of Intercultural Relations (Ameli, 2012) collapses the distinctions between legal, political, educational and other institutional praxis by focusing on discursive patterns within institutions and social and political commentary. This approach also allows for an analysis of the impact of racism along a continuous scale rather than being confined to discrete areas based on their status as actionable under criminal law (e.g. hate crimes), civil law (e.g. discrimination) or other complaints mechanism (e.g. media representation) or as a matter for conceptual study, analysis and transformation. This allows for a discussion of counter-narratives by themes rather than by the necessary mechanisms proposed to effect change.
…read the full report

The second part of this report gives a brief account of the methodology used to categorise the counternarratives. It also provides an analysis of respondents by group and explains some of the challenges linked to the identification and ranking of counter-narratives. The third part examines the counternarratives to Muslim hatred from the colonial period until today. It provides an insight into their formation against the backdrop of mobilisation of Muslim communities and their allies in key moments in history. The fourth part of this report gives a detailed account of the most prevalent counter-narratives identified through interviews and completed by a wide range of sources. Their deployment in different discursive environments, their form and the way they operate are equally analysed. The counter-narratives are organised in clusters according to hate narratives they tackle. The report’s major findings are summarised in the last part of the report, which also includes a schematised list of dominant counter-narratives.
…read the full report

This paper provides an overall briefing on this project, which was concerned to describe and explain the discursive contents and forms that both Muslim hatred and counter-narratives to Muslim hatred take in the eight states examined in this project: Belgium, Czech Republic, France, Germany, Greece, Hungary, Portugal and United Kingdom.
…read the full report

The last two decades have witnessed a steep rise in anti-Muslim prejudice, discrimination and violence in Britain. Studies such as those by Ameli and Merali (2015) have all shown an increase in anti-Muslim antipathy to the extent that it can be said that the experience of Islamophobia has become almost universal for Muslims. While Islamophobia is indeed a relatively new term it bespeaks a phenomenon that is centuries old and has its roots in racial discourse.
…read the full report

Islamophobia needs to be recognized as a form of racism permeating German society. Such recognition should be followed by measures that thwart and prevent the manifold manifestations of this phenomenon in legislation, media representation, labour market, education, and housing.
…read the full report

These narratives, based on anti-Muslim prejudice rooted in colonialism and racist and far-right ideologies, lead to exclusion, discrimination and Islamophobic incidents against individuals and places of worship. Research2 shows that ‘otherisation’ of Muslims by politicians and mainstream media affects the mentality of the general population and makes Muslims more prone to physical and verbal attacks and Islamophobia.
…read the full report

Delegitimizing Islamophobia: The Legal and Normative Needs of the UK – Arzu Merali

The second report in the Counter- Islamophobia Kit project highlighted ten key Counter-narratives to Islamophobia that were needed, or already in operation and in need of support and extension. To do so, 35 Interviews were conducted with persons who were chosen because of their existing work on counter-narratives to Islamophobia and other forms of racialization. They included several broadcast and print journalists and editors, a senior member of the Anglican clergy and current master of a Cambridge University college, academics researching on different aspects of Islamophobia, (including (but not solely) on education, media representation, hate crimes, securitization, discrimination, sociology of religion, social cohesion), lawyers, artists, authors, charity trustees, curators and advocates. A range of secondary material was also analysed, including social media initiatives, websites, different arts projects, advocacy initiatives and NGO work and legal campaigns.
…read the full entry

Economic crisis of the early 1970s, growing unemployment that hit hard mainly the low-skilled working class immigrants and eventually laws restricting immigration voted to stop the influx of no longer needed foreign labour, changed the way the immigrants from the countries of the former French colonial empire were perceived by the public. Populations of Maghrebi origin were often framed in the political and media discourse as having been unable to integrate into the French society (Brouard & Tiberj 2005). This was so on account of their ethnic and cultural identity as well as their religious affiliation, using unemployment, poor academic achievement and delinquency rate as evidence (Muxel 1988). As Bertossi (2007) remarks, while in the 1980s, the notion of integration still referred to a process by which foreigners became citizens, at the end of the 1990s, this notion no longer concerned foreigners but their descendants who were already French citizens.
…read the full entry

The recent federal elections and the rise of the far-right Islamophobic political party Alternative for Germany (AFD) as the third most influential political force in the parliament, not only preoccupied social commentators as it presented a tangible threat to German democracy (given that it is the first time in six decades in which a party with overtly nationalist and racist discourses has secured representation in the Bundestag), but also because the AFD’s success revealed the growing currency of Islamophobic discourses in German politic and social life. As such, the AFD’s presence in the Bundestag transformed the already well-cemented and disseminated racial discourses on Muslims and Islam into a political program which, undoubtedly, will be part of the political discussion and system of Germany in the years to come.
…read the full entry

The Wrong Side of Britishness: Anti-Muslim Narratives in the UK – Arzu Merali

The end of the first workstream of the CIK project in the UK saw the publication of the ten key narratives of Islamophobia. These represented only the most prevalent and potent rather than the sum. The level of impact vis-à-vis the prevalence of a narrative within or as a precursor in media and political discourse to policy and law were the final determiners of what were the more impactful narratives.

Counterposed with existing research into experiences of Muslims in the UK, these narratives have several counterproductive and in some cases counter-intuitive (based on stated policy aims) outcomes.
…read the full entry

The overall aim of the Action is to compare the operation of counter-narratives to Muslim hatred in eight EU member states in order to examine their use and effectiveness in terms of providing alternatives to prevailing narratives of hate and hostility and reducing racism. This will involve assessing prevailing narratives of Muslim hatred and the local, national and international environments in which they operate, identifying the content, utilisation and impact of counter-narratives in each member state context and comparing their operation and outcomes in order to identify best practice in the form of a Toolkit of Counter-Narratives.

This communication reflects the views only of IHRC and the European Commission cannot be held responsible for any use that may be made of the information contained therein.