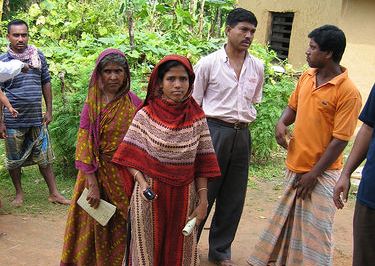 “I firmly believe that we can create a poverty free world; if we collectively believe in it”

These affirmative words were delivered by Mohammad Yunnus upon receiving the Nobel Peace prize in 2006 which stands alongside an impressive array of titles decorations which include the 2009 Presidential Medal of Freedom . The Norwegian Nobel Committee decided to divide the award into two parts, one part to Muhammad Yunnus and the other to Grameen Bank, Yunnus’ brainchild. Grameen Bank is a microfinance organization and community development bank that was established by Yunnus in 1983 after almost a decade of experimenting with microloans around Chittagong, his hometown in eastern Bangladesh. Grameen Bank provides collateral free credit to poor rural Bengalis, with a special focus on women. The Norwegian Nobel Committee decided to award Yunus and Grameen Bank the Nobel Peace Prize in 2006 because:

“Lasting peace cannot be achieved unless large population groups find ways in which to break out of poverty. Micro-credit is one such means. Development from below also serves to advance democracy and human rights”[i]

For more than thirty years microfinance has been portrayed by a large bulk development theorists and practitioners as the foremost tool for poverty reduction and social development in the third world. Grameen Bank boasts over 6.91 million borrowers in Bangladesh; the awarding of the Nobel Peace Prize can be seen as the culmination of three decades of successful expansion of what has been termed as the “Grameen system”. This has been adopted by development organisations the world over, most notably BRAC; the world’s largest development NGO.

The Methodology of and purported benefits of Microfinance

Grameen Banks methodology strives to follow the following set of principles when undertaking their loan programmes:

1. Start with a survey of the social background of the loan recipient.

4. Restrict credit to income generating operations and make it possible for the borrower to be able to repay the loan.

5. Investing in human resources, training teachers which will provide them with “real development ethics.”

The majority of Grameen Banks programs specifically target women on the basis that they are more likely to be credit restrained then men, have restricted access to wage labour market and inequitable share of power in household decision making. “Gender empowerment” is the rallying call for microfinance initiatives (MFI). Pitt and Khandker stress that bargaining power within the household is quantified through each members utility, “In a simple version of collective decision making, the household’s social welfare is some function of the individual utility functions”. Pitt and Khandker then cite the empirical research of neo classical economists Browning and Chiappori to bolster this argument. Research conducted on Canadian households.

A quantative heavy research piece conducted on 1,798 randomly selected rural households then concludes that Economic liberation equals, for Pitt and Khandker, female empowerment in the realms of

Several complications arise from this linear method of delineating female empowerment from economic capability; which is an issue with neoliberalism and its compatibility with feminism. However one theme that arises across the spectrum of microfinance plaudits is their inability to acknowledge the inexorable link between credit and debt.

The flipside of credit and the question of female empowerment

MFI stems from the Neo-liberal school of development based on a liberal notion of “free movement of capital”. However the change from government to corporate funding has resulted in demanding repayment dates. This belief of “economic liberty” becomes contradictory when the absence of choice in regards to repayment schedules is now an integral component of microcredit programmes. In turn this is compounded by the fact that little assistance or understanding is given to those families who suffer financial stress or shock; “Acts of God” or seasonal productivity, to name but a few examples, are often not taken into account. MFIs were partly introduced to deter women from relying on questionable loan sharks and credit obtaining from informal agents, however many have had to turn to this in order to pay off existing MFI debt, the irony in this is almost tragic. The end game is

Liquidation of assets by families in order to meet deadlines but this comes via a process. BRAC, the largest NGO in the world and operating Grameen style MFIs in Bangladesh adheres to the following policy. Firstly, the kin of the indebted person is approached, if this fails, field staff work through Village Organisation (VO) leaders (invariably men). Field staff threatens complete withdrawal of credit if one borrower defaults on the loan repayment. Social pressure or what can commonly be coined as bullying is then employed by the VOs. Often this is just the tool needed to ensure swift repayment but if this fails the VOs are directed to reclaim livestock, cooking utensils, ancillary housing equipment and homes. What is crucial to note is that “staff pressure” is key in triggering “peer pressure” and so the resulting destitution of households caught in the microdebt stems from BRAC policy. In depth studies show that although microcredit has aided numerous families in Bangladesh, a certain section of borrowers under particular circumstances such as delayed investment returns, loss at the initial stages of business development are often unable to repay the debt. The result is being caught in an endless cycle of debt. Even when successful, Microfinance enterprises displace existing businesses and scramble the pre-existing fixed level of demand.

Is microfinance a successful route out of poverty for those in the third world? Microfinance enterprises are essentially a gamble, and in the time of global capitalism any business venture is like rolling a dice, however in a globalised world where the playing field is often uneven, it is the first world that inevitably benefits. One of the most attractive themes of MFI is its claim to empower women; owning your own business, to the neoliberal development theoreticians, equals breaking the bonds of patriarchy. The interactions of Professor Lamia Karim with a Bengali widow illustrate how MFI enforces patriarchy rather than dismantling it.

“An elderly widow told me that on the day she was returning home from the Grameen Bank with her loan, her nephew demanded that she hand it over to him. She added that he said “Aunt, I know that you received a loan from Grameen Bank today. I have need of money for my business, and as my aunt, it is your duty to give it to me”. She explained that as a widow and as an aunt it was her familial obligation to help her nephew. If she disagrees, the family would pressure her to relent”

It is problematic to laud the claim that microcredits economic empowerment facilitates the erosion of structural patriarchy as the program fails systematically to take into account cultural contexts and societal trends. Rural Bangladesh has an extremely complex social makeup in which anthropologists and sociologists have written a plethoric number of books and journals on, none of which come with a singular route to empowering women. MFI’s serve to uphold the neoliberal agenda which dominates development discourse. Fresh ideas and concepts need to be brought to the table if there is to be any real progress in eradicating poverty.