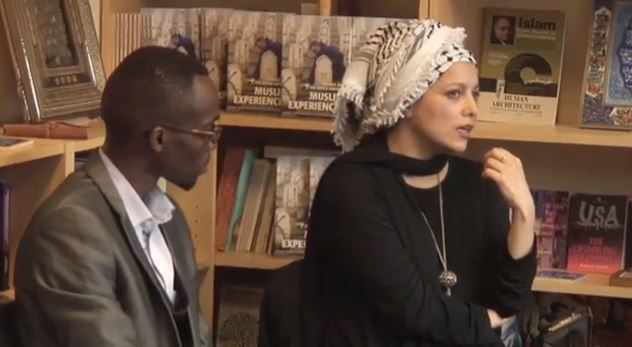 You can watch the video of Houria’s talk here.

Houria Bouteldja, founding member and spokesperson of the Party of the Indigenous of the Republic (PIR) is a French citizen of Algerian heritage and outspoken activist on the rights of French residents of African and Arab backgrounds.

The Party of the Indigenous of the Republic  –  the first decolonial political party of its kind in France – was formed in 2010, the movement which led to its founding having been in existence since 2005. PIR is a response to the cultural and social environments of France, positing itself in the political sphere with the Call of the Indigenous Republic , issued in January 2005, which highlighted the Islamophobic, Zionist and Eurocentric conditions of a neo-colonial Republic.

The Party of the Indigenous of the Republic considers itself to be a product of double dissolution – one of African independence, and the integration of a previously colonised population, perpetually viewed as the ‘indigenous’ within France. The present climate in France has led to a collective consideration of alternatives in an attempt to counteract the present climate – a climate which has led to a majority of 70% Arab and Black prisoners within the French judicial system.

PIR wishes to replace the notion of integration with independence. The organisation is not merely an anti-capitalist movement, but extends beyond it, to a de-colonial party.

Indigenous of the Republic: PIR considers the indigenous to be all colonial subjects of the Republic of France. These are peoples who have previously been subjected to an indigenous code of inferiority which has not ended, despite the independence given to their nations of origin. These individuals are still discriminated against on the grounds of being an indigenous, continually being considered non-white, and thereby attaining an implicit status of otherness. This is despite the French Republic viewing itself a leader in the field of Human Rights.

PIR places significant importance on independence – more specifically, a political, ideological, organisational and financial freedom. The organisation has refused to define this independence in abstract terms, and instead gives it context.

This means a political ideology that received its influences from real and authentic experiences– a political ideology which counteracts and opposes principles imposed on the organisation through the structures such as the Enlightenment, Marxism, Western Rationalism, Universalism and Republicanism. PIR considers that these contribute to a linear historicity aiding the concept of white supremacy, and represents a situation whereby an imposed fascination of white privilege – on the grounds of race – must be opposed.

Becoming a de-colonial means to become an emancipated spirit – a break and liberation from the existence imposed on the non-white by the white. PIR holds that the potential to become a de-colonial is held by everybody, but is continually repressed. PIR’s goal is to aid in the realisation of this potential. This forms the first of three arguments put forward by PIR – an Ideological Rapture.

PIR has benefited from a series of first-generation activists and groups, whose experiences have helped to develop a legacy of scepticism of the left and its deliberate instrumentalisation of both moral anti-racism and the objectives of the PIR movement. PIR holds that there is a need to maintain a strong-political body which radically affects and alters the root of the problems which exist in France.

The left places a Eurocentric emphasis on the issues of class and employment, and while the Party of the Indigenous of the Republic accepts the importance of these issues within France, PIR prioritises for the indigenous the issues of racism, police violence, Islamophobia and Zionism.  As a famous Algerian sociologist once stated: ‘Existing means existing politically.’ In order to highlight these significant issues, it is vital that an organisation exists which encourages both action and debate within the French political arena. PIR also prioritises the furtherance of its  decolonial political objectives over the formation of political alliances.

The party’s view on advocating a de-colonial stance in Europe is not limited to the white populous  – rather, PIR suggests that the status of the post-colonial individual living in Europe – as a group freely and willingly residing under a social order which places the indigenous in an inferior position – is complicit in a system of exploiting the colonised peoples of the South. It achieves this through both inaction, and a blind consumption of capitalist goods.

The reliance of other existing political organisations on government funding has resulted in a significant lack of ideological independence. The financial aid provided by the State places significant restrictions on the actions of political bodies. PIR has maintained its independence through the refusal to request financial aid from the government. PIR is a self-funded organisation, aided by both donations and sales of products conceived and made by the organisation.

PIR is now focusing on a global decolonial project with an emphasis on the problems of the indigenous affecting the entire French community. The organisation holds that to liberate the indigenous, it is a prerequisite that you must liberate the White, and vice-versa.

From the very inception of the Party of the Indigenous of the Republic, the organisation has faced accusations of being a racist, ethnicist and anti-white organisation, primarily from the left-wing. This is a direct result of the party’s refusal to adhere to the tenets and principles that define a leftist organisation. This has led to PIR becoming isolated from other political and anti-racist organisations, in addition to the local community, all of whom fear the loss of financial support from the left-wing.

There are however, a number of positive results arising from PIR’s independent stance. Within the last 8 years of the party’s existence, PIR has succeeded in establishing itself on a national level, and has achieved an untainted organisation with complete autonomy.  PIR seeks a collective liberation, and has in so doing put difficult questions towards the Eurocentric Left regarding the coloniality of power.

What does it mean to decolonise Europe?

– Political project before everything. Dismantle the philosophy through a political fight.

– Have a collective, decolonial majority in order to break white supremacy.

– To convince the white decolonial population that they must organise themselves to participate in the fight within their community. This requires an expenditure of energy to fight the colonial grip of the left-wing, before the fight with the extreme right.

– To convince the white population. PIR holds that the white colonial power has an interest in maintaining their white privilege. The bourgeois desire a retention of the present class system, and this issue brings a consideration of the question: what can compensate the white for the loss of white privilege?

The Party of the Indigenous of the Republic holds that the last question is a key issue in decolonisation, which has a bearing on both the state of the indigenous, as well as the current economic crisis.