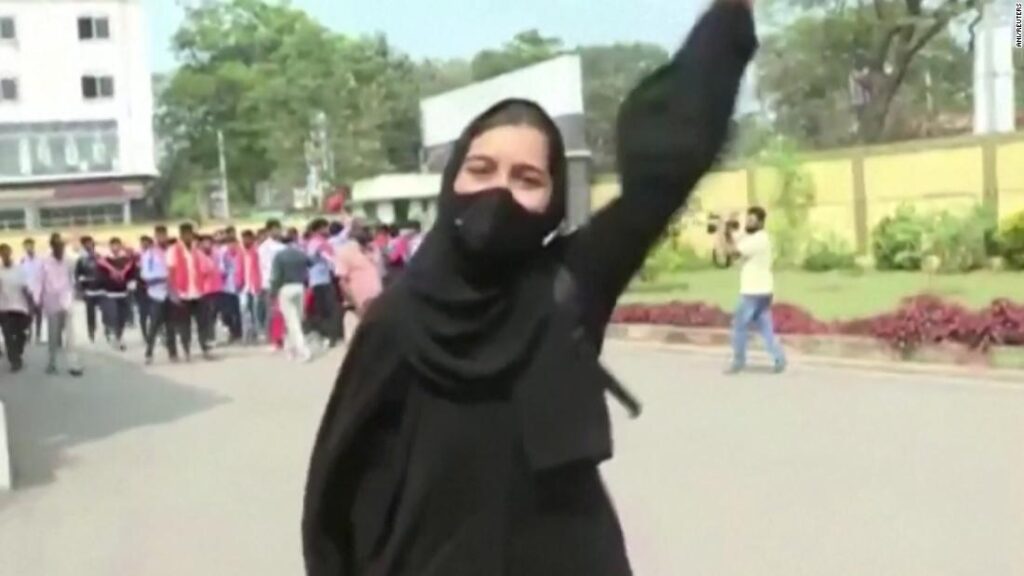 In the state of Karnataka, Muslim girls have been banned from classes because they wear the headscarf. Many of these young students have been protesting outside their schools against the ban. Still, they have been subjected to various forms of intimidation from Hindu extremists, including counter-protests, made up of mostly older men who are not pupils of the schools themselves. The ruling Karnataka BJP, has tweeted the names and personal details of the girls petitioning, including two minors, to incite Hindu extremists against them. Although this is being painted in the media as a ban on an item of clothing, it is, in fact, a ban on the women who wear it; Muslim women who would instead not attend a class than remove their hijab.

Whilst they are currently reviewing the case, the Indian Supreme Court has said it expects the ban to be upheld until they come to a decision, which means that until then, many young women will be missing out on their education. Indian actor Chetan Kumar was arrested after criticising the validity of the judge in the case in a tweet, due to him making misogynistic comments to give an accused rapist pre-arrest bail. He said that the accusers’ story was “A bit hard to believe” because “The explanation offered by her that after the perpetration of the act she was tired and fell asleep is unbecoming of an Indian woman” and said that such behaviour is “Not the way our women react when they are ravished”.

In India, there are currently federal state elections taking place in some states, including in Uttar Pradesh, the largest federal state in the World, with a population of 250 million, and if an independent country would be the 5th largest in the World. It’s considered to be one of the most important states in Indian elections, which can swing general elections, and is around 80% Hindu. The far-right Hindutva party, the BJP, which rules both the National and the current Uttar Pradesh government, has been using the Karnataka protests to whip up Islamophobic fervour. It relies on division and intolerance to religious minorities to win elections.

His Excellency Hissein Brahim Taha, and to all the nations of the Muslim World,

Re: The Karnataka hijab ban

Asalamu Alaikum, first I would like to congratulate you on your appointment as Secretary-General I hope that under your stewardship, the OIC can become a leader of justice and the promotion of peace within the World.

I am no doubt sure that you have heard about the recent protests taking place in the Indian state of Karnataka, in which Muslim women are being banned from entering classrooms. Those young girls are standing up against these Islamophobic rules, and in turn are not only being harassed and intimidated by non-state extremist groups, but also being used by the ruling BJP party to whip up Islamophobia, which they rely on to gain support. The BJP in Karnataka has even gone as far as to release the names and personal details of some of these girls.

This situation is unacceptable, and the Islamophobic government currently ruling over both India and the state of Karnataka have no interest in listening to the brave young sisters who are valiantly standing up for their rights. Their struggle is part of the global rise in Islamophobia; therefore, they are not just standing up for themselves, but for the rights of Muslims all across the World.

I hope that you will take swift and immediate action in support of our young sisters and the religious minorities in India, of which Muslims are the worst hit. As I am sure you already know, the Muslim Ummah is one body, and when one part is hurt, the whole body suffers. As representatives of all Muslim countries, I believe you have the responsibility to lead our Ummah against such injustices and represent us within the international arena, as you have done so with the case of the Rohingya.

I look forward to hearing your response on this important issue, which I and many other Muslims, feel deeply about.

If you are unable to send mail, you can also tweet them with a screenshot of your letter at @OIC_OCI

You can also send them a copy via the internet on their website at: https://www.oic-oci.org/contact/?lan=en