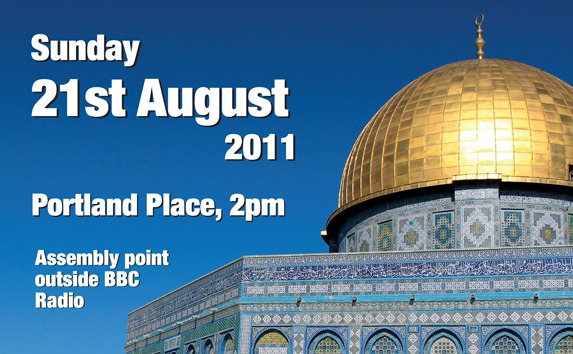 The British nationals are to protest against the Israeli occupation of Palestine that has led to constant series of violence for more than 63 years, leaving millions dead, dislocated, and being hopeless for their future.

Pro-Palestinian protesters will gather on Sunday August 21 at Portland Place (near BBC Radio) at 2pm and march to Trafalgar Square.

The march has been organized and supported by several anti-war groups across Britain, they are to use the event as a reminder to all fight backs for justice across the world.

The organizers predicted that Sunday’s Al-Quds Day march would again be the focus of attacks by far-right groups in Britain, since the march has been attacked by fascist groups together with some Zionist.

Anti-Islam group English Defence League will stage a rival protest against the Al-Quds Day demonstration to express their opposition against spread of Islam in the country. EDL London Division has urged its members to support the group’s counter protest.

This is while that British police has not yet taken any step to stop the EDL rival protest on August 21, despite the fact that the EDL fans have always been blamed for their violence and public disorders.

Analysts believe that UK authorities, media, and anti-Muslim campaigns have been inflaming anti-Muslim prejudice by criticizing and even declaring open season on Muslims. The so-called prejudice has apparently changed to systematic and open state discrimination in the country.

The sudden formation and rise of the racist and anti-Muslim group, English Defence League (EDL) that is against the spread of Islam and Sharia law, is the result of politicians and the media encouraging Islamophobia across Britain.

Consequently, insulting, ignoring, and caricaturing Islam and Muslim communities is considered as being acceptable, since they judge these defaming ways as part of culture, not racism.

IHRC chairman Massoud Shadjareh said of Al-Quds Day: “This year, as in years past, we are seeing a broad range of people come together to stand shoulder to shoulder with the oppressed men, women and children of Palestine.

”We will not be cowed by any fascist, racist or supremacist group. This is a peaceful event and the truth of the cause is manifest.”

Al-Quds day was first initiated by Imam Khomeini, founder of Islamic revolution of Iran, as last Friday of Ramadan, to express solidarity with the Palestinian people and opposition to the Israeli occupation.

“The Quds Day is a universal day. It is not an exclusive day for Quds itself. It is a day for the oppressed to rise and stand up against the arrogant,” late Iranian leader said.