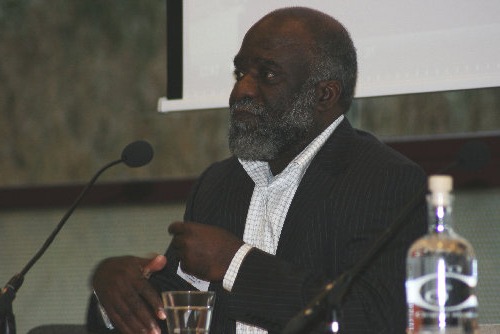 Dr. Kwame Nimako author and co-author of over 30 books, reports and guidebooks on international relations joined IHRC on Wednesday 19 October to discuss his latest work ‘The Dutch Atlantic: Slavery, Abolition and Emancipation’ (co-written with Glenn Willemsen).

Watch the conversation with Dr. Kwame below or read a report of the event and summary of the book underneath the video on this page.

The Dutch Atlantic provides an erudite history of Dutch slavery, revolts, abolition efforts and emancipation and assesses the historical consequences of this for contemporary European society.

Kwame Nimako started the discussion by providing a historical overview on the legacy of Dutch slavery and how predominantly black Dutch groups in the Netherlands in the past century have brought the uncomfortable and often ignored subject of the Dutch involvement in slavery on the national political agenda.  This sparked the inauguration of the National Slavery monument in 2002 in Amsterdam which led to the establishment of the National Institute for the Study of Dutch Slavery and its Legacy the following year.

Nimako introduced the concept of ‘parallel histories ’ and ‘intertwined belongings’ explaining that people that have parallel histories and intertwined belongings  share the same space but have different experiences and memories.  Nimako provided the example of how during the transatlantic slave trade the captives and captors may have stayed aboard the same ship (intertwined belongings) but they shared different experiences (parallel histories) and therefore this has led to differences in understanding of the perception of slavery, freedom and emancipation.  Consequently the research developed in the book goes beyond the parameters set by Dutch and European historiography and provides a holistic understanding of the transatlantic slave trade and its consequences.

Professor Kwame Nimako went on to discuss how the slave trade and slavery intertwined economic, social and cultural elements, including nation-state formation in the Netherlands and across Europe and how the European powers implemented policies that expanded the Atlantic slavery and colonisation.  He detailed how slavery was a profit making scheme and how goods produced by the enslaved like silver during the colonisation of the Americas became global commodities and was traded as far as the Middle East and Asia; income from which further strengthened European trade and reinforced the perpetual vicious cycle of enslavement.

Nimako concluded the evening by explaining that for a thorough understanding of European state formation, economic development, social formations and social thought in Europe, the Atlantic world and the slave trade has to be seen as a major contributor.

The Dutch Atlantic is available online here, and the video of the event will be online soon on the IHRC YouTube TV channel.