Event Report: Book Launch – ‘Palestine… It Is Something Colonial’ 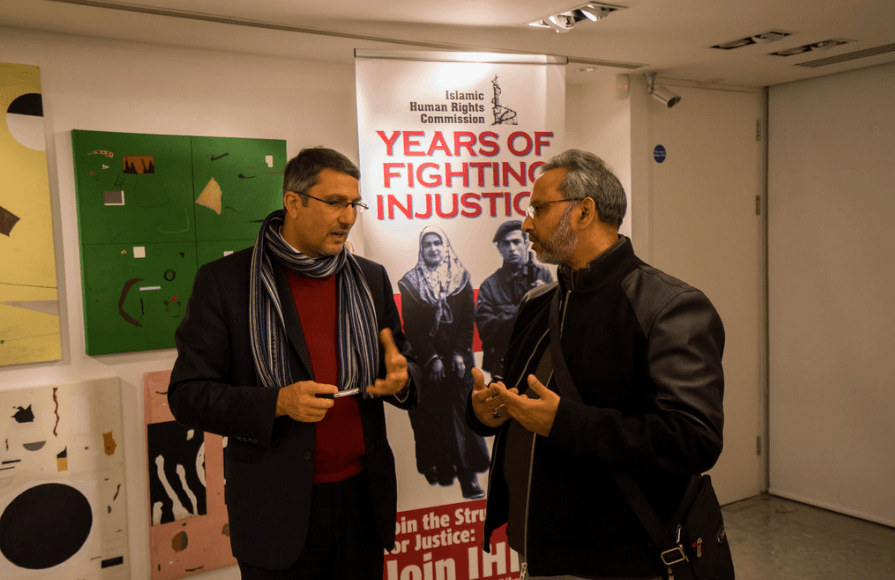 On 7 December 2016, IHRC hosted the launch of Dr Hatem Bazian’s book ‘Palestine… It Is Something Colonial’ published by Amrit Publishers. The event was an auspicious one as Dr Bazian had travelled from California especially to discuss his book and take questions from an eager audience.

The evening was chaired by Press TV’s Amina Taylor and she eloquently spoke of the book with reverence. Firstly, she introduced IHRC’s Arzu Merali who spoke on behalf of Amrit Publishers. She stated that the complete memory of what the Palestinians have been through has been obliterated. This was a point that Dr Bazian would come to expand on later.

Following this we saw a few words from photographer Sara Russell. The book launch was held at the P21 Gallery in London and for the evening the space was transformed to host prints from Sara’s exhibition ‘Another Day.’ The same exhibition was originally held at the IHRC Gallery in 2014 and consisted of photos of regular daily life in Palestine. Sara made it clear that we all have a responsibility to speak out about the oppression of the Palestinian people and that it is not ok to remain silent.

Amina Taylor then introduced Dr Hatem Bazian who spoke at length about his book. He started off by saying that often when we think of Palestine we think of it in the context of the Nakbah or the ‘Six Day War’ or the protests and rallies that take place today. But the truth of the situation is that the colonial legacy of Palestine begins on 9 December, 1917. From that point, Palestine entered the colonial project because of the British and the issuing of the Balfour Declaration. This all took place at the end of World War II, when colonialism was ‘ending’ and was generally thought of as ‘unacceptable.’ ‘Palestine… It Is Something Colonial’ focuses on the need to reframe the Palestine situation through the lens of settler colonialism.

Dr Bazian also looked back to 1492 – a period he describes as critical. He places Palestine within the context of the dismantling of Ottoman structures by colonial powers. It came to be that religion was deployed as something imperial that gave authority for dispossession. Today, the settlements in Palestine are rationalised with a biblical narrative. In the same way, Zionism uses nationalism and colonialism to justify the existence of Israel. It is an ideology that replicates Eurocentricity and surrenders to anti-Semitism instead of seeking to defeat it.

The conversation was then brought back to the topic of settler colonialism – this is where the settlers take over the land with no use for the indigenous population. In the USA this resulted in the mass genocide of the Native Americans. On the other hand, it could also result in a kind of transfer project which sees the indigenous peoples moved away from the good, resourceful land and placed in ghetto-like areas instead. This is what happened in both South Africa and Palestine.

A famous quote was mentioned; Israel is so often referred to as “a land without people for a people without a land” but we know that this is blatantly not true. The land was obviously inhabited and to suggest otherwise is simply settle colonial discourse at work.

Dr Bazian did not claim to offer any solutions in his book but stated only that whatever solution is found – it must be a decolonial one.

Questions were also taken from the floor where various topics were discussed such as the dangers of being pro-Palestinian in academia, the Rhodes Must Fall movement, ongoing thievery from the Global South by the North and the need to reframe international law.

It was a successful evening that was attended by an illustrious crowd of academics, activists and community members who were enlightened and enthralled.