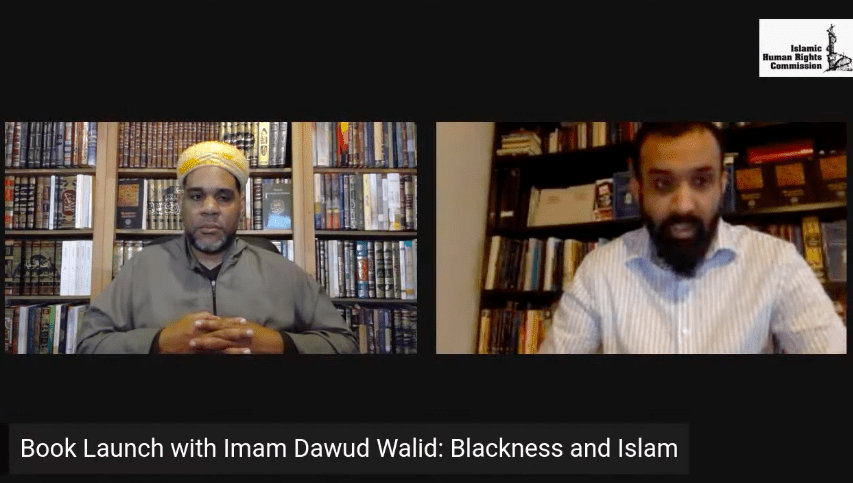 IHRC held a book launch with Imam Dawud Walid for his latest publication Blackness and Islam on 10, April 2021.

Purchase a copy of Blackness and Islam here.

Hosted by Abed Choudhury (Head of Advocacy at IHRC), Choudhury explained that IHRC decided to take on Walid’s work due to the relevance of the issue of the Black Lives Matter movement, which has come to the fore, and Black converts and Black African Muslims complaining about issues within the Muslim community for many years, such as marriage, not being allowed on mosque committees, and generally being discriminated within the community. The focus of this work is not just on modern movements, but also historical issues, therefore the publication of this book is important in taking steps to understanding issues around racism and anti-Blackness.

Blackness and Islam is published by Algorithm Press, which is an impression of Islamic Human Rights Commission.

Before we begin today’s conversation, I want the readers and viewers to know that in the need for Blackness and Islam, this is not some sort of modern or postmodern novelty to write about the issue of Blackness and Islam. This is actually a subgenre within Islamic literature, meaning that it is not something that has been written about prolifically across centuries, not like the sciences of hadith or tafsir. This is a genre specifically Muslims have written about to address problems that come from the same root that goes back over 1200 years. We in our research have seen there are no less than 12 books written in the Arabic language going back to generations that specifically talked about and centered Blackness within Islam. This construct of Blackness and how it was understood 1100-1200 years ago, in the Arabian Peninsula or in Iraq, for instance, is different in how we would understand it in the UK or USA in the 21stcentury. Nonetheless there was a particular discourse around it.

The first of those writings was by the Mu’tazili scholar, known as Al Jahith, who was a black Iraqi in Basra, and he wrote the first treatise on this particular issue that was famously or some may say, infamously titled ‘The Glory of the Blacks over the Whites’. There is historical basis for this as a reaction as to why he titled the way that he did. The great Hanbali polymath, who was the descendant of Abu Bakr, his name is Abu Faraj Ibn Aw-Jawzi An-Hanbali; he wrote a book titled, ‘Illuminating the Darkness (or Ignorance) as it Pertains to the Blacks and the Abyssinians’.

Jalaladdin As-Sayuti, who lived in Egypt but was of Persian ancestry and had an Abyssinian wife, wrote three books on this topic.

Why did these people write about this? Besides other books in Islamic literature, that discuss the history of the Abyssinians, that mention noble Black people among the Sahaba and the second generation, and even those from the Prophet’s (saw) family who married or sired children by African women. Why this specific discourse? This is for two reasons.

The first, this work is to write about or address the issue of anti-Black racism that comes about in two different forms. The first form is those who perpetuate or are the dispensers of anti-Black racism. This information was compiled, written and disseminated as a type of cure or to address the issue of colourism, and Arab and then later, Persian chauvinism that began to creep up in the Muslim community.

The second reason is to address the issue of Black self-loathing or people who are Black that fall into the issue of inferiority complexes. They think that somehow lighter skinned Arabs and lighter skinned Persians have de facto more authority in Islam simply because of skin colour or even that lighter skin is more beautiful, and thus darker skin is less preferable even when it comes to issues of marriage. Unfortunately, we can see the effects of this of why in the African subcontinent and West Africa in particular, we have a multimillion dollar, dare I say, billion-dollar industry alone, and of course this is also a big industry in India and Pakistan as well, of skin bleaching cream, amongst Muslims. It is something that predates colonialism; colonialism compounded this issue but even before the British and French colonised Muslim lands, there were issues of colourism and anti-Blackness amongst the ummah, so we cannot blame all of our issues on the false ideology of white supremacy emanating from Western Europe. That false notion that expresses itself in systemic racism as well as imperialism that only compounds a pre-existing condition amongst the ummah.

This is part of the value of the book, and it could be a tool to use for people who are older and distilled or perhaps take the discourses in the book and simplify it for children so that they can hear stories about the sahaba, the descendants of the Prophet (saw) and describe their phenotype and how they look.

We as Muslims are a people that tell the truth for the sake of truth. We tell the haqq for the sake of Al Haqq (swt). The reality of it is we have a lot of whitewashing amongst Islamic imagery. If we were to look at the movie The Message, it is almost as if we would think that Bilaal was the only Black companion. The first martyr in Islam, was a Black woman, Sumayyah bint Khabbat, but in the movie, she looks Greek. Amar ibn Yasser was a Black man, a Black Arab but we look at how they are described or shown. There was a TV show put out in regard to Umar ibn Al-Khattab, and his great grandmother and his grandmother were both Abyssinian, they were both Ethiopian, and he was described as tall and dark in skin colour, but when you see the movie, they look like they are from Damascus or something. It is not to put down people with lighter skin, Arab is not a race but the Arabs of old were predominantly darker skinned until Islam spread, and they began to have children by Armenians and Persians. As Islam spread, Turks and Arabs over time have become lighter in skin colour.

But this is whitewashing. The same issue in Persian depictions of the maddhab imami, or the Twelver Shia. In the pictures, sometimes how they portray Sayyidina Ali or Sayyidina Hussein, or the other imams, are whitewashed pictures of how Persians depicted Zoroaster with the green turban. But that is not how they look. Many of these imams as mentioned in the book, had mothers from Africa and were as dark as myself or darker, phenotypically more Sudanese than Persian.

I am totally against depicting picture form of the Twelve Imams or others; it is like introducing a type of white Jesus complex into Islam for Sunnis and for Shi’is.

So, what is at stake? Besides this issue of anti-Black racism being an issue that shakes the faith of Muslims who are Black especially new converts in which anti-Black racism has literally ran people out of the religion. This discourse is also important in answering Orientalists, including Black Orientalists and Pan-Africanists because there is a narrative going around, especially in the States, that says to Black people in America that if you convert to Islam, you are trading in one slave master for another. Meaning you gave up what they call white Christianity or Christianity brought to West Africans by the white colonists, and replacing it with what they would say, the religion of the Arab slave traders who have always looked at Black people as second-class Muslims, like a slave class. So, we also have to clarify that to answer this because this discourse by Orientalists and Pan-Africanists actually impedes our dawah efforts.

The Qur’an does not discuss race in the way we discuss race within the modern construct we have and I believe race is a manmade construct. Allah (swt) mentions in the Qur’an, He is the One who made the differences in our languages and skin colours, and these are signs for people of knowledge. He mentions we have a common ancestor, Adam and Eve and these two parents was in His divine plan that He made us into shu’ūb and qabā’il. Shu’ūb is translated as nations or Sha’ab in singular. The Arabs of old do not understand this as nation states today. We shouldn’t think of shu’ūb as UK or Canada etc., it is a relationship to lineage. Qabā’il are clans closer in lineage than those that are from shu’ūb. The Qur’an itself is not explicit in regard to skin colours of any of the personalities.

In the ahadith literature, there are explanations given. The Qur’an relates to elusions of skin colour of two different prophets; Adam alayhissalam. In classical Arabic, Adam means ‘dark brown’, then Allah also says Adam was created from black, sticky mud. For Musa, there is corroborating evidence in hadith that Musa was black. Musa was raised within the family of the Pharoah, and one of his miracles that was given as a sign was that he would take his hand and put it into his cloak, pull it out and it would be white. It would not be a miracle if his hand was white, and he put it into his cloak and it was still white. The miracle is if he is Black in skin colour, like that of someone from Senegal, and he put his hand in his cloak and it was the colour of a Roman when he pulled it out, that would be miraculous.

Those are elusions to skin colour in the Qur’an. Then of course we have ahadith literature in Sahih al-Bukhari and others that give a physical description of how Musa alayhisalam looked, and he phenotypically looked like a black man.

Choudhury further enquired about how Blackness would have been understood by the Prophet (saw) and his companions. He said we have this habit of projecting affection on that period where nothing wrong happened among those people, so did racism exist and what can we learn about the Prophetic practice in how he may have addressed it? Choudhury and Imam Dawud Walid also discussed the source of anti-Black racism in the Muslim community today, as Walid mentioned it is not necessarily rooted in white supremacy and colonialism. Furthermore, Choudhury asked about the current situation we find ourselves in, where we see Anti-Black sentiments exist in the West, as well as among Muslim communities in the West and manifesting in various ways in the Muslim world. We’ve discussed the causes of anti-Blackness in history, but what about the causes of how it manifests today and what the solutions to these problems.