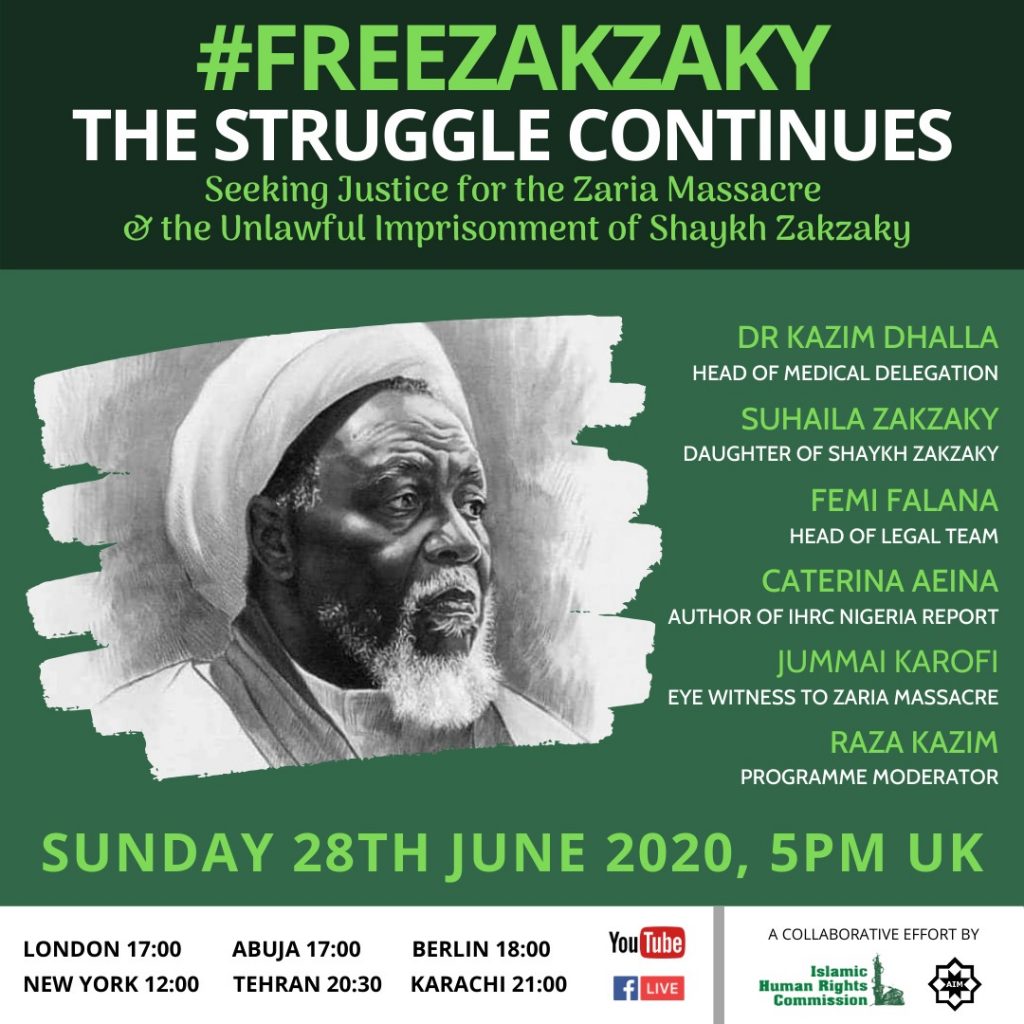 The Zaria Massacre took place in December 2015. Over a thousand were killed, and hundreds arrested. It is nearly 5 years and Sheikh Zakzaky and Muallima Zeenah remain imprisoned, the bodies of those killed remain in mass graves, and those responsible for the atrocity have not been held accountable.

IHRC held an online event on Sunday, 28 June with a range of guest speakers to discuss updates on the matter and what needs to be done to end the injustice. Online viewers included 1.5K on the IHRC Facebook page, almost 400 viewers on the IHRC YouTube channel, 1.6K views on the AIM Islam Facebook page and 1K on the AIM Islam YouTube channel. The objective of the event was to not only raise awareness of Sheikh Zakzaky’s illegal detention and the injustices enacted upon the Islamic Movement, but to also highlight that nothing is being done to improve the ongoing human rights abuses. An updated medical report has also been sent to the ICC to bolster the urgency of the condition of Sheikh Zakzaky, his wife Maullima Zeenah and other members of the Islamic Movement, and to demand intervention on denial of amnesty to Sheikh Zakzaky amidst the Coronavirus pandemic.

The event was chaired by Raza Kazim (IHRC); he opened with an introduction into Sheikh Zakzaky and the Islamic Movement of Nigeria’s activism, mentioning his slogan ‘Our greatest weapon is the truth’, a slogan which he has lived by and willing to sacrifice his life for. In a trip to London over a decade ago, Sheikh Zakzaky was speaking to an audience and he said, “My neck and our necks are not more important than the neck of Imam Hussein in trying to bring justice”.

First to speak was Jummai Karofi, an eyewitness to the Zaria Massacre. Jummai shared her sentiments as a follower of Sheikh Zakzaky and recounted the emotional ordeal. She said that during the attack by military personnel, they had nothing to defend themselves with and so they threw stones and chanted ‘Allah is the Greatest’.

Caterina Aeina, author of IHRC Nigeria Report, talked about some of the specifics of the issues in the case and her work lobbying the submission of reports through the International Criminal Court.

Caterina explained that in 2016, IHRC wrote to the ICC Prosecutor, urging to initiate all the legal action in accordance with the law, inasmuch as IHRC is of the view that the crimes committed by the Nigerian Army amounted to crimes against humanity, in relation to the attacks of 2015. These massive attacks were clearly against the supporters of the Islamic Movement, their properties, religious places and symbols, and eventually resulted in the killing of nearly 1000 civilians, and in the injuring of many others, including Islamic Movement leader Sheikh Ibrahim Zakzaky and his wife Zeenah, both shot, and in the demolition of their family home.

IHRC believes that such crimes fall within the jurisdiction of the court, in accordance to the provisions contained in articles 7.1 and 7.2 of the Rome Statute, whereby crimes against humanity means ‘any act when committed as part of a widespread or systematic attack directed against any civilian population’ or a distinct group of people and not on an individual basis, connected with each other by common characteristics, i.e. as is the case of IMN supporters and their political affiliation to the IMN.

IHRC believes also that the massacre of Zaria satisfies the ‘widespread and systematic element’ as requested by law, in terms of magnitude of the attacks and the geographical spread, and, as established by the International Criminal Court, in terms of a large-scale or continuous commission of crimes within the context of a political project.

As for the admissibility, (article 17(1)(a), IHRC believes that this apply inasmuch as the proceedings presumably could not be conducted fairly and with impartiality, or in a manner which is consistent with the intention of bringing the persons concerned to justice. Quite the opposite, the army officials’ version linked the attack to a traffic incident aimed at assassinating the army chief of staff Lieutenant General Tukur Buratai, whose convoy was passing through the area. This is a clear attempt to cover-up all the crimes committed by the soldiers.

However, this version has been largely disproved by pictures of the attacks, which showed no roadblocks or traffic at the time of the attack. On the contrary, there is a large body of photographic and video evidence showing that:

a) soldiers were peacefully walking around Islamic Movement buildings without any fear for their safety;

b) they took up their positions before opening fire without any provocation by the Islamic Movement supporters;

c) Islamic Movement supporters were unarmed and did not engage in any violent activity, and the government has failed to provide any evidence to the contrary.

As to the follow-up, in 2017 the ICC produced the Report on Preliminary Examination Activities. Sadly, in the report, the ICC stated that: “members of the IMN were armed with batons, knives, and machetes and stopped the convoy of the Chief of Army Staff on a principal road in Zaria on 12 December 2015”.

In a letter, IHRC strongly objected to the comments and reminded the ICC chief prosecutor Fatou Bensouda that to repeat the government narrative was a grave mistake, especially when the report “fails to present the victims’ perspective, ignores all of the evidence except that presented by the government and unfairly presents the victims of the violence as the instigator of the violence”.

Recently, in 2019, IHRC welcomed the Report on Preliminary Examination Activities by the Prosecution Office of the International Criminal Court (ICC). Nonetheless, IHRC is of the view that in these five years little has been demanded from the Nigerian government by ICC and other leading international organizations.

As for our Recommendation,

An update of the 2016 report can be found here, which was published in 2020. The latest information includes an attack on a procession celebrating the birth of Fatema Zahra in Misau, Bauchi area that injured 15 people, and another attack on a ‘Free Zakzaky’ protest in Kaduna which lead to the death of one person. Both incidents occurred in February 2020.

Femi Falana, Head of Legal Team, human rights lawyer in Nigeria and representative for Sheikh Zakzaky, spoke about the illegal attacks on unarmed members of the Islamic Movement and detention of Sheikh Zakzaky without trial, as well as the steps that are being taken to free Sheikh Zakzaky. The Nigerian government are losing case after case and are finding fewer reasons to keep Sheikh Zakzaky and Muallima Zeenah imprisoned. There is evidence of political pressure and interference in the judicial process that is keeping them incarcerated.

Dr Kazim Dhalla, Head of Medical Delegation, went on a fact-finding mission with a few other doctors and Massoud Shadjareh (Chair of IHRC), to see Sheikh Zakzaky’s and Mallima Zeenah’s health condition and to determine what can be done. Dr Dhalla said that they witnessed the 3 forms of human existence in Sheikh Zakzaky: the spiritual, the mental and the physical side. The mental and spiritual picture of Sheikh Zakzaky was that he was in a composed state of mind, and he and his wife was fasting due to Sha’ban. Within two days, the doctors were able to perform a comprehensive assessment and it took two weeks to compile a comprehensive 35-page report. Dr Dhalla noted that in his many years in medical practice, he had not seen multiple and serious pathologies in one person, that of which required immediate medical attention. He listed some of the pathologies of Sheikh Zakzaky: ischemic heart disease, hypertensive heart disease, liver and kidney problems, abnormal thyroid profile, soft body injuries, heavy metal toxicity, blindness in the right eye and vision being rapidly lost in his left eye.

Muallima Zeenah was found to have severe osteoarthritis and she could hardly stand, sit or walk without pain. She also had hypertensive heart disease, stones in her gallbladder, thyroid issues, high cholesterol and heavy metal toxicity such as cadmium, lead and arsenic which are found in bullets. They both also had multiple gunshot injuries. She was in constant pain and unfortunately no treatment was working. They also saw classic symptoms of PTSD such as lack of sleep, poor appetite and anxiety.

Dr Dhalla discussed Sheikh Zakzaky’s treatment in India and commented on his and Muallima Zeenah’s current condition in an overcrowded prison, which exposes both of them to various diseases and viruses including COVID-19.

The last speaker was Suhaila Zakzaky, daughter of Sheikh Zakzaky. She shared that one of the most surprising aspects during the December 2015 attacks, was that nobody imagined that soldiers would come to people’s homes to kill them and as they continued to shoot, family members and followers of the Islamic Movement did not have a full understand of what was happening. She recounted that the soliders did not pick and choose who to kill, rather they shot anybody that moved, infant or elderly. Suhaila spoke about the nature of the current government’s movement to imprison prominent individuals that speak out against the regime. She noted that their aggression in order to silence a way of thinking makes them stronger in their beliefs.

Currently, IHRC are asking asks campaigners to continue demanding that the Nigerian authorities release Sheikh El-Zakzaky, Muallima Zeenah and all those detained. On April 9, Buhari pardoned 2500 prisoners from Nigeria’s prisons. The pardon includes prisoners aged over 60 and those suffering from severe health conditions. However, this pardon did not include Sheikh Zakzaky and his wife Muallima Zeenah, who are both over 60 and have severe health conditions. Their continued illegal detention in Kaduna State prison poses a high risk to their health especially in the current COVID19 outbreak and hence, this is a policy that needs to be implemented quickly in Nigeria.

IHRC are also running a qurbani campaign for the families of many Islamic Movement supporters killed or injured are now unable to provide for themselves and are reliant on charitable donations for their essential needs. As well as the Uighur and Rohingya refugees who have been forced to flee their homelands to find sanctuary in Turkey and Bangladesh/Malaysia respectively, the meat distribution will take place in Nigeria.

Keep up to date on the movement via the Nigeria Digest which is updated every month.