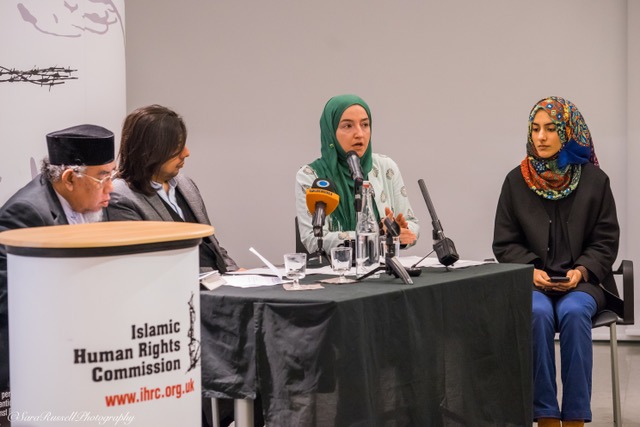 On Sunday, 15 January 2017 Islamic Human Rights Commission held their annual Genocide Memorial Day conference for the 7th year running since its inception in 2010. This year’s theme was “Lessons from the Cultural Genocide of Muslims and Jews in Europe”. A parallel event also took place in Brussels on the same day.

Held at the P21 Gallery, the event was attended by a number of activists and academics as well as those who were simply curious to learn more about the topic of genocide. The conference was opened with recitation from the Quran followed by English translation.

Raza Kazim, Head of Campaigns at IHRC, provided an opening statement where he emphasised the importance of challenging the narrative that some victims matter more than others dependant on their background. Also he mentioned that genocide doesn’t happen in a vacuum and left us with an open question: What is the environment that it occurs in?

Chaired by Nazim Ali, the first panel featured Dr Rebecca Masterton and Sheikh Azmi Hamid of Malaysia. Rebecca Masterton, is a British Islamic scholar, educator, public speaker, academic and author of several academic articles. She is also the director and tutor at Online Shia Studies. She made a fascinating contribution as she discussed the history of the expulsion of Jews and Muslims from Spain; including how the education system teaches this period of history, and how this miseducation impacts the European culture we live in today. She also made it clear that Europe is blind to its history and needs to be decolonised.

Following Dr Masterton, Sheikh Mohammad Azmi bin Abdul Hamid of Malaysia spoke of what is currently happening to the minority Rohingya population in Myanmar, suggesting that there is strong evidence for genocide. Massacres in Myanmar are being deliberately orchestrated and hidden from the international community. However, people are not just being killed – everything relating to the community is being erased as well. Stating the severe decrease in population figures was a sombre and frightening wake up call for the audience.

Narjis Khan then performed a rendition of her moving poem ‘Red blood spills’ which mentions the various interventionist wars taking place across the globe on behalf of the likes of the USA and the UK. The winners of the annual poetry competition for children ages 11-18 were then announced. Anisha Mehta with ‘Stand By’ and Tarzina Khatun with ‘Ship 1971’ were the winners of the first prize. They were awarded with an all-expenses paid trip to Bosnia. Second prize was jointly awarded to Ifrah Bukhari for ‘The Subhuman’ and Shukria Rezaei for ‘My Hazara People’. They each received a £50 IHRC Bookshop voucher. Finally, third prize was awarded to Luqman Reza for his poem ‘One Dimension.

The final speaker of the day was Ramon Grosfoguel, a professor in the Department of Ethnic Studies at the University of California at Berkeley. He spoke about the links between the rise of Islamophobia and genocide. He explicitly addressed how genocide is not just killing humans but destruction and appropriation of knowledge i.e an epistemicide.

Lastly, a minute of silence was held in remembrance as the names and numbers of a various genocidal acts over the last two centuries were read aloud. This part of the event has become a regular feature but hearing it every year does not lessen the impact. The extent of cruelty humanity can achieve is laid bare for all to see. The attendees, as well as the speakers, participated in a one minute silence in order to commemorate the various genocides that have happened across the globe.

Raza Kazim, concluded the conference by thanking the attendees, volunteers and stating very clearly that it is necessary to have an event like Genocide Memorial Day in order to remember those who have been forgotten.