Event Report: How Covid is being used to destroy our NHS with Dr Ranjeet Brar and Dr Bob Gill

Home
Event Reports
Event Report: How Covid is being used to destroy our NHS with Dr Ranjeet Brar and Dr Bob Gill 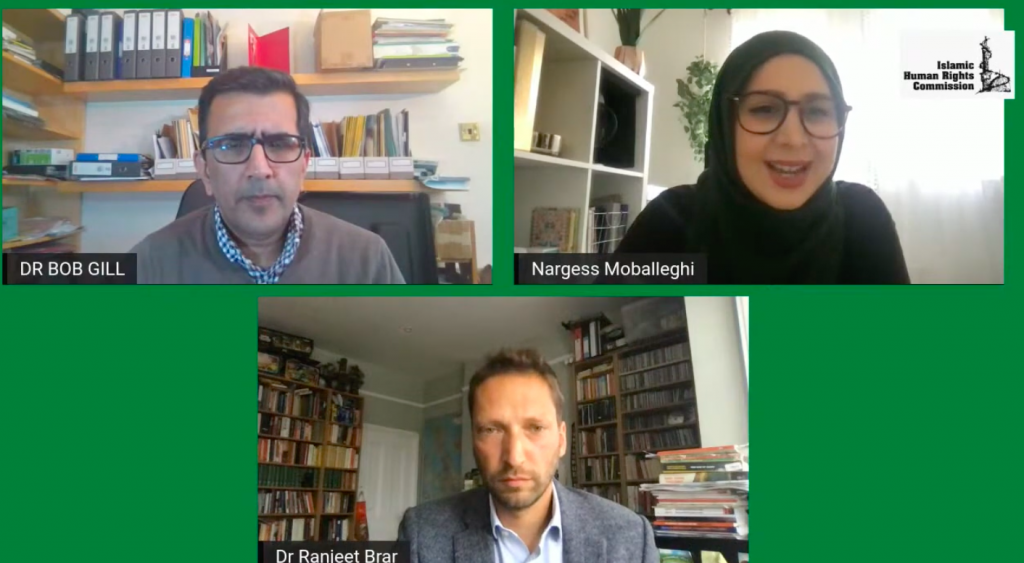 On 20 May 2021, IHRC hosted a discussion with Dr Ranjeet Brar (vascular surgeon and medic on the MOATS George Galloway weekly show) and Dr Bob Gill (GP and producer of The Great NHS Heist documentary) about how the UK government are using the Coronavirus as an excuse to push for full privatisation of health care in this country. This event is hosted by Nargess Moballeghi.

Privitisation of NHS is nothing new but the UK government is attempting to push more reforms through a white paper that is being dubbed dangerous by doctors in the NHS. The fear is that this is going to further restructure the NHS into the corrupt American model of health insurance-based medicine. We already US companies have been rearranging the UK health system and changing it from a system designed to meet the needs of the population to one that maximises profit. There have been stories throughout the years of private companies taking over control of GP surgeries and NHS services throughout the country.

Read summaries of the conversation below.

We are just emerging from the depths of a pandemic and health and healthcare has been at the front of the political agenda, the news agenda and at the forefront of our minds and the way in which the NHS have been treated during that time, the amount of resources allocated or not allocated, the tens of billions that have been passed around the NHS to private companies to perform functions which should have been performed by the NHS, and as a result, the very poor way we have handled this pandemic overall, are a culmination of a long period of time, at least 40 years of policy.

During Margaret Thatcher’s government, there was a key change in policy towards the NHS. It was already becoming under resourced and in keeping with the ethos of the Thatcherite period, there was a question of how to open up this funding to the market, how to get all of this money which in the state in the form of our taxes which is being spent on our health, how can the private industry benefit from this. Oliver Letwin wrote a book called ‘Britain’s Biggest Enterprise: Ideas for Radical Reform of the NHS’; he came up with a plan of privatisation of the NHS and that plan has been followed since to [today] from successive administrations. They came up with the idea of an internal market, that there would be a purchase and provider split, so one group of clinicians would provide a service and a part of the NHS would provide a budget and buy from the other part. They were intent on making this a business transaction, not to make it more efficient. The amount of money spent on administration during that process in the introduction of the internal market has gone from around 2-3% of the national budget to around 15-20% of the national budget. As a result, a huge amount of state money is going to the private sector. Going along with that, they wanted to introduce a revolving door between management of big financial companies and the NHS. Again, allegedly we would benefit from the market and the business expertise; the system was supposed to provide healthcare from the cradle to the grave, free at the point of use to citizens which should be a non-profit undertaking, but what they’ve done is introduced a business ethos.

Along with that, it was very necessary to decrease the overall power of the clinicians, to side-line them and allow the necessary changes for privatisation. These were all Tory policies of PFI pr PPP, Public Finance Initiative or Public Private Partnership; what that meant was when the hospitals were starved of resources and needed some capital input to improve their facilities, the vast majority of it came under Blaire, Dobson, Milburn, Patricia Hewitt, and the like, so during those years. Money was raised from essentially venture capitalists and bankers – around £12 billion was raised in this way from the City of London and Wall Street, in order to build new hospitals. Old hospitals were sold off for flats and new premises were created entirely. In that process, contracts were given out where the repayment was eight times the value of the initial capital input, and at the end of those mortgages, the hospitals are not owed by the state/NHS, they belong still to the capital consortium. This has been a massive drain on resources which puts the whole of the NHS in deep debt, and on the basis of that, restructuring the NHS so that all or parts of it must become trusts so run on business principles. One of the targets they will be measured on are financial and fiscal principles, and as they are in debt, they have to make cuts, and cuts means less healthcare delivered. Despite the increase in the NHS budget year after year, a decreasing share of that actually goes into front-line care and an increasing share on capital costs, repayment of PFI, drug costs, etc.

On the pandemic, Dr Brar discussed Exercise Cygnus in 2016 under the leadership of Jeremy Hunt, which looked at the ability of the NHS to respond to a pandemic situation. What was clear from that exercise is that there was an under capacity of beds, under capacity in ICU, and not enough PPE stockpiled to deal with such a situation adequately. It was included in their report that in the event of such a pandemic, the NHS would fall over. This decrease in capacity of the NHS had been deliberately as part of the downgrading and outsourcing of the NHS. Our bed capacity has gone from around 240,000 beds nationally some 30 years ago, currently to 130,000-140,000 beds, many of which are for day surgery or mental health, so the acute medical beds are now just 100,000 beds for the whole country.

To do anything about this meant to reverse what our ministers and government had been consciously doing, to head down the road of privatisation. This decrease in capacity is intentional. There are about 5 million citizens in Britain out of 66 million, who are waiting for a surgical operation or procedure – that is not including overall waiting lists to access care which is getting increasingly hard – and the answer of our government is to give yet more money to the private sector, suggesting the private sector will help us to get out of this situation of under-capacity. This under-capacity is not an accident or a result of the pandemic; it is the result of 30-40 years of policy directed at privatisation, heading us towards an insurance-based system.

As a GP, I am seeing on a daily basis, an NHS that is struggling, that is becoming harder to defend in its current state. The pandemic was an example of growth government and policy failure which will lead to mass avoidable death. The former chief medical officer, Sir David King, estimated that there were 100,000 preventable excess deaths in the last year (since the pandemic struck).

Initially the government ignored the threat, they didn’t trust anybody. Then there was a prolonged lockdown, during which time, rather than enforcing the public services, local authorities, and NHS structures that we know work well, they were handing out multi-billion-pound contracts to large, private profit-seeking corporations, like Serco, Deloitte, and Sitel. What has been the result? It has led to what the Public Accounts Committee found that it had no measurable impact on the progress of the pandemic. It should be an example of the gross failure of putting private, profit-seeking companies in charge of a public health system.

The government are using the chaos to push through and accelerate their long held intention to push us to the American system, which sends more than twice we do per head of population. Around 10% of their budget is sucked out by fraud and 30% of their budget is taken up in administration, shareholder profit, and chief executive pay-outs. That is a hugely expensive and a worse performing system that the government is copying. Clearly it is not being done on moral, ethical, economical or evidence-based grounds. It is an agent for private corporations to facilitate looting of our national assets.

That brings us to the white paper and the health bill. The lessons they have learnt is to normalise what we saw as disaster medicine; one element of that is to get doctors and nurses to work outside of their clinical competence and experience, and they see this as a positive outcome. If you don’t have well-trained staff, there is a greater risk to patient safety.

Dr Bob Gill explains how replicating the American system incentivises NHS employees to act against the patients’ interests. For example, as a GP, Dr Gill may be given a quota of referrals that he is allowed to make to stay within the budget. If he exceeds that budget quota, he will not be entitled to his bonus. This can have a negative effect on his behaviour as a GP.

In order to achieve these US-style changes, they need to break the connection between patients and their GP, and the pandemic has helped with that. GPs were ordered en masse to put up barriers to access; patients were not allowed ot see the GPs face to face. There may be a public health argument for that, but there are ways to mitigate that. The government saw this as an opportunity to erode the doctor-patient relationship.

Part of the reforms are to further replace doctors with non-doctors. The right to see the doctor which has been there since 1948, is being removed. Funding is allocated for these organisations of GPS not to hire more doctors when a doctor retires or leaves, but to hire non-doctor substitutes. This is dangerous because the less qualified person you see as your first port of call, the greater the blind spot and the greater the risk of misdiagnosis and harm for the patient.

Arrangements are also being made to block access to the A&E. so, if you have an accident outside a local A&E department and you hobble in via the entrance, you will be turned away unless you have rung 111 first.

In summary, the government are learning all the wrong lessons from the pandemic, despite all the evidence that the private sector has failed and squandered billions. It means my patients are not getting treated well in hospital; they are often poorly treated, misdiagnosed on an increasing frequency, they are waiting longer for surgery which means they are unable to work, they are in pain for longer, they require more medication, they become economically inactive which has a ripple effect on the rest of the family and the economy.

We must not keep framing this as a gov just making a mistake. Our govts over consecutive decades have acted against the interest of the population to replicate a dysfunctional, dystopian, twice as expensive patient-harming system.

Dr Brar and Dr Gill responded to questions from the audience, including how to save the NHS with the Tory government and many Labour MPs that are pro-privatisation, how campaigners across the country join to oppose privatisation, what the impact of the gap is between not having a fully functioning NHS nor a functioning private-insurance based health service, and more.