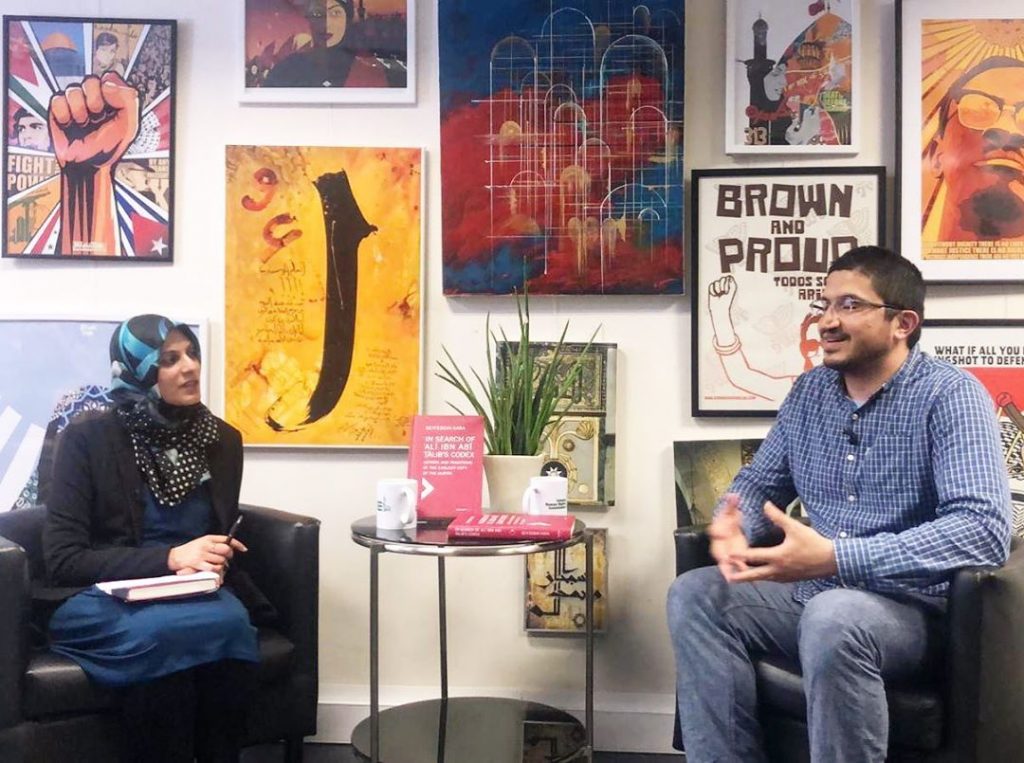 Chaired by lecturer in Arabic language and grammar, Qur’anic Sciences and Hadith Studies, Nazmina Dhanji discussed the historicity of the Qur’anic text with author and academic, Seyfeddin Kara. You can buy the book here, read a full event below, and or watch the video of the event on this page.

The discussion began about the traditional Muslim view of the textual history of the Qur’an and where Western academia has stood on the issue of the historicity of the Quran. Professor Kara said: ” The traditional views of the Qur’an claims that the Qur’an was collected right after the death of the Prophet (pbuh) by the first caliph Abu Bakr. He ordered Zayd ibn Thabit to produce a personal copy of the Qur’an and then later on ‘Uthman, the third caliph, collected the Qur’an which became the official Qur’an. Professor Kara said: “This is the Qu’ran that we have now, there have been some improvements to the text so that people can read it and understand it unanimously. This is the traditional Muslim account. We have the academic account of the text of the history of the Qur’an; one is the revisionist view of the west, which gradually evolved and argued that the Qur’an was not a product of Muslims and it was actually organically grown as a result of Judeo-Christian heritage in Arabia over 200 years – the idea of John Wansbrough. It was compared with the Bible… and these views were was dominant for 20 years but then lost its significance because of alternatives theories and methodologies.”

Professor Kara said during his research he found that there is a lot of complaining of the scarcity of historical data and that on the contrary, there is massive historical data in the Shia tradition, “which has been ignored completely because the whole debate is based around Sunni traditions, Sunni sources and Sunni understandings of the Qur’an. So my aim was to break this barrier regarding the ignoring of the Shia sources. My main contribution was to make the Shia view available. Some scholars will take it into consideration in their research but many probably would not as there are many problems and biases in academia. The whole reason Shia traditions are being ignored is because they do not trust it.”

Professor Kara and Nazmina Dhanji discussed the Sunni sources and Shi’i accounts in Sunni sources used in Professor Kara’s research. He said: “The findings are mostly based on Sunni traditions. The accounts earlier than the Sunni traditions are not significantly early, around 10-15 years. It is not just scholarly endeavor, there are political aspects and because of that it has not found it’s way into canonical Sunni works. The ones you have mentioned – Abdulrazzaq’s musanaf – are earlier than those canonical collections; we probably find them in the 2nd century Sunni works and not 3rd century Sunni works probably because of the political pressure and it is crystallising the Sunni orthodoxy.”

“Some of the earlier Sunni works mention that Ali ibn Abi Talib, just after the death of the Prophet (pbuh) remained in his house for a considerable period, probably around 6 months and collected the first copy of the Qur’an, and of course did not pledge allegiance to Abu Bakr during this time because he uses the excuse that he is busy collecting the Qur’an. He probably kept outside of this political ground because some people wanted to take advantage of him and create discord. We know Ali ibn Abi Talib was very cautious about not creating discord within the ummah and so he kept quiet. And this project was a very good project to justify his quietness. He took the Quran to the Muslims and they did not accept it.”

Nazmina asks, “In light of these political events, I thought it was almost impossible to sidestep everything that was happening after the death of the Prophet (pbuh) as a backdrop at the same time as this collection of the Qur’an so it would have been easy to make it sectarian. But in actual fact you bring it together and you focus on the unifying factor between the Shi’i and Sunni view, that actually what we can agree on is that there is definitely a unifying codex in existence very soon after the Prophet’s death, using a scientific method. The identity of the first compiler is what remains – how important is it to ascertain that?”

Watch the event here or read a full report below.

Professor Kara responded: “The debate is when the Qur’an was collected, not who collected it. We know that the time period does not change between Sunni and Shia, the Qur’an was collected soon after the Prophet (pbuh) but also we know it was not a matter of dispute especially Ali ibn Abi Talib’s copy. Bukhari mentions when Ali Abi ibn Talib compiled it, he took it to the mosque of the Prophet (pbuh) and presents it to people, but they reject it. Later, he himself becomes a caliph and he does not impose his own copy of the Qur’an because it is the same Qur’an more or less, the order of the chapters are different. He accepts Uthman’s Quran, just to keep unity among the Muslims. It is not a sectarian book, Muslims have always agreed on the text of the Quran, despite other issues there has not been disagreements on the integrity of the Qur’an.