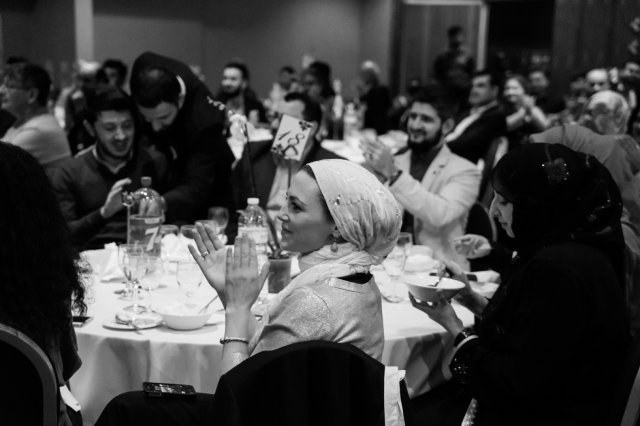 On 7 March 2015, the Islamophobia awards – our annual fundraising event to acknowledge the worst Islamophobes of the past year through satire – returned. Centred on the growing prejudice and racism occurring in the media and throughout society, the evening featured a spoof ‘awards ceremony’, a three-course meal and a performance from the award-winning comedian Aamer Rahman.

Open to the public, people were given the chance to nominate those they felt were most deserving in four different categories. We put the nominations together in the form of separate polls and asked the public to vote for whom they would most like to win the auspicious prizes. This year’s categories were: UK, International, News Media and Book/Movie/TV Series.

The evening began with the serving of our three-course meal and introductory remarks were made by Raza Kazim. Attended by illustrious members of the Muslim community as well as other local activists, academics, celebrities and members of the press – the evening provided a chance for everyone to enjoy themselves with great conversation and great food.

As desert was being served and people helped themselves to tea and coffee, the proceedings began. Our hosts for the night – Lena Mohamed and Nazim Ali – entertained everyone with their opening; a telling precursor for the rest of the night. The first category introduced was ‘UK’ where Maajid Nawaz battled through to receive the coveted award of being labeled the most Islamophobic in the entire kingdom. As would be the case with all the winners on the night, a humorous tune dedicated to Nawaz followed the announcement of his win.

The accolade for most Islamophobic in the ‘News Media’ category went to FOX News. Their nomination reel saw a clip of presenter Jeanine Pirro stating the ‘need to kill them’ – the ‘them’ in this case being ‘the radical Muslim terrorists hell bent on killing [Americans].’ Despite worthy competition from the likes of Katie Hopkins and Douglas Murray, FOX News was the overwhelming winner.

The winner in the ‘Book/Movie/TV Series’ category was the US box-office hit American Sniper. Despite a big budget, a renowned director and a famous cast of actors; the movie has also gained notoriety because of a scene that included a blatantly fake baby doll. Our hosts pointed out this egregious offence when listing the nominees but in truth it was minor in comparison to the movie’s most detrimental consequences (i.e: inciting hatred and violence towards Arabs and Muslims everywhere.)

The publication Charlie Hebdo was the final winner in the last of the four categories. The ‘International’ category saw the likes of one of last year’s winners: Barack Obama as well as the well-known talk show host Bill Maher (who was a very close runner-up!) and the Israeli Prime Minister Benjamin Netanyahu. Charlie Hebdo is perceived by many to be Islamophobic and racist when it comes to many issues. The overall award of the evening – for the worst Islamophobe of the year – was given to the esteemed Theresa May for her array of counter-terrorism policies which have demonised and isolated Muslims. Hamja Ahsan was in attendance and he spoke briefly once the award was announced as he has first hand experience of the effects of the current Home Secretary.

While the spoof ‘awards ceremony’ was the centre of the evening, time was also taken to honour those who have battled against Islamophobia. These winners included Imam Achmad Cassiem in South Africa, Dr Abdel-Rahmene Azzouzi in France, the author Arun Kundnani for his recent work ‘The Muslims are Coming!’ and the community of Cold Lake in Canada for their response to the vandalism of a local mosque. While we were not able to reach any of those personally involved with ‘love bombing’ the mosque in Canada; we were able to show the audience recorded messages of thanks from the rest of the winners. Imam Cassiem spoke of everyone needing to find their inner strength and their inner truth – in doing so we will all be more effective in the fight for justice. Dr Azzouzi – who wrote an incriminating letter on the Islamophobic climate in France – also delivered an indictment on the state of his own country while simultaneously expressing his gratitude for such an award. Arun Kundnani recognised the work of the activists he has collaborated with over the years, mentioning that a few were probably sitting in the audience as well.

The Islamophobia Awards serves many purposes but it is also IHRC’s annual fundraiser and we were very pleased by the kind generosity of those in attendance who so willingly donated to further our cause. Professional fundraiser Na’eem Raza spoke at length about IHRC’s causes – the Hate Crime Project which has produced statistics on anti-Muslim discrimination in the UK, USA, Canada and France. He encouraged the audience to contribute to the next project which could see development in the likes of Germany and Portugal. Thankfully, in this regard especially, we were successful. We were also happy with the outcome of the silent auction that was held – featuring artwork from Mohammed Hamza and Siddiqa Juma.

One of the main draws of the evening was the promise of a performance by the award-winning comedian Aamer Rahman. With appearances at the Sydney Comedy Festival, Adelaide Fringe and the famous Edinburgh Fringe Festival; Aamer is a well-travelled performer and his acerbic wit meant he was the perfect addition to the evening of revue. With lines both hilarious and critical of many systems of power, Aamer fit seamlessly into an evening that was meant to entertain and educate. The Islamophobia Awards provide a chance for light-hearted humour while still allowing reflection upon serious issues – this theme paralleled well with Aamer’s own comedy and the audience was in uproarious laughter when he was on stage.

We were also treated to a recitation from spoken word performer Hodan Yusuf. The writer and poet moved the audience with her compelling piece which bought home the fact that while this was an evening of comedy, these issues must be taken seriously as their effects are devastating. This point was made further by one of our hosts. Lena Mohamed began closing proceedings with a chilling speech. It referenced the horrendous Chapel Hill Shootings and journalists like Cathy Newman who freely mentioned how unfortunate it was that there wasn’t more sectarian violence between Muslims. She also spoke specifically about the Chairman of the Charity Commission: William Shawcross. Ninety-five percent of Muslim organisations are charities and statistics show they are disproportionately targeted by the Commission. New measures give greater powers to the Commission to target charities by closing bank accounts, seizing computers, being able to monitor them for extended periods of time, and also shutting them down. All these are elements of a racist process and we must acknowledge it as such.

On that sombre note, IHRC Chair Massoud Shadjareh delivered the closing remarks. A hugely successful evening came to a close with guests feeling well-fed and well-entertained.