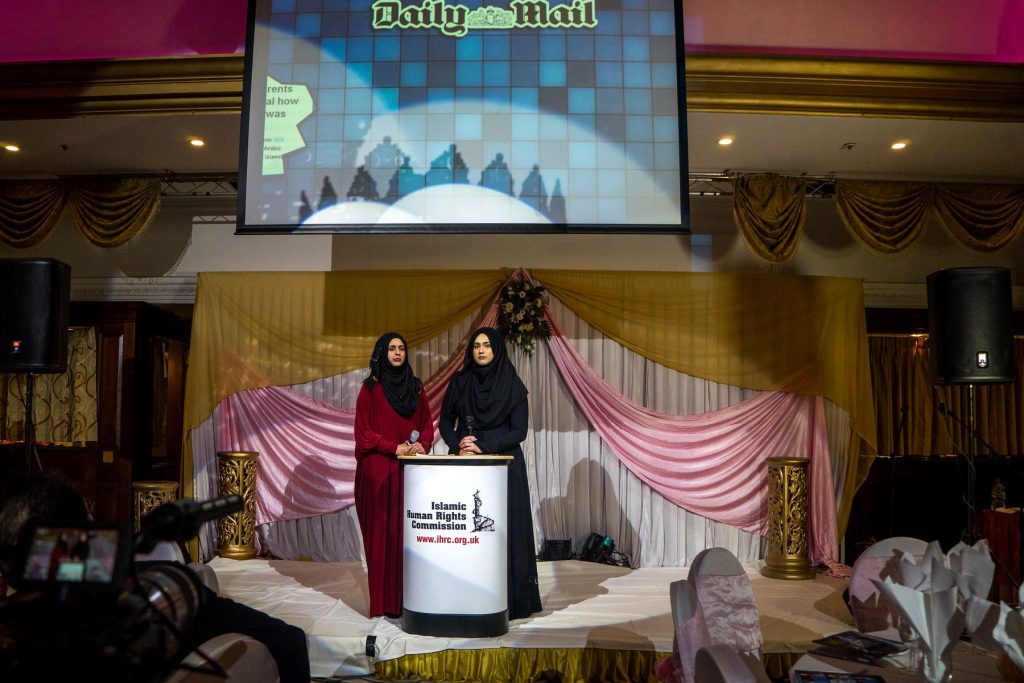 Watch the event below or read a full report underneath and see pictures of the event.

IHRC successfully hosted the Islamophobia Awards 2016 on Saturday, 5 March with over 300 guests in attendance. The glamorous event was well-attended by politicians, religious figures and notable members of the Muslim community. A chance to mock Islamophobic personalities and institutions; the event provides the Muslim community with a opportunity to laugh and engage in some humour while still appreciating the seriousness of the issue.

The winners of the spoof ceremony were also revealed after votes were cast by the public [for the full list of winners please see below.] The four categories this year were: UK, International, Book/Movie/TV and News Media.

The evening began with a Quran recitation and opening remarks from IHRC’s Raza Kazim. Guests were treated to goodie bags with items provided by our generous sponsors: cards from Muslim By Design; toiletries from Tamese&Jackson, cards from Muslim By Design, sweets from Halal Sweet Co and more. The first of a three-course meal was also served so guests began dining while the onstage entertainment continued.

The spoof ceremony continued in the vein of the Oscars (except we’re mocking the racists and not applauding them in our case) and the four nominees in each category were revealed accompanied by short clips showcasing their bad demeanour. In UK winner David Cameron’s case – he was memorialised discussing Muslim women (who he has also termed “traditionally submissive.) He was announced the winner and it was promised that a ‘Moonpig’ card would be sent to him.

The Book/Movie/TV category saw the American television series ‘Homeland’ take home the Islamophobia crown. Their win was also recognised by graffiti artists Heba Amin, Caram Kapp and Don Karl. The three artists had previously worked on the set of Homeland where they were hired to make the landscape look more authentic. But instead – as they were all severe critics of the show – Heba, Caram and Don painted slogans like ‘Homeland is racist’ that would later make it onto the screens of millions of viewers across the world. We were thankful to have them involved.

The News Media category featured the likes of The Daily Mail and Cathy Newman but it was Kay Burley who came up trumps after dismissing a claim that she was being Islamophobic as “nonsense.” The International category saw a shortlist of nominees that spanned the globe from the Netherlands to Tajikistan. Charlie Hebdo took home this award for a second consecutive year after publishing a despicable cartoon featuring a deceased refugee baby.

While also enjoying the spoof awards, the audience was pleased with added remembrance of those individuals and organisations who have helped with the fight against Islamophobia. Malia Bouattia was in attendance from NUS Black Students to accept their award onstage – she said a few words about working to eradicate harmful UK counter-terror policies like the PREVENT strategy. Others who were honoured for their work combating Islamophobia included Dr Larycia Hawkins, the German group ‘Women In Exile’ and journalist Jon Snow.

Comedian Nabil Abdulrashid was also a big feature on the night and the audience thoroughly enjoyed his humour which referenced politics, race and religion. Singer and spoken word artist Melissa Melodee also performed a selection of thoughtful pieces that moved the audience.

Though the Islamophobia Awards present a chance for a night of laughter and escapism; it is also IHRC’s annual fundraising event. Numerous videos were screened to the audience which showcased the organisation’s work – this included highlights of IHRC Legal, Genocide Memorial Day, IHRC’s Hate Crime Project and more. Many guests on the night were happy to donate towards IHRC’s cause and the research that IHRC continues on a daily basis. The organisation is at the forefront in the production of research on anti-Muslim hate crime and has done work on the UK, Canada, France and the USA. We were also happy with the outcome of the silent auction that was held – featuring artwork from Mohammed Hamza and Siddiqa Juma.

It was important at the end of the evening to recognise the importance of working together to fight for justice. The overall winner on the night was US presidential candidate Donald Trump. The scary reality is just how real the possibility of him becoming president is – despite his very public announcement and ensuing campaign to stop Muslims from entering the US. The reminder of the execution-style murders of three Sudanese men in the USA – Mohamedtaha Omar, Adam Mekki, Muhannad Tairab – was a sobering end to the evening.

– 13 Hours: the Secret Soldiers of Benghazi

–It IS About Islam: Exposing the Truth About ISIS, Al Qaeda, Iran, and the Caliphate by Glenn Beck