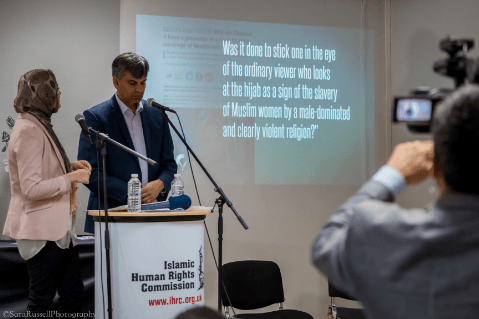 IHRC successfully hosted the 2017 Islamophobia Awards on Sunday, 27 November. The event was also a chance to commemorate 20 years since Islamic Human Rights Commission was founded and fundraise money for IHRC Trust’s charitable works.

Foremost, the event is a satirical awards ceremony where we can poke fun at those who have been Islamophobic and hateful towards Muslims. As in previous years, the four categories were: UK, International, Book/Movie/TV and News Media. Watch the video here or read a report and see the photos and photo gallery below.

The evening began with a beautiful Quran recitation before moving on to the opening skit. Hosts Raza Kazim and Camilia Shambayati-Ghajar mimicked the roles of OFSTED inspector and young Muslim student. The skit recalled OFSTED’s recent questioning for young Muslim students who wore the hijab. In this case the ‘OFSTED inspector’ allowed the ‘student’ to get away with being rude, chewing gum and having a terrible understanding of maths however he drew the line at her wearing the hijab. Though the skit was intended as satire; the hosts questioned how much it really differed from the reality facing many young Muslim schoolgirls who willingly wear such attire.

The first category of the evening was UK and the four nominees were revealed with clips illustrating just some of their misdeeds over the past year. Nominees in this category were Nigel Farage, OFSTED, Tommy Robinson and Maajid Nawaz. OFSTED emerged victorious in this case though competition had been fierce.

Throughout the evening ‘positive awards’ were also given out to those who had struggled and fought against Islamophobia – particularly in the most trying of conditions. The first award of this kind on the night was granted to Roshan Salih Muhammad – long-time journalist and founder of the major Muslim news website 5Pillars. He was not able to be in attendance but his ex-colleague Nargess Moballeghi accepted the award on his behalf and spoke well of the great achievement he had made to journalism in his efforts to showcase institutional and Western bias.

There was other entertainment on offer too as guests were treated to a special performance by acclaimed spoken word artist Mizan the Poet. His poem for the evening focused on the pernicious PREVENT strategy. He powerfully detailed the ways the programme had left Muslims feeling isolated and targeted.

‘News Media’ was the next category to be spoofed with the nominee list featuring the Daily Mail, Kelvin Mackenzie, FOX News and Breitbart. All were deserving winners and the hosts went to great pains to point out how out of touch the media has been – especially in the last two years. In the end, FOX News were the triumphant winners as their nomination clip revealed a presenter questioning whether it was crazy to be unsurprised by the Finsbury Park Mosque attack that had taken place earlier in the year. To celebrate, the song ‘American Idiot’ was played over a selection of edited moments from the news channel.

Malaysian organisation MAPIM and activist Shaykh Azmi were the next to be recognised with a ‘positive award.’ Working with the organisation, Shaykh Azmi had done a tremendous amount for the persecuted Rohingya community of Myanmar. Earlier in the year the organisation arranged a flotilla which travelled to Myanmar and aimed to provide food and supplies. MAPIM is also helping the Rohingya who have fled to Bangladesh – supporting them with education, food and more. Ahmed Uddin – who recently travelled to Bangladesh himself – accepted the award on Shaykh Azmi’s behalf and praised his work.

Before the next spoof category was announced; the hosts introduced nasheed artist Khaleel Muhammad who beautifully serenaded the audience. Performance complete and the audience left enthralled; the nominees in the ‘International’ category were revealed: Aung San Suu Kyi, Donald Trump, Milo Yiannopoulos and Geert Wilders. The hosts mocked the fact that Aung San Suu Kyi was a Nobel Peace Prize recipient despite her silence and lack of response in the face of the ethnic cleansing of the Rohingya people in Myanmar. It was thus no surprise when it was announced that she had won and was recognised as the International Islamophobe of the Year.

Following this award, the evening shifted to focus on fundraising for IHRC Trust. Donation forms were handed out to guests and they were encouraged to fill them out by the hosts on stage. IHRC Trust’s charitable works include IHRC Legal, IHRC Advocacy, Genocide Memorial Day and the Hate Crime Project which produces vital reports surveying a variety of countries on how hate crime and discrimination affects Muslims. Arzu Merali – Head of Research at IHRC – spoke about the hate crime project; the reports produced and the importance of speaking out in a climate where you feel like you have to be silent. It was a speech of gravitas in a night of levity but it was important for the audience to understand the value of the organisation’s work. Head of IHRC Legal and Advocacy – Abed Choudhury also spoke about the work of his department and the vital services provided to Muslims and others who have been discriminated against as well as those suffering with employment and immigration issues. Abed Choudhury was also joined on the stage by Ahmed Uddin as the two had undertaken a recent trip to Bangladesh where they documented the horrific crisis of the Rohingya. IHRC Trust has been helping to raise aid and money for those suffering in the region.

After the fundraising for the evening was complete (with viewers watching via IHRC.TV informed that they could donate to IHRC Trust online); it was time for the ‘Book/Movie/TV’ category. This year featured three movies and one television series: London Has Fallen, Patriots Day, American Assassin and Homeland. Camilia commented that the violence depicted in all the movies made it clear that audiences were being sold violence towards Muslims as acceptable. However, it turned out to be a consecutive win for American tv series Homeland. They were justly awarded as the song ‘War’ played over clips from the show.

Our final ‘positive award’ recipient of the evening was anti-racism campaigner Maz Saleem. Maz first became involved in the cause when her father was murdered as a result of a hate crime. Since then she has tirelessly campaigned to shed let on the danger of far right extremism. She was welcomed on stage where she gave a very moving speech on the journey she has been on and the struggles she has faced.

Not to forget, this was also an evening to celebrate 20 Years of IHRC. The organisation was founded in 1997 and since then it has grown from strength to strength. It has consultative status with the United Nations; had report-launches at the House of Lords and held demonstrations with thousands of people. To commemorate the fact, a video featuring congratulations from IHRC supporters across the world was played.

The final award of the evening was the prestigious ‘Overall Islamophobe of the Year’ prize. While there was competition from all avenues, there could only ever be one winner after a blistering year of bigotry and hatred. The Overall Islamophobe of the Year 2017 was awarded to Donald Trump! He was awarded the same accolade in 2016 as well. A hilarious spoof video was played in which Donald Trump himself can be heard ‘thanking’ the Islamic Human Rights Commission.

It was a successful evening that allowed for light hearted laughter and comedy – enjoyed by all. It is of course important to also remember the seriousness of the Islamophobia phenomenon and that we must always be working towards dismantling structural inequalities. But even Muslims are allowed a night off for a bit of satirical fun!

It’s open season on Muslims, and Trumps tweets prove it

‘Proud’ of Killing the Most Palestinians: How Israeli Officials Get Away With Boasting Abuses

Trump voted Islamophobe of the Year

See a full photo gallery below.