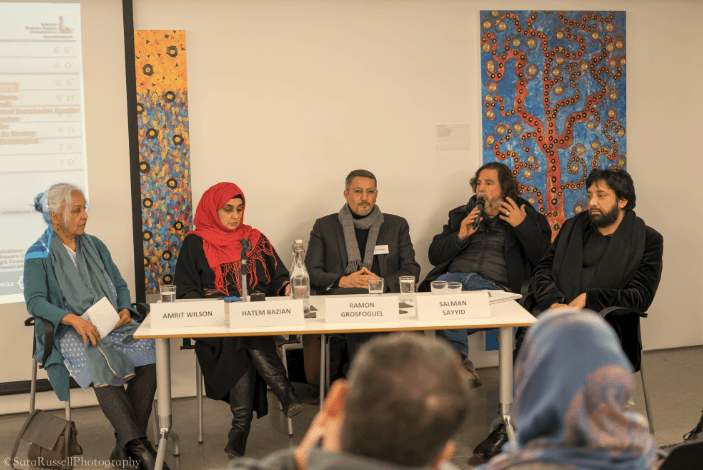 On Sunday 10th December, the 2017 Islamophobia conference began with a swarm of snowflakes, an exciting start to IHRC’s fourth annual conference entitled The Rise of Nativism. Co-organised with Scotland Against Criminalising Communities, the London event was held at the wonderful P21 Gallery whilst the Scottish conference was held in Edinburgh on Friday 9th December.

Watch the London speeches here, or below, or read the rest of the report underneath, and see a full gallery of pictures at the end.

The first panel, speakers discussed minority rights in the age of nativism. Chaired by Nargess Moballeghi First to speak was Arzu Merali, the Head of Research at IHRC and co-author of Environment of Hate: The new Normal for Muslims in the UK. Arzu discussed the problems we’re facing with the rise of nativism in the nation state, such as that people are in denial about the presence of far-right street organisations in the UK. Arzu mentioned the intersections of Islamophobia or anti-blackness or austerity can be campaigned against all at once and that rather than internalising it, we need to critique it. 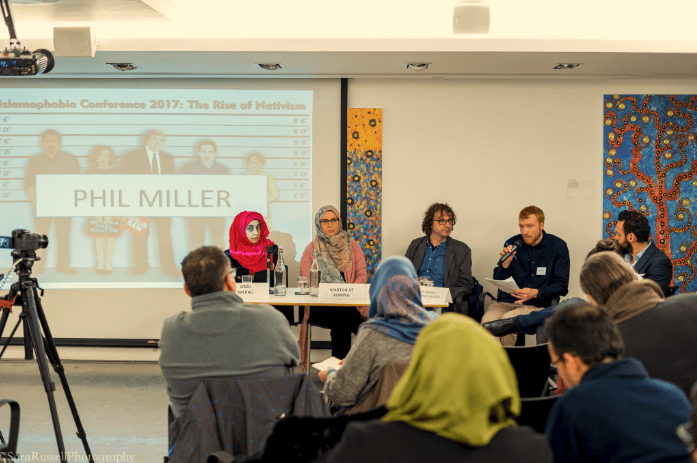 Next to speak was Dr Luis Hernandez Manuel Aguilar, a research officer for IHRC based in Germany. Luis talked about the German Islam Conference, meeting that have been taking place since 2006 to discuss the integration of Muslims in Germany. Luis said the state forces individuals to prove they belong through integration of an imagined idealised state. 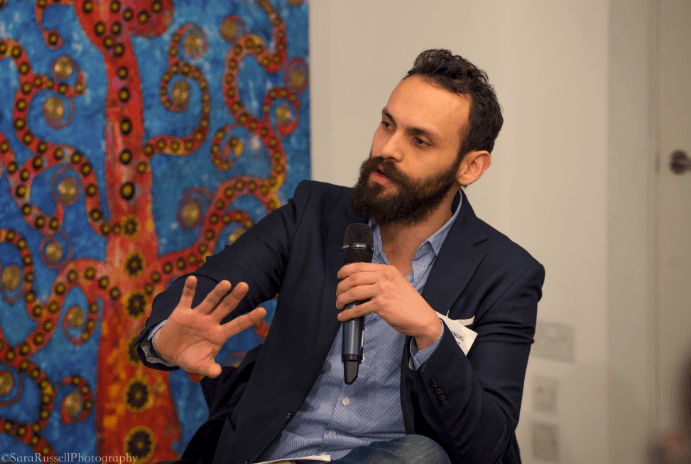 Phil Miller, a freelance journalist, scrutinised Theresa May’s deplorable record as Home Secretary and the nefarious standards of immigration centres, which he described as akin to prisons despite no one inside being charged with a crime. He retold horror stories of immigration and detention centres and the death of so many innocent people who continue to suffer degrading and inhumane treatment. Phil mentioned that this year sadly marked the highest number of deaths in detention, many by suicide. 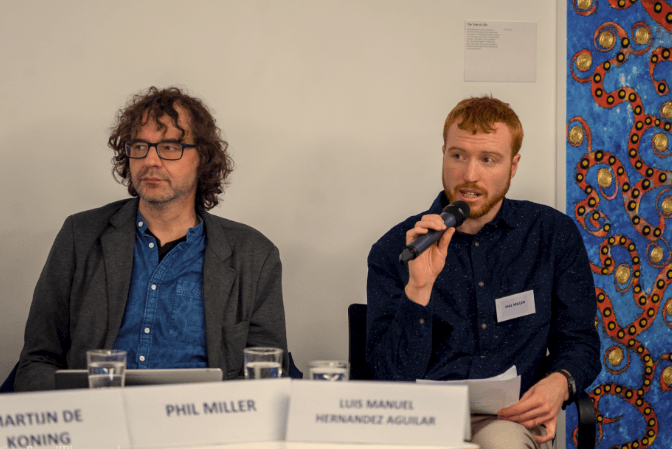 From the Netherlands, Martijn de Koning, a teacher at the Radboud University Nijmegen and a postdoc at the University of Amsterdam, discussed how nativism says that the state should only be inhabited and ruled by members that believe they are from the ‘real’ nation. In the Netherlands, the call to prayer is no longer seen as integrating and embracing Dutch freedom – but as a challenge to the judeo-christian order. Muslims are only allowed to speak about ‘Muslim issues’ – you don’t see Muslim commenting on Brexit. 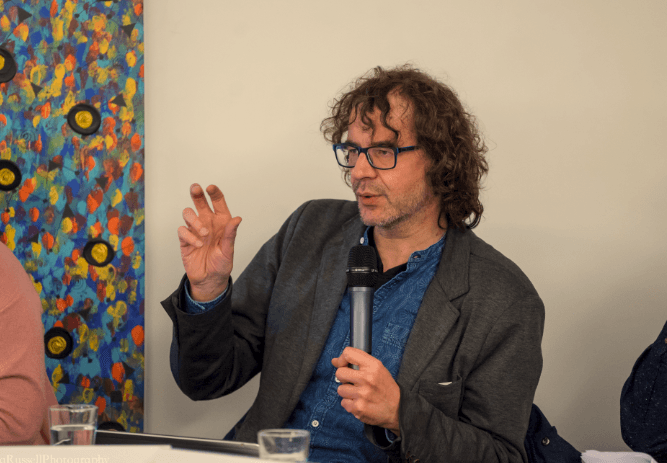 After a delicious lunch prepared by the staff at the P21 Gallery, the second panel commenced. Professor Hatem Bazian, co-founder of Zaytuna College and lecturer at the University of California, discussed the USA and the civil rights movement, the prison complex and military expenditure. Professor Hatem said the fear of Muslims is used as a foil by the government to not address the real issues of a society – the rising cost of living, the disparity of wealth between the rich and poor etc. Islamophobia has been monetised into an electoral issue. When you stoke fears it can be used as a tool to get people to vote against their own interests.

Next to speak was Ramon Grosofguel, a professor at the University of California. Ramon explained how Islamophobia produces a docile population that can be controlled and manipulated. 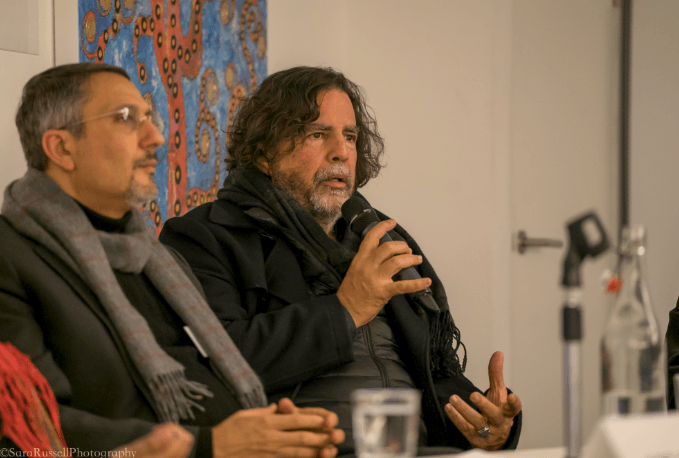 Amrit Wilson, a writer and activist and member of South Asia Solidarity Group, talked about Islamophobia and nativism in India. In India Muslims are not immigrants or outsiders. They have been there for thousands years. But are still labelled anti-national. The British in India started the myth of Muslims as outsiders and invaders. India is now the largest importer of arms in the world – and they use them against their own people too.

Last to speak was Salman Sayyid from the University of Leeds. Sayyid examined gendered Islamophobia and analysed how hate crime against Muslims is played out mostly on the bodies of women. Islamophobia is state sponsored and cannot be reduced to acts of violence on the street. Many Muslims internalise Islamophobia. Salman asked, “Is it something we’ve done? What can we do to fix it?” He continued, Muslims complicate the idea of the nation state because Muslims are everywhere – the most global of all communities. And yet they are constantly painted as the most ‘unglobal’. 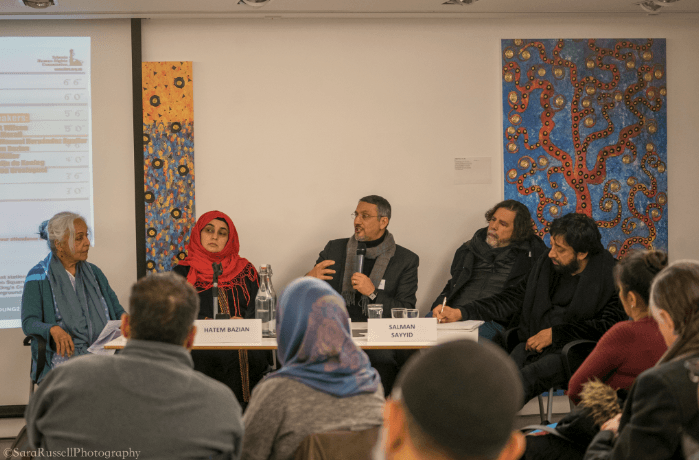 You can see a full gallery of photos from the event here. 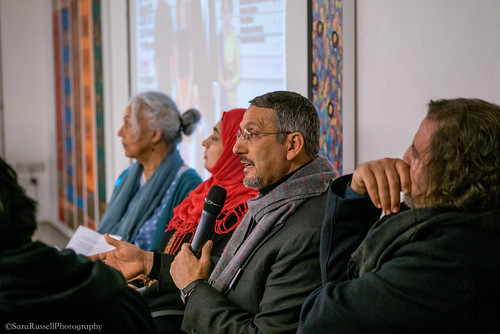 Other Islamophobia Conferences around Europe

The annual Islamophobia conference was also held elsewhere in Europe. On Friday 8 December 2017, Scotland Against Criminalising Communities hosted the conference in Edinburgh. A recent survey by Samena Dean found that more than half of Muslim school students interviewed in Edinburgh had experienced Islamophobia. It is reflected in hate crime, unlawful discrimination, discriminatory and hostile social attitudes and institutional racism. Schools, colleges and universities in Scotland are not immune to this trend.

The focus of the conference in Edinburgh was education. The event consisted of a workshop mainly for young Muslims, a round-table discussion on how to move towards radically anti-racist education and a panel with speakers including Arzu Merali (co-founder and head of research, IHRC, and leading member of DIN), Tasneem Ali (MWAE), Richard Haley (SACC), Sofiah MacLeod (Scottish Palestine Solidarity Campaign) and Yahya Barry. The panel was chaired by Zahid Ali.

In Madrid, Spain, Kale Amenge, member of DIN, and uMMA in collaboration with Bruselles Pantheres hosted an event to confront the growing racism in the Spanish context and to build a Roma-Muslim alliance to fight together both Islamophobia and anti-gipsyism as forms of structural racism in the Spanish state. This event was held on Sunday 10 December. 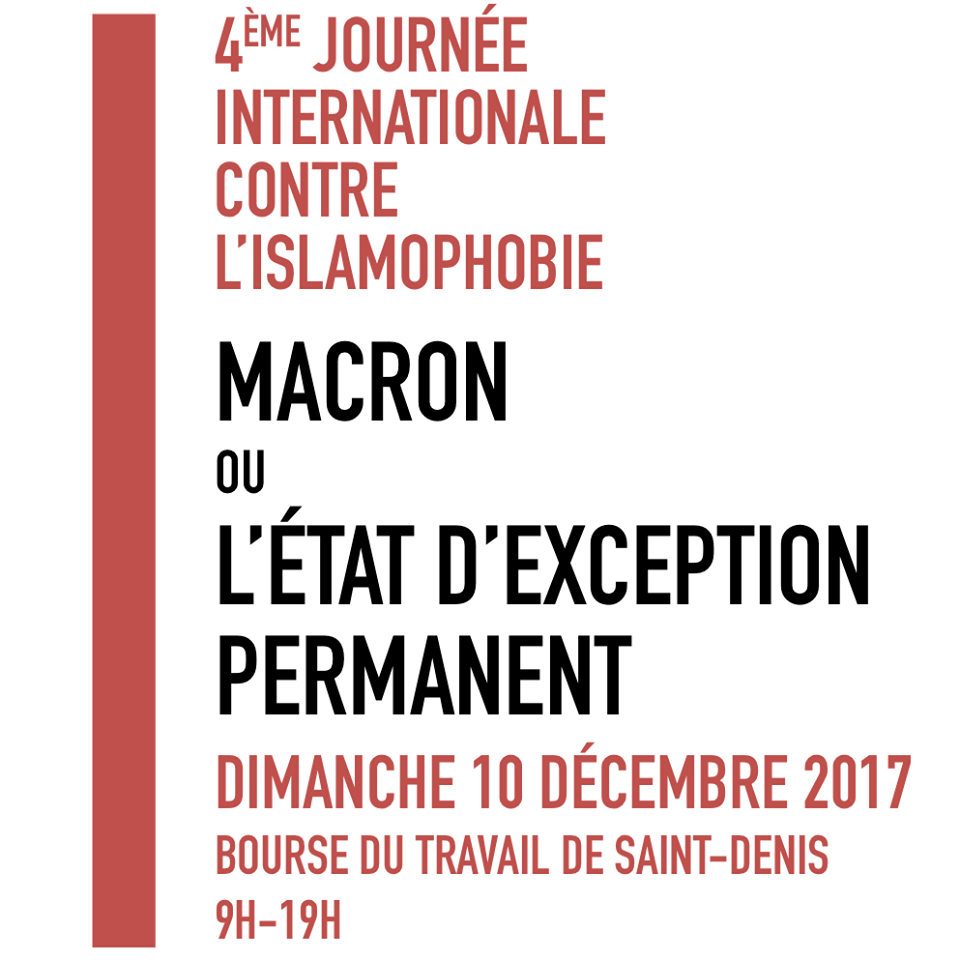 Three sessions included Are antiterrorist law efficient in the fight against terrorism?, The identity attack against public liberties: attacks from everywhere and Silencing political antiracist activists: the other face of the identity attack. The plenary sessions were followed by two workshops: The struggle against discriminations on the workplace and the consequences of the labor law and Stigmatisation of territories: from Saint-Denis to Molenbeek. The day ended with a discussion on the perspectives for the future.

Up to 200 people attended, sharing knowledge and analysis which the main aim and exploring what is islamophobia, how it developed and what are the specifics. 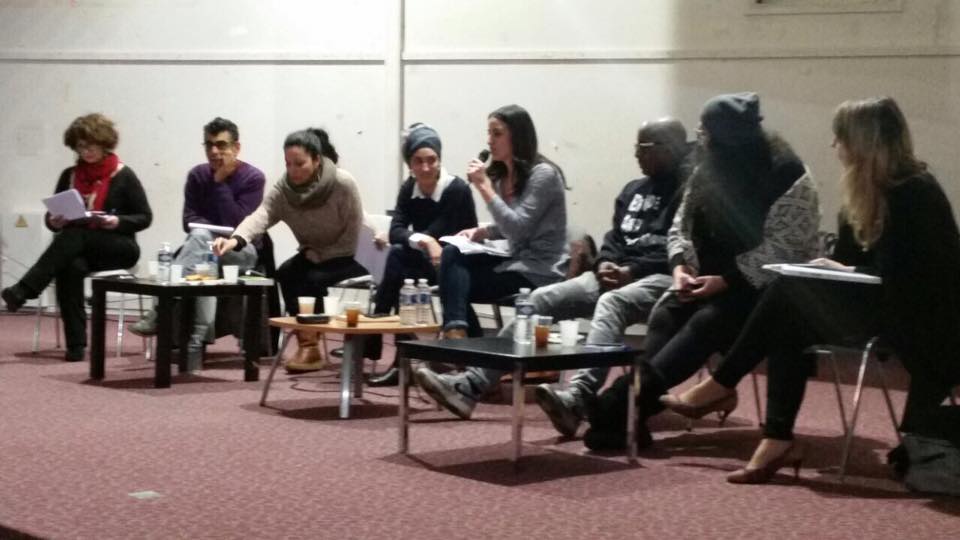 Speakers at the Islamophobia Conference in France

A three day conference in Götenborg, Sweden presented a decolonial analysis of Islamophobia. The conference aims involved to create a space for dissemination of decolonial knowledge, to raise the question of islamophobia and discuss it on local, national and international levels and to create awareness of Morayma, member of DIN, and facilitate networking between organizations and activists. Workshops, a lecture and a conference took place over Friday 15, Saturday 16 and Sunday 17 December and speakers included Ramon Grosfoguel, Hatem Bazian and Sandew Hira.

Up to 40 people attended the conference, mostly women, plus two academics from Gothenborg University and Adrian Groglop for the Institute for Social Work which has a decolonial academic network.