Home
Events
Event Report: It’s Not About the Burqa with Nafisa Bakkar and Malia Bouattia 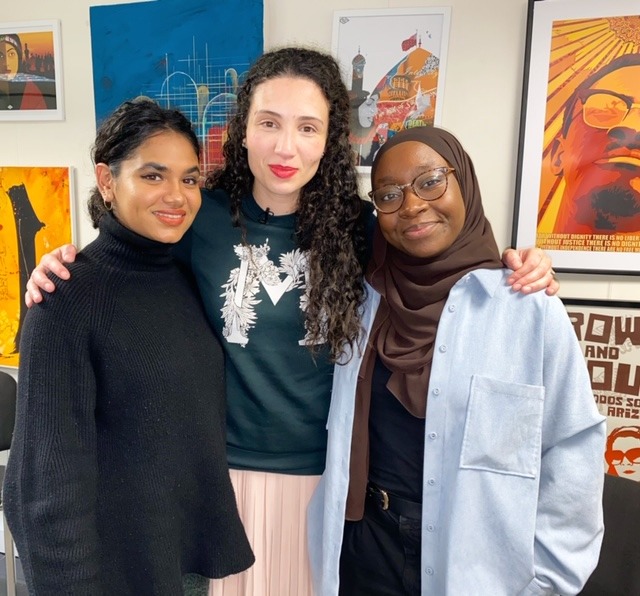 Hafsah Dabiri (author of Basirah the Basketballer Says Insha’Allah) chaired the author evening with Nafisa Bakkar (co-founder and CEO of Amaliah) and Malia Bouattia (former NUS president and presenter on Women Like Us) on Thursday, 12 March 2020. Read below a few snippets of the conversation. The full conversation will be available to watch in due time.

Buy your copy of It’s Not About the Burqa here.

The evening began with introductions of both authors by Hafsah Dabiri, followed by a reading of an excerpt by Nafisa and Malia from their essays in It’s Not About the Burqa.

Hafsah first talked about the way in which Muslim women are used as tools by the capitalist system or by historical colonial structures and asked the authors how that presents itself in the Prevent strategy or with the policing of the hijab. Plus, from the perspective of representation, how are Muslim women being used to uphold structures of misogyny?

Malia responded saying “questions around how the British state perpetuates colonial practices is inextricably linked to questions of capitalism, in which the state polices the masses and those are very much linked particularly when we consider the majority of Muslims in the UK, come from low socio-economic backgrounds. The ways in which the Prevent strategy particularly since the Counter Terrorism Security Act in 2015 came through meant that every aspect of society: education, healthcare, borders, immigration services – absolutly everything was bought into the matrix of surveillance, of countering extremism and finding signs of radicalisation is some way. The constant image fed by the state and mainstream media is hugely racist and racialised. What this has meant is the poorest amongst us who are victims of these policies are in many ways silent victims – we don’t know their names, the violence they have endured – all of these things are happening largely undercover and are targeting the most vulnerable in our society. From a child to an adult, if you ask what do you think of when you hear the word terrorism or terror attacks, a picture of a bearded man or a hijab wearing woman, or someone racialised, or with an accent will always pop up.”

Nafisa said, “at the end of Malia’s chapter, she talks about how Muslim women are asked to be visbile but silent and this ties into looking at representation across brands and the media, there is a certain type of Muslim woman that is asked to be visible and that woman looks very cool and they have a certain type of look… and its the idea of taking up space but still being relatively silent, and that is just another mode of how do we control the narrative and the messaging of who Muslims get to be in public spaces. When they are taking up space, it is not enough… ‘what are we doing with that space?’, ‘what are the terms and conditions of being in that space?’, ‘what is being asked of me to take that space up?’ – what we have seen unfortinately across social media is people seeing putting out versions of Muslim identity which are so highly curated. They are optimal for social viability and that means you cannot talk about certian things. You don’t see YouTube videos about different aspects of Islam that come up in everyday conversations because you won’t get a brand that sponsors that. At the end of the day, everyone is trying to make money and survive. It is a wider conversation on how do Muslim women get to exist in different spheres whether its education, politics, campaigning.”

Malia added, “it is a surreal time as Muslim, racialised women in which we’re sold this idea that empowerment is a t-shirt you can buy and representation is something sought through Instagram, whereas at the same time, policies are repressing and actively silencing us. The question is always structural and the response will always come from the masses, collectively from below. To a certain extent we are all consequences of structures of oppression we endure and we also require and have to emphasise accountability. If you are on a platform and claiming to represent a hugely oppressed and targeted community, then you have to be prepared to be held accountable by that community because you are taking that responsibility. We cannot reinforce this idea, particularly as Muslim women, if we are saying we are not agents of misogyny, internal and external to our community, we are not agents of the state, nor are we of government support – if we ourselves have self-determination, then we have to approach it on that basis, with all those that claim to represent Muslim women as well. They are agents with their own thoughts and actions and then you have to be held responsible for those actions.”

Hafsah asked Malia about her leadership position: “You describe a very real experiences and fears that come along with being a Muslim woman in a position of leadership – has your definiton of what it means to be an activist and challenge structures changed because you began your journey within the NUS? With the challenges you faced, you were in the perfect position to be able to put forward the opinions you had?

To which Malia responded, “my election was a collective response built across movements, particularly through the student movement from anti-racism, Palestine solidarity, free education and so on. We had decided to run not with the idea of assuming the highest position of power in terms of representing the students in the UK was going to deliver us all of those demands, but accessing it meant a bigger platform and the ability to finally understand the nature of the beast of an institution that was contradictory – a union that had for decades worked against the students! We cannot be disillusioned about institutional power but one thing was clear that we were not going to compromise any of those questions and that meant endless violence. Alhamdulilah I had a strong base and people around me and the reminder why I ran for that position in the first place. It was awful and the media was relentless, but it allowed us to see the nature of that system and it meant redirecting resources to the basis that were most vulnerable within the student union.”

Following on from this, Hafsah asked whether the best way for young people interested in activism and/or politics is to go into institutions.

Malia advised, “if you want to work from the belly of the beast, approach it vigilantly and know that this institution will not deliver you liberation. Ensure you have a circle around you that can keep you accountable and grounded. That accountability question I cannot stress enough. We are at a time where we’re scrambling for anything and everything – we’re propping up the likes of Sadiq Khan, who as soon as he is elected, he is on the front of supporting CT legislation, attacking women who are visbily Muslim, voting and supporting every policy that for is contrary to our faith and our line of thinking. But because it is this thing of “you’ve made it!” and just being there means you’ve done us all a service, [which is] absolutely not true. Being there is a good salary and limelight. You are doing no service to your community and full service to yourselves unless you are being challenged, criticised and attacked – that demonstrates more that you are doing the right thing. The question of leadership constantly comes about – this idea of empowering and encouraging Muslim leadership is surreal to me. Leadership organically develops through action – when you organise and mobilise, leaders come through often unwillingly.”

Nafisa responded, “as a Muslim community we struggle with difficult conversations because we are already aware that we are being watched and our words in this room can be taken out of contaxt in another room. [This] means a lot of our conversations and what we should be talking about hasn’t happened and it’s led to a level of being intellectually stunted. Hodan Yusuf, a poet and activist, said ‘in order for communities to grow, it has to come with critique and accountability.’ Why am I entitled to say this mode of operating isn’t right or could be better… I flip flop between knowing that as Muslims we have a code of conduct to uphold and what we are doing here and now is for a much bigger reason. But sometimes we don’t ground our conversations in that actually as Muslims, we have frameworks. Faith is a very personal journey and you can’t expect 1.8 million of us to interact with the deen in the same way. We need to at least ground each other and have honest conversations and acknowledge we are losing our way as communities.”

Malia said, “to be honest, the Islamic Human Rights Commission is probably one of the only organisations where I could get trust, support, real solidarity and political advice from – I am being brutally honest. And where I could guarantee that I wouldn’t be thrown under the bus. You need organisations to understand that things are so complex that they cannot either be just condemned or supported. Now we are at a time where you are expected to come to a political space not having ever not known the nitty gritty of Marx’s arguments on everything or every word Fanon had ever uttered where you knew questions around all forms of structural oppression and cite it religiously… that is a real problem. So when there is process of condemnation, the response is just to throw them out, disassociate and disengage instead of actually doing the work.

During the Q&A, a couple of teachers attending with a group of young girls sought advice from the authors about the younger generation struggling with wanting to be accepted, liked, questioning their faith, having to go through GCSEs and dealing with Islamophobia.

Nafisa beautifully responded by saying, “It is easy to walk around as a Muslim and feel like that you being Muslim is a marker on you that is holding you back in every single aspect of your life. It is understandable to feel like that. But you have to be able to ground it back into the fact that you are Muslim and our faith has incredible hope and mercy. Suhaiymah Manzoor-Khan talks about how it is incumbent as Muslims to be positive and to strive for change – and we often forget that we are centered in another world before we are centered in this world. If I didn’t have Islam I would have lost the plot a long time ago. Your deen is there to safeguard you and that awareness allowed me to carry on.”

Malia and Nafisa answered many other amazing questions from the audience on looking after yourself and self-preservation, marriage, challenges at university, the importance of joining certain societies, the responses Nafisa and Malia received on their chapters in It’s Not About the Burqa, and the future of Muslims influencers.