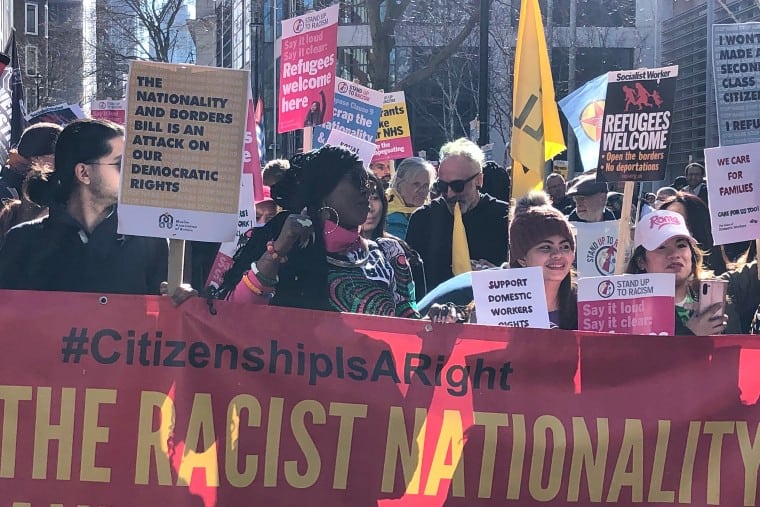 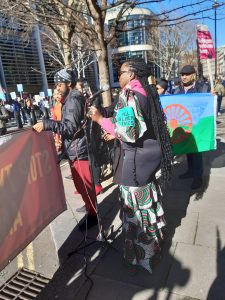 Throughout history colonialism has relied on divide and conquer in order to oppress its victims. In destroying the Aztec Empire, Hernan Cortez relied on their differences with the Tlaxcala, when destroying the Asante Empire, the British has relied on their rivalry with the neighbouring Fante people, and more recently they have relied on turning Sikhs and Muslims or Sunnis and Shias against each other. Perhaps this is what they hoped would stop any strong movement against the xenophobic Nationality and Borders Bill they are currently attempting to pass. If so then they would have been terrified by the sight they saw outside the Home Office and the Houses of Parliament today. A coalition of Black, Sikh, Muslim, Jewish, East & South East Asian, Latin American and anti-racist organisations, leading a march and rally together. Over two thousand people marched in one of the strongest shows of unity seen in London for a long time, refusing to accept this bill that would equally affect all ethnic minorities. 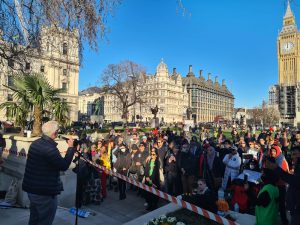 The bill, which would give the government the right to strip citizenship from anyone who they perceive has the ability to get citizenship elsewhere, if they so choose, has been widely criticized as racist by the various organisations, with the Sikh Council UK even banning Tories from their spaces, in response to this bill. The rally began with speeches and chanting outside the home office, before marching to parliament, where they were followed up by more speeches. Speakers included Ahammed Hussain from MPAC UK, who pointed said that our lives will be disrupted and it is up to us as to whether it will be on the governments terms with racist deportations, or on our own, preserving the peace created by “our communities, not them”. IHRC’s Massoud Shadjareh pointed out that historically genocide and ethnic cleansing often starts with the removal of citizenship, or the idea that some people have a higher level of citizenship than others. 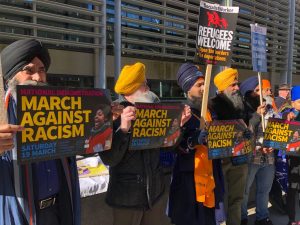 John Maloney of the PCS, said that the PCS alongside the entire Trade Union movement was opposed to this bill and all others that are purposely created to deny us of our rights. Zita Holbourne spoke about how this bill targets refugees and the victims of human trafficking, as part of their attempts at scapegoating them for the problems created by the governments own austerity measures. Abdul Rahman of MAB, stated that the people have the power to, put these politicians in, or take them out of power, and therefore must make clear to these politicians that they cannot get away with passing this bill. Shabbir Lakha said that this bill alongside the Police and Crime Bill, will be used to intimidate ethnic minorities who protest against their warmongering with the threat of deportation. Vy-Liam Ng of EVR said that he was fed up of the rise in racism against East Asian and South East Asian communities in the last few years, and has been made to feel invisible by the way it has been all but completely ignored. Seema Syeda of Another Europe is Possible spoke of how the rise in Brexit racism, has inevitably led us to this point, whilst the Sikh Council UK quoted Priti Patel in some of her attacks against the Sikh community and her attempt to show them as a public enemy and to target them, and MP for Finsbury Park Jeremy Corbyn said that it’s hypocritical for the government to speak about the human rights abroad whilst at the same time as passing this bill which will take away the human rights of people living here, and particularly of Ukrainian refugees who may want to come to this country to escape Russia’s invasion. 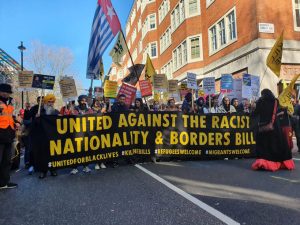 The march was amongst the most multi-cultural seen in a long time, and appears to be building a strong anti-racism alliance, led by organisations representing those who are the actual victims of racism and xenophobia. If, insha Allah, such a group can continue to work together as a united force and grow, then it will cause a threat to the rising racism we have seen in the past two decades, and begin the push back. 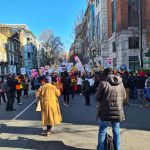 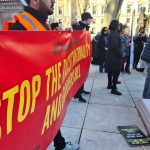 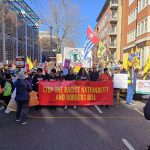 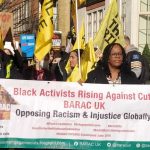 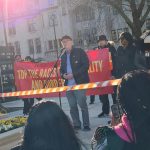